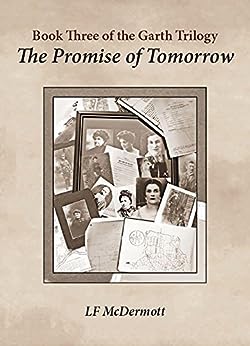 Mike Hannelly
5.0 out of 5 stars A review of the Trilogy
Reviewed in Australia on 12 May 2020
Verified Purchase
Having now read all three, I am sitting here again in tears, so yes an emotive tale.

Following how LF McDermott has brought the stories, weaving the facts and times within has made me conscious that our own stories are still only half written and put aside.

I will take up my writing again and finish my work to honour my convicts, my ‘daughters of Earl Grey’ and bounty immigrants.

Thank you to the friend who recommended this trilogy.
Lis Hannelly.
Read more
Helpful
Report abuse

Janeen A OConnell
5.0 out of 5 stars Seamless movements between generations
Reviewed in Australia on 22 July 2018
I love the way Lynette moves between generations so seamlessly. She takes the reader on a journey through the eyes of one character and cleverly changes to the point of view of another as events change and years march on. We begin the adventure through the eyes of Edward Garth and his wife, Sarah as they leave Tasmania to make a new life in Gippsland in Victoria. As their lives transform, Lynette has their daughter Lil as the central character, and we see the world through her eyes.
What a ride!! This family puts one in mind of gypsies travelling around, seeming as if they don’t belong but enjoying the act of starting over. The author has researched her subject matter diligently.
Sarah Garth (nee Robertson) was an angel. How she put up with the itch that took hold of her husband Edward, every few years was remarkable. I didn’t like Edward, he annoyed me, he seemed to put his own desires for freedom and adventure, mingled with all his frantic money making schemes before his wife and family. But that is what makes Lynette’s storytelling so good, that I was able to become annoyed with some characters and to fall in love with others.
The loss of babies and children, the devastating effect that has on families, how Sarah and later her daughter, Lil were able to move on from those tragedies was one of the strengths of the story.
Lil certainly was a confused woman. Settling for George Stevenson was her biggest mistake, but he appeared a good choice at the time. I thought George was like Lil’s father, Edward Garth, in many ways: always chasing the elusive quick money, struggling to make ends meet to feed the family and facing bankruptcy, and moving his family to the ends of the earth to satisfy a whim. However, Edward was a much nicer person.
The descriptions of the landscapes, the towns and the cities brought the reader into the homes and lives of the characters that live in the pages.
This novel is a journey: through history, through the happiness and sadness experienced in families, the progress of relationships, the building of homes and businesses and the success and failures.
Highly recommended.
Read more
One person found this helpful
Helpful
Report abuse
See all reviews
Back to top
Get to Know Us
Make Money with Us
Let Us Help You
And don't forget:
© 1996-2021, Amazon.com, Inc. or its affiliates