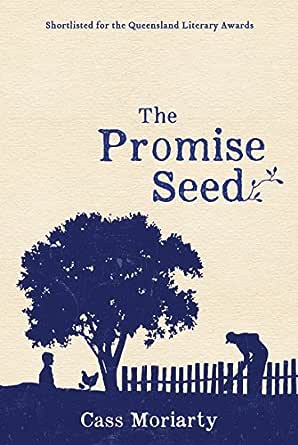 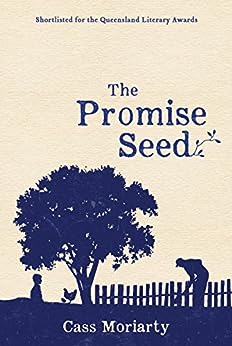 Cass Moriarty lives and writes in Brisbane. She has worked in public relations and marketing, and volunteered as a counsellor in child protective services. She began writing fiction after the birth of her sixth child. The Promise Seed, her first novel, was shortlisted in the Emerging Author category of the 2013 Queensland Literary Awards.

Amazon Customer
5.0 out of 5 stars Poignantly beautiful.
Reviewed in Australia on 31 March 2016
Verified Purchase
A beautifully told story, not s lighthearted tale but a dark storm cloud with a silver lining. My interest took a few chapters to be piqued, but once at that point it slowly reeled me in so that I couldn't put it down. Highly recommend.
Read more
Helpful
Comment Report abuse

Amazon Customer
5.0 out of 5 stars Great quick read
Reviewed in Australia on 27 November 2016
Verified Purchase
Hooked from the start, loved the characters, the story line, the fact that it's local. Felt like I wanted more at the end though, I wasn't ready to leave these people yet! Sign of a good book I suppose lol
Read more
Helpful
Comment Report abuse

Lesley Burnheim
4.0 out of 5 stars Four Stars
Reviewed in Australia on 18 June 2017
Verified Purchase
A great but confronting read, particularly as the setting was my home town.
Read more
Helpful
Comment Report abuse

shorty
2.0 out of 5 stars The ending doesn't make sense
Reviewed in Australia on 28 December 2015
Verified Purchase
Surprised this book was so highly rated. I surmised the author must be immature and inexperienced as a writer. The author portrays a man in his mid 70s as if he in his 90s - and a 12 year old boy as if he is an 8 year old.
Read more
Helpful
Comment Report abuse

Jennifer Cameron-Smith
TOP 10 REVIEWER
5.0 out of 5 stars ‘Suffice to say that life is a long, hard road, and I learnt that lesson early.’
Reviewed in Australia on 11 May 2018
An elderly man, a ten-year-old boy. They are neighbours on a suburban street in Brisbane. The man meets the boy after the boy takes refuge in his garden one afternoon. I don’t think that we ever learn their names, but we do learn about them and their circumstances. The man’s narrative is related to us in the first person, while the boy’s is told in the third. Who are they? What are their stories?

The man is at the centre of the story: we see parts of his life through his eyes. While he’s experienced occasional moments of joy, much of his life has been a series of betrayals, of being abandoned and of abandoning others. He’s wary. He doesn’t want to get to close to others: the pain of leaving or being left is too great.

And the boy? He’s neglected by his mother whose poor judgement reflects her own neediness and insecurity. The boy and the man begin an unlikely friendship. The man lets down his guard, the boy learns about gardening, about chooks and gardening. He also learns of the promise in a seed. But life is not going to suddenly improve and become ‘happy ever after’ for either the man or the boy. The man has a past which will be used to judge him, the boy has a mother he tries to protect.

As I read this story, I kept thinking that unnamed men and boys (as well as unnamed women and girls) live in the streets around each of us. And some of those unnamed people have been damaged (just like the central characters in this book). As I read this story, I’m reminded of just how hard existence can be for some. And how very easily damaged children can become damaging adults.

I found it difficult to put this novel down. I know similar stories: I wish they were all just a fiction. This was Ms Moriarty’s debut novel, and it is a difficult, powerful read. I am left with questions about how we should protect children, especially children in dysfunctional, abusive families. I am saddened by the experiences of both the man and the boy. Yes, our children should be wary of strangers but how cruel, how tragic it is that much of what children need to be wary of will happen within the family?

I hoped that somewhere after the final page of the novel, the man and the boy can find more happiness in their lives. I found this a challenging novel to read. I won’t forget it.

be
5.0 out of 5 stars Cass attended our Book Club.
Reviewed in the United States on 5 September 2017
Verified Purchase
Utterly fantastique - can't wait to read her latest book! A book written in and around our suburbs made it very familiar. So lovely that Cass could come to our ATC Book Club and be bombarded with questions!
Read more
Helpful
Sending feedback...
Thank you for your feedback.
Sorry, we failed to record your vote. Please try again
Report abuse

Catherine Bromilow
4.0 out of 5 stars Its hard to let your guard down. But sometimes worth it
Reviewed in the United States on 17 February 2016
Verified Purchase
wonderful relationship between the two main characters. Both lost souls . Just needing some one to need them . Both had built wall around them
Read more
Helpful
Sending feedback...
Thank you for your feedback.
Sorry, we failed to record your vote. Please try again
Report abuse

pmw
5.0 out of 5 stars Unbelievable
Reviewed in the United States on 20 December 2015
Verified Purchase
There are too many stories like this out there and there shouldn't be. Beautifully and poetically written. A troubling subject with hopefully a good outcome.
Read more
Helpful
Sending feedback...
Thank you for your feedback.
Sorry, we failed to record your vote. Please try again
Report abuse

G Chisholm
5.0 out of 5 stars Sad and beautiful
Reviewed in the United States on 1 May 2016
Verified Purchase
This story of a man and a boy drew my in fairly quickly and had me urging them on. I had to keep reading to see how their relationship grew. I wish they weren't fictional and that I could meet them.
Read more
Helpful
Sending feedback...
Thank you for your feedback.
Sorry, we failed to record your vote. Please try again
Report abuse
Load more international reviews

stine
5.0 out of 5 stars I really enjoyed this book , although I guessed a situation was coming up that I knew would be disturbing & slowed my reading
Reviewed in the United States on 24 January 2016
Verified Purchase
My Review
Read more
Helpful
Sending feedback...
Thank you for your feedback.
Sorry, we failed to record your vote. Please try again
Report abuse

Leanne Miller
5.0 out of 5 stars unable to put down
Reviewed in the United States on 19 October 2015
Verified Purchase
such a great book, with some emotional hard hitting parts but also a light humorous read, have recommended to my book club.
Read more
Helpful
Sending feedback...
Thank you for your feedback.
Sorry, we failed to record your vote. Please try again
Report abuse

therese bowes
5.0 out of 5 stars Five Stars
Reviewed in the United States on 21 June 2016
Verified Purchase
Loved it - transported the reader into a world - dark but interestingly human and insightful
Read more
Helpful
Sending feedback...
Thank you for your feedback.
Sorry, we failed to record your vote. Please try again
Report abuse