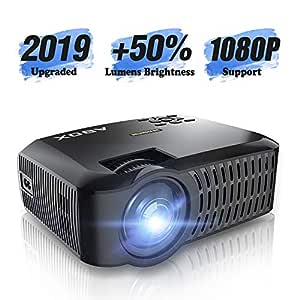 Several Things You Need To Know Before Purchasing a LCD Projector:

The lens is made of sapphire material with high strength and scratch resistance!

See the Wonders with ABOX A2 Projector

Easy to be mounted on a Tripod or on the Ceiling

Darryl Cockman
TOP 500 REVIEWER
5.0 out of 5 stars Great for PS4
24 February 2019
Verified Purchase
The projector is really great for this price. Personally, I never thought that you would get usable projector for such a price.
He arrived super safe packed and was tested on more often. I simply mounted it on a tripod and can then easily align it perfectly.
The fine adjustment can then be adjusted with the adjustable wheels on the projector. The picture is really good no matter if with canvas or without.

It's HD quality, I would say. For comparison, I have a 55 inch 4K TV in the living room and the picture is very similar although it is much larger. But I have also bought an extra canvas for this because I think it brings a lot if a real screen is there. Of course it is always better if the room is nice and dark, as it says in the description.

The menu guidance is easy and for everyone understandable also the function with the picture turn😂.
The fan of the video projector is very quiet which has surprised me very much, I've been a second Mini Beamer for a long time but has gotten old and much louder, a big plus here for me✔.
Everything can be set on the projector or via the remote control.
The connection via HDMI no matter whether with the Smartphone, the PS4 or laptop functions smoothly. I have not tested anything yet.

CONCLUSION
A cheap and good quality, contemporary and quiet projector, you can buy really good.

Finally, a short text. I hope my opinion helps you and you take a few seconds and let me a short click on helpful or useful there, so I see that my time has paid off. Merci👍
Read more
41 people found this helpful
Helpful
Comment Report abuse

Paul
TOP 500 REVIEWER
5.0 out of 5 stars Game changer
12 October 2018
Verified Purchase
I've owned the ABOX A2 LCD for about 2 weeks thus far. I utilize it with my laptop via using the HDMI port, its been plug and play in my experience which has made it very easy to use. I'm planning to use it with my iPad in the future via Lightning to HDMI adapter (Not included).

Its fairly easy and straight forward setting it up, included in the box is a HDMI Cable, 3 way AV (Old school connection) cable, User Manual and Remote.

I have used this projector from a distance of approx 3m and the picture fair for a 720p native resolution. There appears to be a bearable level of noise towards the borders. The fan can be heard, I've recorded the working sound to be 11-12dB as described <15.

A stand-out feature and reason I purchased this projector was the price point and the brightness of the projector. Its stated 3400 Lumens is comparable to significantly more expensive projectors. The brightness is definitely visible when projecting on my wall.

Overall this is a quality designed projector which in my opinion is excellent value for money. Will report back if any changes.
Read more

Duckman
TOP 100 REVIEWER
5.0 out of 5 stars great projector
25 October 2018
Verified Purchase
Great projector!! very easy to set up, compaq and small, easy for storage. Comes with VGA, HDMI cables, just plug in your phone or computer. Picture quality is excellent. You can rotate the lense to adjust the focus and tilt of the screen. I use it on my wall, no need for a projection screen. Overall, i am very happy with this item. strongly recommend!
Editted: Amazon converted my video so its blurry. The video is in fact very clear
Read more

Elizabeth Jane
5.0 out of 5 stars This projector will change your life - it is breathtaking!!!
12 October 2018
Verified Purchase
This projector has changed my life!

This projector arrived very nicely packaged and had full and concise instructions in plain and excellent English, as well as in other languages. After reading the instructions I had no trouble in setting the projector up.

When I turned on this projector and saw what it was capable of I was awestruck. Until then I had been planning to buy a bigger TV than my mere 32” LED LCD TV, but when I experienced home cinema I lost interest in buying a 55” TV. Suddenly I had, what I measured, was a stunning 58” high (nearly 5 foot) by 108” diagonal (9 foot) image. As I live in a small town I had not been to a cinema for 8 years. Suddenly, I had a real movie theatre experience in my lounge room. And I was absolutely mind-blown by it!

Then my good quality CAIWEI brand 100” projector screen that I purchased on eBay for $38 arrived. I thought this would make a big difference, as I had been using my off-white gloss wall, but it was hard to tell the difference, so if you have a white wall you can use as a screen I think that would be fine to use with this projector. The main difference it made was that I had to reduce the image size to fit into the borders of the projector screen. Of course, this would have increased the apparent luminosity of the image, but there was a trade off, and I don’t think the screen itself improved the image noticeably.

I also purchased a 5-way HDMI switch with remote control and a 2 way splitter/amplifier and some HDMI cables for another $32 on eBay. These allowed me to connect my devices, an ABOX TV Box, an Apple TV 3, and a Panasonic PVR to the TV and projector simultaneously, and to switch between and operate these devices with remote controls, without needing to plug and unplug any HDMI cables. This means I can select different media to stream through the projector’s one HDMI input. So even though it has only one HDMI input, unlike some more expensive projectors, with a 5-way switch you can connect up to 5 devices and control which one you want to use with a remote control unit.

With my devices connected I can stream movies and TV series from Netflix, recorded programs from my PVR, live TV through my PVR (as it has a TV tuner in it), catch-up TV such as iView and SBS OnDemand, and Kodi through my TV Box.

There are plenty of options to select from in the projector settings, all accessible by remote control including optimised or personalised colour, picture and sound. There is an inbuilt electronic keystone correction as well as the manual keystone correction and focus, so obtaining clarity of video is not a problem.

In daytime, with the non-blockout curtains I have in my lounge room, the image is still acceptable to watch, but at night, with the lights off, with the room illuminated only by the glow of the projector, you will feel as though you are in a cinema. My friend is shopping for blockout curtains for me in Adelaide so I should soon be able to have the same breathtaking experience of nighttime viewing during the day.

This projector has changed my life. I am amazed that I can now enjoy a cinema experience, of which I have been deprived for so long by distance from a cinema, in my own living room! I definitely recommend this projector. In my opinion, you probably will not want anything else, such as a bigger TV, after having the convenience and experience of the big screen. I think this projector is excellent value based upon looking at the specifications and prices of other projectors, a lot of thought has gone into it, and I am delighted with having purchased it!
Read more

Samir
TOP 50 REVIEWER
5.0 out of 5 stars Best projector with high quality video output
4 October 2018
Verified Purchase
This projector is high quality projector of 3000 lumens. It comes with hdmi cable, input cable, remote control, auxiliary cable and instruction manual. The video quality is perfect. It is better than the projector that I ever bought. I surely recommend this projector.
Read more

31 people found this helpful
Helpful
Comment Report abuse
There are 35 customer reviews and 37 customer ratings.
See all 35 customer reviews
Write a customer review
Get FREE delivery with Amazon Prime
Prime members enjoy FREE Delivery and exclusive access to movies, TV shows, music, Kindle e-books, Twitch Prime, and more.
> Get Started
Back to top
Get to Know Us
Make Money with Us
Let Us Help You
And don't forget:
© 1996-2020, Amazon.com, Inc. or its affiliates