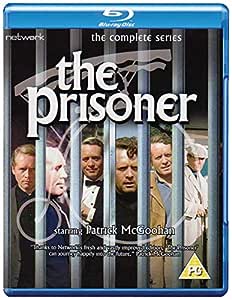 The collected legendary cult TV series starring Patrick McGoohan.The Prisoner centres on a British Intelligence agent (McGoohan) who is kidnapped from his London home and taken to a strange island village, where he's subjected to a brainwashing programme by an unseen foe.His new identity as 'Number Six' is confusing at first, giving way to anger and frustration along with a great desire to get away.Various agents of the mysterious regime that run this island, invariably called 'Number Two' seem intent on finding out why he resigned his covert post in the intelligence service.Number Six gamely attempts to resist the brainwashing of the omnipresent yet unseen 'Number One' whose voice booms at him from every corner of the village and whose eye appears to see all.Number Six's futile attempts at escape only intensify the sensory barrage (including hypnosis, hallucinogenic drug experiences, identity theft, mind control and dream manipulation) of Number One.The series was filmed on location in the rather spooky grounds of Clough Williams-Ellis' Italianate Hotel Portmeirion in North Wales.
Technical Specs: * Languages(s): English
* Interactive Menu

Bob Hoskins
5.0 out of 5 stars Timeless, classic surrealism from the 60's.
29 March 2016 - Published on Amazon.com
Verified Purchase
I watched this series as a kid. I believe I was nine. Groundbreaking stuff at the time. Even then I was attracted to McGoohan's unpredictability and unwavering belief in himself. The kind of person I hoped I'd become. The craziness of the Village, the bizarre order of things, the Guardians roaming around and everything else that went into the making of this wonderful timeless series just fed something in me.

When I saw it had been released on Blu-Ray I was somewhat hesitant. Hesitant because not all the older media transfers well to Blu-Ray and, even if it does, sometimes its age or mechanisms used to create an effect can be exposed for its crudeness. Well, I'm happy to report that, as of watching up to Episode 7 of 17, I've only noticed one such exposure. The floating Guardian ?

I feel like a kid again watching this stuff over. I do remember the show becoming a little self-indulgent towards the end as the surrealism was played up a little to much here and there but, for me, I wont tire of this series. I'll pull it off the shelf every so often and indulge myself in its self-indulgence and relive childhood days.

Summary: Should this set become damaged or lost, I will replace it with the same.

Dr. Greg A. Grove
5.0 out of 5 stars The Prisoner: The Complete Series DVD
16 September 2016 - Published on Amazon.com
Verified Purchase
This complete DVD set of the famous 1960's TV show "The Prisoner" is produced by Arts and Entertainment (A & E). The episodes (all 17 of them) are in stunning color and appear to have been digitized for HD quality. Included are two interviews, an interactive map of The Village, several trailers, and an opportunity to challenge your knowledge via a Quiz a la multiple-choice. Immediate feedback and when you get the question right the test proceeds to the next question. My only disappointment is A & E attempted to arrange the episodes as they thought they might fit best together rather than the order in which they were broadcast. An explanation for their reasons is provided. I would advise the viewer to use the original broadcast order which makes perfect sense: Variety and drama seem to connect from one episode to the next. A marvelous expression of Patrick McGoohan's genius and a sad tribute to secret agents who resign from service.
Read more
28 people found this helpful

TorchwoodFan
5.0 out of 5 stars Multi-region Blu-Ray Player REQUIRED - but you NEED this Blu-Ray version to watch on a 4K TV
10 January 2019 - Published on Amazon.com
Verified Purchase
My old DVD version of the Prisoner looked ok on my old 1080p plasma TV but when I recently upgraded to new LG 4K OLED TV some of my old DVDs looked pretty terrible including my Prisoner set. Too bad that the Blu-Ray version of The Prisoner is no longer available in the US - sure on eBay you can maybe get one for over $200 - but in the UK a more recent re-mastered release in 2017 for the 50th anniversary of the show is still available and it is priced right! It LOOKS FANTASTIC on my new LG 4K OLED TV. It looks as if it could have been filmed last week VS 50 years ago!!!. I am NOT a NUMBER - I am a Prisoner Fan! (and thus deserve this great UK release and so do you)
Read more
8 people found this helpful

Yeah Right
5.0 out of 5 stars One of The Best TV Series Ever
19 November 2017 - Published on Amazon.com
Verified Purchase
This Blu Ray looks fantastic. I’ve had this series on Vhs, Dvd and now Blu ray. The Tv show has been described elsewhere in-depth, so there is no reason for me to describe it, other than that The Prisoner ranks as one of the best Tv shows ever. It seems obvious that the character Number 6 is a continuation of the character John Drake in Danger Man/Secret Agent. This series also follow the idea that if you provide minimal and enigmatic details, that viewers will over analyze, speculate and read more into the plot than the makers intended (like films of Stanley Kubrick and David Lynch).
Apparently, the Blu Ray I bought in 2013 is now out of print, so if there is still a Blu Ray of the complete series available, you should buy it while you can (or at least watch it on a streaming service).
Read more
7 people found this helpful

Michael Gordon
5.0 out of 5 stars Best of Breed if you can figure out the breed.
16 February 2016 - Published on Amazon.com
Verified Purchase
I don't remember how young I was when I first saw this series on television, but I remember being profoundly affected by "The Village" as well as Patrick McGoohan's steadfast sense of self-identity despite many "mind games" being played. I had hoped that by watching the series again now older and wiser I would understand it but maybe it wasn't meant to be precisely understood.
Read more
17 people found this helpful
Go to Amazon.com to see all 464 reviews 4.3 out of 5 stars
Get FREE delivery with Amazon Prime
Prime members enjoy FREE Delivery and exclusive access to movies, TV shows, music, Kindle e-books, Twitch Prime, and more.
> Get Started
Back to top
Get to Know Us
Make Money with Us
Let Us Help You
And don't forget:
© 1996-2020, Amazon.com, Inc. or its affiliates