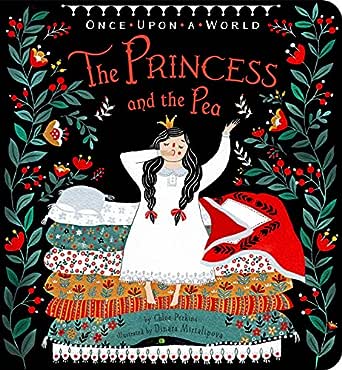 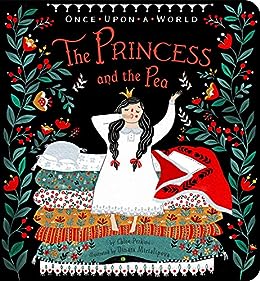 The Princess and the Pea (Once Upon a World) Kindle Edition

Mitch Vane works lots of different mediums. She loves drawing funny wonky pictures, usually with an old fashioned messy dip pen and Indian ink. Mitch has illustrated many children’s books with publishers both in Australia and the U.S.
--This text refers to an alternate kindle_edition edition.

Meriam
5.0 out of 5 stars Beautiful
Reviewed in Germany on 29 April 2020
Verified Purchase
Loved it, the illustrations are beautiful!
Read more
Report abuse

Bookgirl
4.0 out of 5 stars An Active, Adventurous Princess
Reviewed in the United States on 16 November 2018
Verified Purchase
I'm not generally a fan of princess books, but I purchased this particular version of the "Princess and the Pea" for my 3yo and 9mo daughters because of the series' beautiful multiethnic illustrations and was not disappointed.

In addition to featuring a non-blond heroine, the book also emphasizes that there are many different kinds of princesses--clever, strong, funny, artistic, and musical. And unlike many fairytales in which the males travel and the females hide away, passive and inert, this one describes the princess as traveling frequently and enjoying exploring far away places.

Also, rather than marry under intense pressure or by default, the prince and princess are described as falling in love as they realize they have many experiences in common, and a shared adventurous spirit.

Do I still wish that some princess stories weren't centered around marriage at all or that this one didn't portray the mark of a true princess as being extremely hard to please (complaining of sleeplessness because of one tiny pea in her mattress)? Sure. But without the pea, this would be an entirely different story.

All in all, well done.
Read more
3 people found this helpful
Report abuse

Lauren M.
4.0 out of 5 stars Looooove
Reviewed in the United States on 23 December 2018
Verified Purchase
BEAUTIFUL artwork, Dinara is my favorite artist right now-she's amazing!! The book is a board book, and when it arrived the edges were a bit banged up but the book is perfect other than that!
Read more
Report abuse