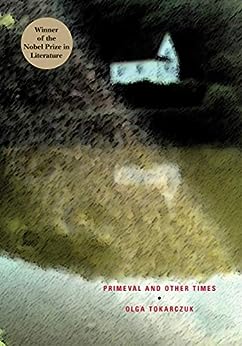 Primeval and Other Times Kindle Edition

Primeval and Other Times is a major novel with a scope and depth rarely achieved in contemporary literature. Its complexity extends beyond the vast number of interrelated characters contained in Tokarczuk's lushly imaginative narrative to the emotional tribulations of several decades in the history of a microcosmic village. Tokarczuk reminds us why we read novels: to enter a fictional world at once completely foreign and poignantly familiar.
-- The Prague Post

The book struck deep chords in readers, who responded to it as if a luminous new way of presenting 20th-century Poland had been found.
--The Economist

The prose of Primeval and Other Times has a strangely sedating effect in reading. Quietly powerful, it is a tale not soon to be forgotten.
-- World Literature Today --This text refers to the paperback edition.

Olga Tokarczuk was born in 1962 in Sulechów near Zielona Góra, Poland. A recipient of all of Poland's top literary awards, she is one of the most critically acclaimed authors of her generation. After finishing her psychology degree at the University of Warsaw, she initially practiced as a therapist and often cites C.G. Jung as an inspiration for her work, in which mythmaking has become a hallmark. Her work has received nearly every major literary award at home and abroad, and Tokarczuk's importance as a writer was recognized with her being awarded the 2018 Nobel Prize in Literature. --This text refers to the paperback edition.

4.6 out of 5 stars
4.6 out of 5
230 global ratings
How are ratings calculated?
To calculate the overall star rating and percentage breakdown by star, we don’t use a simple average. Instead, our system considers things like how recent a review is and if the reviewer bought the item on Amazon. It also analyses reviews to verify trustworthiness.

Ronald Ostrowski
TOP 1000 REVIEWER
4.0 out of 5 stars A strange read yet compelling
Reviewed in Australia on 2 October 2020
Verified Purchase
This book covers a facet of life in a remote part of Poland during WW1 to the end of communism. Strangely excludes the Polish and Soviet War 1919 to 1920. It provides an internalised perception of events as impacts on a number of characters.
Read more
Helpful
Report abuse

Donut
1.0 out of 5 stars Didn’t like it at all.
Reviewed in Australia on 17 October 2020
Verified Purchase
Pretentious try hard writing. You almost see the author trying to be clever.
Read more
Helpful
Report abuse
See all reviews

Vigilantius
4.0 out of 5 stars Earthy, mythic, pessimistic
Reviewed in the United Kingdom on 19 January 2021
Verified Purchase
A cross between folk tale, shamanic myth, dystopian nightmare and a chronicle of central Europe in the 20th century … Primeval is as it says, well, primeval.

The many modes of story-telling change, chapter by chapter, but - fortunately, I think - Tokarczuk opted, as the novel progressed, for an increasingly straightforward narrative, centred on the lives of two families: one, prosperous Polish peasants, and the other, a forest-dwelling, semi-gypsy mother and daughter.

This is history seen from the bottom of rural society, where war is when soldiers come to steal your stores and your daughters, where the coming of Communism is an opportunity for a cushy job as a sanitary inspector, and where sentiment is for folks from the city.

Everything is in the telling, in a rapid-fire style, far from the niceties of irony and subtle dialogue. But depth is there, earthy and real, as are the sort of concrete details which bring the set-piece scenes alive. It’s about the cycle of life and death, and the end of a thousand years of rural life, close to the forests and the rhythms of nature.

Near the end, a wannabe city girl returns to her village to find her father:

‘”You’ve come back too late,’ said her father in the doorway. ‘Everything’s already over. Time to die.”
He laughed, as if he had told an excellent joke. She saw that there was nothing left of his fine white teeth.’

Tokarczuk was awarded the 2018 Nobel Prize for Literature, and in 2019 she published the remarkable Drive Your Plow Over the Bones of the Dead. Primeval is an earlier and less rounded work. But it has the same creative, lively imagination and use of language. It is also deeply imbued with a similar, matter-of-fact pessimism, the vision of a world with no experience of transcendence, no underlying beauty, and no ‘God’. Relationships are strong but wholly instinctive.

There is a telling contrast with the shining works of an earlier Polish (and Jewish) novelist, Isaac Bashevis Singer (1903-1991), who also wrote about everyday folk and who also won the Nobel Prize (in 1978).
Read more
5 people found this helpful
Report abuse

Jonathan Talbot
5.0 out of 5 stars Wonderful
Reviewed in the United Kingdom on 3 May 2020
Verified Purchase
Restored my faith in literature. The best book l will read this year and many others. I cannot recall another book where, upon finishing, l felt like reading it again.
Read more
4 people found this helpful
Report abuse

Sarah Noel
5.0 out of 5 stars Oh my, wonderful
Reviewed in the United Kingdom on 19 January 2015
Verified Purchase
Drift away to the times,and people and games and fields and rivers and mushrooms of Primeval and thereabouts. So enjoyable and maybe time to revisit House of Day House of Night because for a while everything else will appear flat and dull. Olga Tokarczuk has a most amazing way with words as she floats you away from the solid to the ethereal. This is an experience you should have.
Read more
10 people found this helpful
Report abuse

Carol Brown
5.0 out of 5 stars Quality Books
Reviewed in the United Kingdom on 29 September 2020
Verified Purchase
Purchased on behalf of my partner. He is thrilled with the quality and choice.
Read more
One person found this helpful
Report abuse

Angels
2.0 out of 5 stars Book looks second hand and not new
Reviewed in the United Kingdom on 24 December 2019
Verified Purchase
Books sent is in bad quality .. scuffs on the corner dent in the front cover. Specs of dirt on the pages.
Read more
Report abuse
See all reviews
Back to top
Get to Know Us
Make Money with Us
Let Us Help You
And don't forget:
© 1996-2021, Amazon.com, Inc. or its affiliates