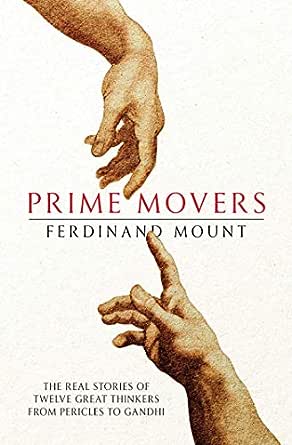 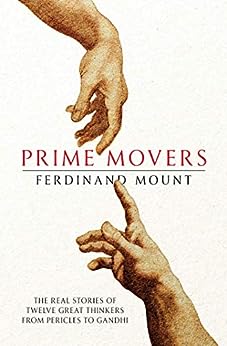 ‘Like many of his books, this one works because he writes so beautifully and with such an appealing personality … In our polarized times there is something to be said for his temperate open-mindedness, and certainly for his sense of humour.’ -- Jeffrey Collins ― Times Literary Supplement

‘Mount’s idea is to map the stars in the firmament of political thought … Thought is the point here, rather than biography, but Prime Movers shines best when the dense intellectual filleting takes a back seat to quirky life story … a beautifully efficient writer.’ -- Hugo Rifkind ― The Times

‘One of the finest essayists in the English language. Mount assesses 12 great political thinkers from Pericles and Jesus to Marx and Gandhi. His book encourages us to go back and read the originals again.’ -- Chris Patten ― The Tablet

‘An engaging collection of extended essays on a disparate bunch of thinkers. Ferdinand Mount is an accomplished writer, he has the knack of summarising complex ideas without giving the reader indigestion, and he contrives to be opinionated without being overly obtrusive.’ ― The Oldie

‘The book surveys in extraordinary detail, and with exceptional insight, the ideas of 12 “Prime Movers”… conservative-minded readers should expect the unexpected.’ ― Spectator

‘Mount has an ability not to be over-impressed by greatness, but at the same time to delight in it – an unusual combination of qualities… These 12 essays need not be read together; are so rich that they are best read separately, each serving as an introduction, or reintroduction, to the thinker under discussion.’ ― Conservative Home --This text refers to the hardcover edition.

Ferdinand Mount was born in 1939. For many years he was a columnist at the Spectator and then the Daily Telegraph and Sunday Times. In between, he was head of the Downing Street Policy Unit and then editor of the Times Literary Supplement. He is now a prize-winning novelist, author of the bestselling memoir Cold Cream, the controversial The New Few and the bestselling The Tears of the Rajas. He lives in London. --This text refers to the hardcover edition.

lisa
5.0 out of 5 stars Five Stars
Reviewed in the United Kingdom on 12 July 2018
Verified Purchase
Well written and imaginative in true Mount style
Read more
Report abuse
See all reviews
Back to top
Get to Know Us
Make Money with Us
Let Us Help You
And don't forget:
© 1996-2021, Amazon.com, Inc. or its affiliates