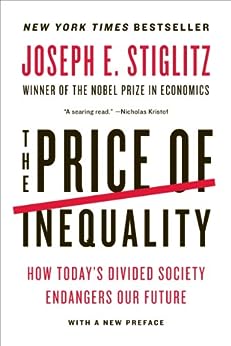 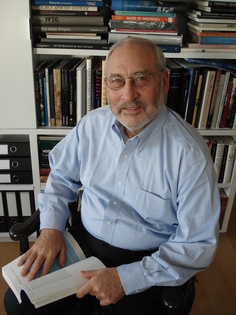 The Price of Inequality: How Today's Divided Society Endangers Our Future Kindle Edition

Joseph E. Stiglitz is a professor of economics at Columbia University and the recipient of a John Bates Clark Medal and a Nobel Prize. His books include Globalization and Its Discontents, The Three Trillion Dollar War, and Making Globalization Work. He lives in New York City.

Paul Boehmer is a seasoned actor who has appeared on Broadway, film, and television, including The Thomas Crown Affair and All My Children. Coinciding with another of his passions, sci-fi, Paul has been cast in various roles in many episodes of Star Trek. --This text refers to the mp3_cd edition.

Paul Boehmer's deep but gentle tone provides a comforting voice for the harsh realities that Stiglitz reveals....More importantly, Boehmer knows how to project the key sentences of every paragraph, bringing home Stiglitz's point and giving the listener its full weight.-- "AudioFile" --This text refers to the audioCD edition.
Read more

Joseph E. Stiglitz is a professor of economics at Columbia University and the recipient of a John Bates Clark Medal and a Nobel Prize. He is also the former senior vice president and chief economist of the World Bank. His books include Globalization and Its Discontents, The Three Trillion Dollar War, and Making Globalization Work. He lives in New York City.

4.5 out of 5 stars
4.5 out of 5
914 global ratings
How are ratings calculated?
To calculate the overall star rating and percentage breakdown by star, we don’t use a simple average. Instead, our system considers things like how recent a review is and if the reviewer bought the item on Amazon. It also analyses reviews to verify trustworthiness.

Jeannieic
5.0 out of 5 stars Excellent read
Reviewed in Australia on 20 August 2014
Verified Purchase
I have no economics background at all so I found it was quite hard to read, but it was worth it. It gave voice and numbers to the feeling I've had that something is amiss in our system. A thoroughly informative and interesting book.
Read more
2 people found this helpful
Helpful
Report abuse

carl
5.0 out of 5 stars Economics clearly stated.
Reviewed in Australia on 8 May 2015
Verified Purchase
Joseph Stiglitz has really described how it really is for us. First class, persuasive material.
Read more
One person found this helpful
Helpful
Report abuse
See all reviews

Firdaus Vogt
3.0 out of 5 stars Excellent message, pity about the delivery
Reviewed in the United Kingdom on 23 August 2017
Verified Purchase
Stiglitz's message, debunking neoliberalism and austerity, is an excellent one. So are his explanations of the dangers of inequality from both an economic and social point of view, particularly the failure it is indicative of with regard to democracy and the rule of law and the threats it represents to both. Encouragingly, he also offers cogent solutions. This is such an important book that it is a great pity it is so poorly written. It is replete with long-winded and complex sentences, annoying repetition and unexplained assertions that appear to have been tossed into sentences simply for good measure. I challenge anyone to absorb an entire chapter without putting the book down a number of times out of exasperation. This is a book that deserves the widest of audiences; but, sadly, it will not get it.
Read more
11 people found this helpful
Report abuse

J. lee
4.0 out of 5 stars Excellent message but not the best delivery
Reviewed in the United Kingdom on 12 March 2019
Verified Purchase
I've read several books critiquing todays global capitalist market based economy, and I have to say that although Stiglitz brings up a tonne of excellent points, its worth noting his delivery of them is usually quite lax. I feel in efforts to simplify a lot of the text for the average reader, a lot of key details in certain anecdotes are left out and relegated to the notes section at the back (which ends up being more than 1/3rd of the book). On the other hand, several areas were difficult to to comprehend given the jargon used (many jargon terms were used extensively for a few chapters, only to be eventually defined way later in the book).

In addition, like most other books, there is very little detail given to possible solutions to the crisis. Its very easy to criticise something for 300 pages, but if you plan on doing so you should at least give some serious effort to the solutions you would present-more than just a small chapter at the end!

Also worth noting that this book was written in 2012, given the 2016 presidential campaign and messaging by both parties since, some of the points are actually inaccurate (like when he mentioned that even the slightest whiff of expanding medicare would be enough to end a Democratic campaign). But if you are interested in that, or are willing to sit through it for what is overall an excellent description of many of the problems behind the last recession and those before it, check this book out
Read more
One person found this helpful
Report abuse

autodidact
5.0 out of 5 stars An Authoritative and Trenchant Critique of Austerity
Reviewed in the United Kingdom on 3 August 2015
Verified Purchase
Since the US is further ahead in the destruction of the welfare state than the UK, it is not surprising that the most trenchant criticisms have come from there. Stiglitz is no wild-eyed radical. A nobel laureate for economics who served in the Clinton administration, he gives a very clear and well-documented critique of the drive to austerity.

In assessing the rich 1%, he differentiates wealth gained from 'rent-taking' from other forms. This, he argues, is simply money taken out of the economy. That this wealth enriches everyone by a 'trickle-down' process he exposes as a myth. It simply hasn't happened.

CEO's of large companies have increasingly enriched themselves by huge bonuses as 'incentive payments' when any rise in profits is outside of their control. And they have not taken any corresponding hit when the market slumped during the recession. Money from taxation has been handed out in the form of hidden subsidies to large companies in many ways, not least in the bank bailouts, whilst aid to the poor has been cut. And yet, because the poorest in society spend most or all of their money by necessity, boosting the pay of the poorest is the best way of increasing demand in society and helping economic recovery.

Tax cuts for the rich do not increase the total amount of tax received by the government, as is often claimed. The historical record in the US since the Reagan administration show that this simply did not happen.

I will not attempt to precis the contents of the book any further. I think this book is an essential read to understand why the ideological attack on the welfare state makes life so much worse for the majority of people, not just those on benefits.
Read more
3 people found this helpful
Report abuse

SPRish
4.0 out of 5 stars And it is a pretty convincing argument
Reviewed in the United Kingdom on 18 June 2016
Verified Purchase
Disturbing attack on today's capitalism and world's elites who the author says create establishments that ensure thet they keep the power and the money forever. And it is a pretty convincing argument. Sadly, Dr Stiglitz spends much time making his case that there is indeed inequality and far too little time laying out a plan for a better method of governance in the West.
Read more
2 people found this helpful
Report abuse

This is a good book.

As a minor point, I feel that a few aspects of it have moved on (which is understandable since I read it 7-8 years after publication).
Specifically, I think that we have a better/broader understanding of some of the aspects relating to the GFC, but I was happy to skip past these parts and appreciate its strength is inequality.
Read more
Report abuse
See all reviews
Back to top
Get to Know Us
Make Money with Us
Let Us Help You
And don't forget:
© 1996-2021, Amazon.com, Inc. or its affiliates