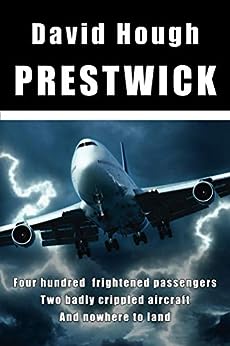 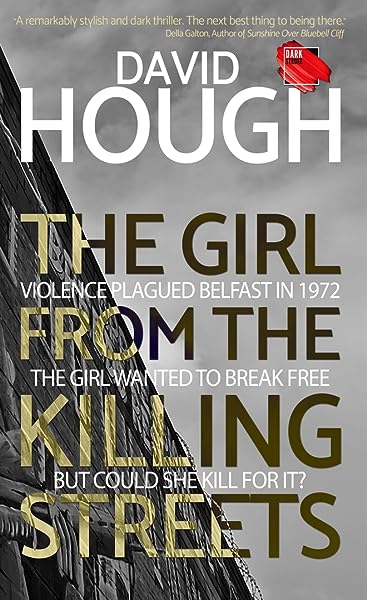 by David Hough (Author) Format: Kindle Edition
See all formats and editions
Sorry, there was a problem loading this page. Try again.
Prestwick by David Hough

A freak mid-air collision cripples a trans-Atlantic 747 and a US Air Force jet. Against the clock and overwhelming odds, the planes’ crews – or what’s left of them – struggle to save the on-board survivors. Meanwhile an obsessed narcotics detective tries to pin drug smuggling and murder on two suspects on board the crippled 747.

As the weather deteriorates, most Scottish airports are closed, leaving Prestwick the only airport available for a safe landing. However, Prestwick has its own emergency to deal with, something that overshadows all other problems. Landing permission is refused and more than four hundred people are condemned to an almost certain death over icy, blizzard-swept seas.

Can things get any worse? They can – and they do...

David Hough whips his reader along in a roaring jet stream of action and high tension that buckles the reader to his seat. A breathtaking, whirlwind of a thriller.

About the author:
David Hough was born in Cornwall and grew up in the Georgian City of Bath. He spent forty years working as an air traffic controller in Northern Ireland, Scotland and England before retiring early in 2003 and becoming a writer. David has written over 20 novels and enjoys writing "a rattling good yarn with a dose of hard grit". He now lives with his wife in Dorset, on the south coast of England.

Katherine Smith, an award winning writer, says: "Mr. Hough is an immensely gifted writer with a unique voice and he never disappoints. If you want compelling action, riveting dialogue, and characters you will remember long after you've closed the book, I highly recommend anything by this unforgettable author."

I was born in Cornwall, a distant relative of the historian, A L Rowse. However, because of my father's work, I lived in the Georgian City of Bath from the age of two. To some extent my love of books was fostered by a competent English teacher at my old secondary school. It was housed in a Georgian edifice called Weymouth House, a building that was a piece of history. I never understood why they pulled it down to build a Marks and Spencer store.

On the mortgage-paying work front, I spent forty years working as an air traffic controller in Northern Ireland, Scotland and England. The last twenty three years were spent at the College of ATC at Bournemouth Airport. I retired early in 2003 and dedicating my life to writing.

My love of books, which began in school days, has never waned over the years. In particular, I have a keen interest in historical fiction, which is why I wrote three novels about the area of Cornwall in which my ancestors lived. They are titled: In the Shadow of a Curse, In the Shadow of Disgrace, and In the Shadow of Deception. I also wrote about the history of the relationship between England and Ireland in The Gallows on Warlock Hill. Having spent most of my working life in aviation, that subject crept into King's Priory and, to a much greater extent, in Prestwick, Heathrow and Dead Reckoning. Other novels followed as the years passed. As a dedication to my grandfather, I wrote about World War One in two book called, In Foreign Fields and In Line of Fire. My latest novel is The Girl From the Killing Streets.I continue writing because I enjoy it.

You can read more at thenovelsofdavidhough.com

4.4 out of 5 stars
4.4 out of 5
130 global ratings
How are ratings calculated?
To calculate the overall star rating and percentage breakdown by star, we don’t use a simple average. Instead, our system considers things like how recent a review is and if the reviewer bought the item on Amazon. It also analyses reviews to verify trustworthiness.

Mr. K. A. Harrison
4.0 out of 5 stars it was a darn good read and not an easy book to put down
Reviewed in the United Kingdom on 16 September 2014
Verified Purchase
I make this review as a retired professional pilot. 18 years in Royal Air Force and then as an airline pilot covering a career of 40 years.

The author certainly takes a few liberties and many of the scenarios are scarcely credible. Having said that, it was a darn good read and not an easy book to put down.

An appendix of the characters would have been useful. I lost track who was screwing who!!!

A. H. Murray
5.0 out of 5 stars Brace!! Brace!!
Reviewed in the United Kingdom on 11 June 2015
Verified Purchase
Well then Mr Hough! I read every aviation related book that I can get my hands on and this one I can safely say had me totally hooked. Excellent piece of work and the degree of technical accuracy could come only from a professional.

Brilliant and as enjoyable as Fate is the Hunter and that, my friend, is praise indeed!

Mr. Douglas Moore
5.0 out of 5 stars Page turner
Reviewed in the United Kingdom on 7 May 2013
Verified Purchase
This is a thriller that gets straight down to business. It is engaging and gives a behind the scenes insight to air traffic and aircrews.

I had the pleasure of working with David (as a member of the support staff) when he was based at Atlantic House. I'm glad our shifts together were not as eventful as described here. Always the gentleman and a pleasure to work with.

Roy
5.0 out of 5 stars Edge of the seat thriller
Reviewed in the United Kingdom on 23 February 2018
Verified Purchase
I read this straight after Heathrow by the same author. Totally different but both gripping in different ways. I could relate to all aspects of this book and found them to be very accurate. An amazing book. Other aircraft books have a lot to live up to.
Read more
One person found this helpful
Report abuse

Mrs Vivienne Blundell
5.0 out of 5 stars Brilliant
Reviewed in the United Kingdom on 14 December 2021
Verified Purchase
First book to keep me reading into the night A read page turner. !oved it