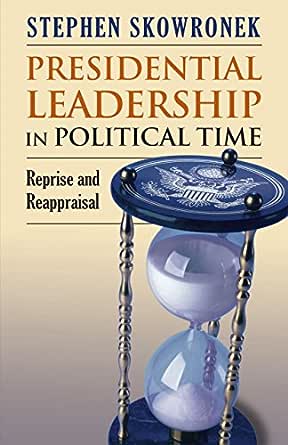 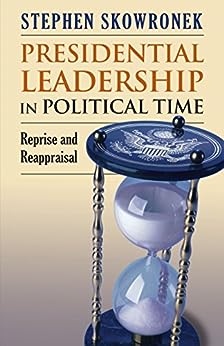 "Nobody unearths the hidden patterns in American political history like Stephen Skowronek. With this brilliant new work, he scans the centuries to illuminate the dynamics that have made some presidents the master of political time - and others its victim." Ron Brownstein, Los Angeles Times national affairs columnist "Showing us the presidency in a whole new light, Skowronek illuminates the patterns of presidential politics from the earliest chief executives to administrations yet to come. His bold analyses of Bill Clinton and George W. Bush are superior to anything else out there." Bruce L. Miroff, author of The Liberals' Moment "A brilliant, provocative reading of presidential history that sparkles with originality and insight." Richard Ellis, author of Founding the American Presidency"

A bestselling classic with a new chapter on President Barack Obama

Renowned scholar Stephen Skowronek's insights have fundamentally altered our understanding of the American presidency. His "political time" thesis has been particularly influential, revealing how presidents reckon with the work of their predecessors, situate their power within recent political events, and assert their authority in the service of change. In the original edition of this book, Skowronek revisited that thesis to make better sense of the presidencies of Bill Clinton and George W. Bush. In this new edition, he also addresses the first two years of Barack Obama's presidency.

Already considered a classic and widely used in courses on the presidency, Skowronek's book has greatly expanded our understanding of and debates over the politics of leadership. It clarifies the typical political problems that presidents confront in political time, as well as the likely effects of their working through them, and considers contemporary innovations in our political system that bear on the leadership patterns from the more distant past. Drawing out parallels in the politics of leadership between Andrew Jackson and Franklin Roosevelt and between James Polk and John Kennedy, it develops a new and revealing perspective on the presidential leadership of Clinton, Bush, and now Obama.

In this edition, Skowronek devotes an entirely new chapter to Obama's presidency and its prospects for becoming transformational-like the presidencies of Jefferson, Jackson, Lincoln, FDR, and Reagan, all of whom succeeded to varying degrees in reconstructing the playing field of national politics. Along the way, he wonders if this kind of leadership is still even possible, given the current divided state of the American polity. He also takes a fresh look at the impact of the twenty-four-hour news cycle, of a more disciplined and homogeneous Republican party, of conservative advocacy of the "unitary theory" of the executive, and of progressive disillusionment with the presidency as an institution.

A provocative review of presidential history, Skowronek's book brims with fresh insights and opens a window on the institution of the executive office and the workings of the American political system as a whole. Intellectually satisfying for scholars, it also provides an accessible volume for students and general readers interested in the American presidency.
See all Product description
click to open popover

Hector Horace Munro, PhD
5.0 out of 5 stars A Paradigm Change in how we assess presidents
26 October 2015 - Published on Amazon.com
Verified Purchase
A uniquely powerful book that turns orthodoxy on its head and moves the political science from a presidential analysis built on personality and popularity to a field that underscores the importance of both institutions, historical contingencies, and regimes. A clear win for those that argue that the field must escape from reductionism.
Read more

Rick Mayo
4.0 out of 5 stars A very thorough research and presentation of Presidential character
9 June 2015 - Published on Amazon.com
Verified Purchase
A very insightful study of the characteristics and focus of not only the votary but the presidential office holders and their intentions. The revision is very well researched but does give too much leeway to Obama. There needs to be more focus on the attempt to force a transitional presidency by Obama which his policies and politics are not bi-partisan enough to achieve. In a few years this work will be a foundational guide to timelines of presidents.
Read more

Becky Black Powell
4.0 out of 5 stars A Way to Look at the Presidency
17 January 2013 - Published on Amazon.com
Verified Purchase
Skowronek writes this scholarly batch of essays as a reprisal of his earlier book. This book includes writing on the second Bush and the Obama presidencies. His basic argument is that presidencies can be analyzed through "political time." Skowronek outlines how political time has cycled through the years of American history. Political time is his name for the cycle of advocating, and then supporting a particular political bent. I used this book with my homeschooled senior, and it was a jump off point for some great discussion. It also sparked me to look more deeply into the American presidency, something that captured my imagination as a child, but that I, regretfully, have not studied recently. The book is well written and Skowronek's theories insightful.
Read more
3 people found this helpful

Morley Winograd
5.0 out of 5 stars Must Read for You and President Obama
6 January 2013 - Published on Amazon.com
Verified Purchase
Stephen Skowronek is the preeminent presidential historian alive today. He has created the most insightful and useful way to think about the performance of all of our presidents' performance by taking into account the political circumstances under which they were elected. If you liked the movie, "Lincoln," for instance, you will gain further insights on how the actions depicted in the movie helped make Honest Abe one of our few transformative presidents. In his newest book, "Presidential Leadership in Political Time: Reprise and Reappraisal," Skowronek examines both the promise and the potential pitfalls for President Obama as well. Whether or not Obama joins the ranks of our truly transformative presidents or not may well be determined by how well he absorbs the lessons of this outstanding book. You should read the book, and so should the president.
Read more
2 people found this helpful
Go to Amazon.com to see all 5 reviews 4.6 out of 5 stars
Get FREE delivery with Amazon Prime
Prime members enjoy FREE Delivery and exclusive access to movies, TV shows, music, Kindle e-books, Twitch Prime, and more.
> Get Started
Back to top
Get to Know Us
Make Money with Us
Let Us Help You
And don't forget:
© 1996-2020, Amazon.com, Inc. or its affiliates