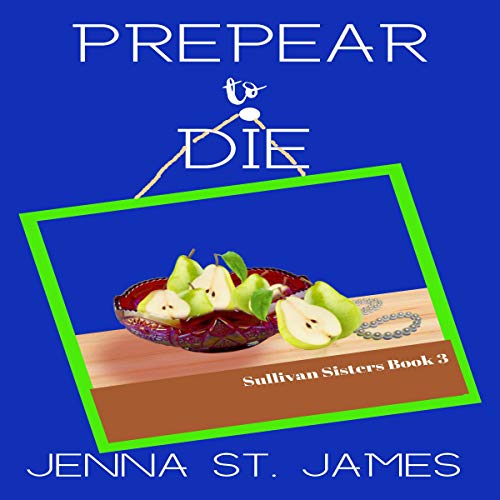 It’s mid-August in Traveler’s Bay, and Jaycee Sullivan is not only busy preparing for an Agatha Christie-themed party at her bookstore and bar Gone with the Whiskey, but Gramps and Tillie are tying the knot soon, and there’s still no venue in sight.

As Jaycee and the girl gang scramble to find a solution to their wedding problem, Gramps gives Jaycee the surprise of a lifetime. a military friend is in trouble, and Gramps needs to enlist Jaycee’s help.

Korean War veteran and long-time hermit Len Sadowski is tired of someone coming onto his property and terrorizing him and his dog Old Blue. When Mr. Sadowski blows a hole the size of Texas in his front door, he must admit he can no longer see and shoot like he used to.

Mr. Sadowski supplies Jaycee and Gramps with three suspect names, and Jaycee promises to look into who is intimidating him. Unfortunately, Jaycee discovers too late that Mr. Sadowski may not have much time left.

As the clock ticks down for Mr. Sadowski, Jaycee recruits the help of Jax, Heidi, and Bridget, and between alien encounters, car crashes, family dinners, and an Agatha Christie party, Jaycee must try and solve the puzzle of who wants Mr. Sadowski dead and why.

Read more
©2018 Jenna St. James (P)2020 Jenna St. James
Previous page
Next page
Learn more about membership
By completing your purchase, you agree to Audible’s Conditions Of Use and Privacy Notice.
Sold and delivered by Audible, an Amazon company
Share

4.8 out of 5 stars
4.8 out of 5
56 global ratings
How are ratings calculated?
To calculate the overall star rating and percentage breakdown by star, we don’t use a simple average. Instead, our system considers things like how recent a review is and if the reviewer bought the item on Amazon. It also analyses reviews to verify trustworthiness.

Thomas
5.0 out of 5 stars Great
Reviewed in the United States on 4 January 2020
Verified Purchase
A friend of one of Gramps' friends asks to speak to "The dame with a brain" meaning his grandaughter Jaycee Sullivan.
Len Sadowski is almost a hermit, and is also a collector of antiques. He heard about Jaycee's success in helping solve past crimes and wants to hire her to find out who is breaking into his home.
Gramps is okay with it as it doesn't seem to be too dangerous.
Several events prove Gramps was not right, and once again Jaycee is in danger.
And all she wanted to do was throw a 1920s style Agatha Christie themed party.
Read more
One person found this helpful
Report abuse

Sue Turkington
5.0 out of 5 stars Definitely need to read
Reviewed in the United States on 7 September 2020
Verified Purchase
I stumbled on this series because I got the first one free and have been hooked every since. This series just keeps getting better! Just bought number four and can’t wait to see what happens and if the wedding happens
Read more
One person found this helpful
Report abuse

Jessica King
5.0 out of 5 stars YESSSSSSSSS!
Reviewed in the United States on 25 December 2018
Verified Purchase
Jenna St James has done it again! The story captures you from the beginning and never lets you go!! Jaycee keeps you on your toes the whole way through and the special alone time with Mike lets you know they have a special connection!! Please tell me #4 is coming soon!!!!
Read more
One person found this helpful
Report abuse

Kindle Customer
5.0 out of 5 stars Ha fabulous fun family read
Reviewed in the United States on 23 October 2018
Verified Purchase
Reality can be exciting fun group of characters and a very surprise ending
This story flows with just the right twists and turns
Please pass the bourbon balls
Thank you
Read more
Report abuse

Kindle Customer
5.0 out of 5 stars Great great mystery series.
Reviewed in the United States on 9 May 2021
Verified Purchase
I love your mystery series, all of the. I can't wait to get the next one. Your characters are great and I can visulize the characters while they tend bad or tag business or throw a knife between their toes. Great stories.
Read more
Report abuse
See all reviews
Back to top
Get to Know Us
Make Money with Us
Let Us Help You
And don't forget:
© 1996-2021, Amazon.com, Inc. or its affiliates