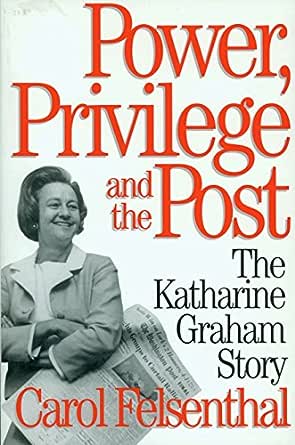 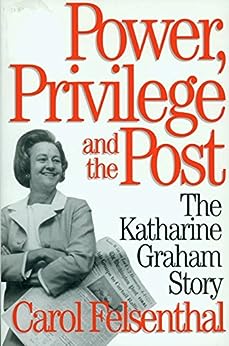 Katharine Graham's story has all the elements of the phoenix rising from the ashes, and in Carol Felsenthal's unauthorized biography, Power, Privilege, and the Post, Graham's personal tragedies and triumphs are revealed. The homely and insecure daughter of the Jewish millionaire and owner of The Washington Post, Eugene Myer, Kay married the handsome, brilliant and power hungry Phillip Graham in 1940. By 1948 Kay's father had turned control of The Washington Post over to Phil, who spent the next decade amassing a media empire that included radio and TV stations. But, as Felsenthal shows, he mostly focused on building the reputation of the Post and positioning himself as a Washington power-player. Plagued by manic depression, Phil's behavior became more erratic and outlandish, and his downward spiral ended in 1963 when he took his own life. Surprising the newspaper industry, Kay Graham took control of the paper, beginning one of the most unprecedented careers in media history.
Felsenthal weaves her exhaustive research into a perceptive portrayal of the Graham family and an expert dissection of the internal politics at the Post, and a portrait of one of a unique, tragic, and ultimately triumphant figure of twentieth-century America.

CAROL FELSENTHAL is the author of several acclaimed biographies, including the best-selling Power, Privilege, and the Post: The Katharine Graham Story; Princess Alice: The Life and Times of Alice Roosevelt Longworth; and The Sweetheart of the Silent Majority: The Biography of Phyllis Schlafly.
click to open popover

Ron B.
5.0 out of 5 stars Really Great Read!
3 October 2018 - Published on Amazon.com
Verified Purchase
I bought this book after seeing the move "The Post". I wanted to know more about Katherine Graham. This author really took the time to research and explore the history behind the many people involved in the evolution of the Washington Post. This is an easy read and is full of interesting historical memorabilia of people. It is extremely well documented. I am glad I bought the book and would recommend it to anyone who wants to know more about the subject.
Read more
2 people found this helpful

Michael J
4.0 out of 5 stars Phil and Kay - wapo owners
27 March 2018 - Published on Amazon.com
Verified Purchase
Power, Privilege and the Post terminates in 1992 with entirely too much detail about recent events then, however exploring Phil's and Kay's families, and the couple's separate approaches to owning the Post moves quickly. I found the early part of the book fascinating but my eyes glazed over reading the last part. If Phil hadn't dramatically taken himself out of the picture, the Post wouldn't have gotten the magnificent stewardship provided by Katharine. It is of an era - no Internet or blogs and only primitive personal computers.
Read more
2 people found this helpful

Elinor Stickney
3.0 out of 5 stars Katherine Graham's rise to the Washington Post
30 October 2013 - Published on Amazon.com
Verified Purchase
I am admirer of Katherine Graham and the author obviously was not. The book was a view of her life from childhood to the time she retired from the job she had to take....running her family's newspaper. Apparently The Washington Post was a small paper when she stepped in, after her husband committed suicide. Events, such as the Watergate issue helped build the national and international reputation of the Post. Mrs. Graham,fortunately, had ready access to a number of various experts to help in her management of the paper;
Read more

swimgal
3.0 out of 5 stars Worth your time
16 August 2014 - Published on Amazon.com
Verified Purchase
I'm reading this for a book club selection. Much more interesting than I expected. Well-written, in parts a bit slow-going, but overall well-researched and good biography of a powerful woman.
Read more
One person found this helpful
Go to Amazon.com to see all 10 reviews 3.7 out of 5 stars
Get FREE delivery with Amazon Prime
Prime members enjoy FREE Delivery and exclusive access to movies, TV shows, music, Kindle e-books, Twitch Prime, and more.
> Get Started
Back to top
Get to Know Us
Make Money with Us
Let Us Help You
And don't forget:
© 1996-2020, Amazon.com, Inc. or its affiliates