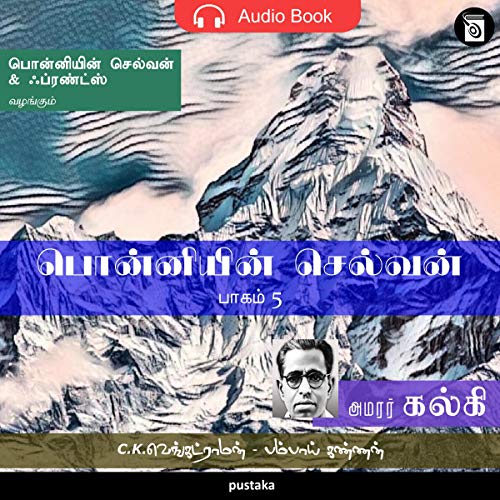 Ponniyin Selvan is a historical novel by Kalki Krishnamurthy, written in Tamil. In five volumes, it tells the story of early days of Arulmozhivarman, who later became the great Chola emperor Rajaraja Chola I. The book took more than three years to write; Kalki visited Sri Lanka three times to gather information for it.

Ponniyin Selvan is widely considered by many to be the greatest novel ever written in Tamil literature. It was first published as a series in the Kalki, a Tamil language magazine, during the 1950s and was later integrated into a novel. The craze for the series, which was published weekly, was such that it elevated the magazine circulation to reach a staggering figure of 71,366 copies - no mean achievement in a newly independent India.

Even today, the novel has a cult following and fan base among people of all generations. The book continues to be admired and garner critical acclaim for its tightly woven plot and vivid narration, the wit of the dialogue, and the way in which the power struggle and intrigues of the Chola empire were depicted.

Please note: This audiobook is in Tamil.

4.7 out of 5 stars
4.7 out of 5
175 global ratings
How are ratings calculated?
To calculate the overall star rating and percentage breakdown by star, we don’t use a simple average. Instead, our system considers things like how recent a review is and if the reviewer bought the item on Amazon. It also analyses reviews to verify trustworthiness.

Manjuvijay
5.0 out of 5 stars Mesmerising
Reviewed in the United Kingdom on 1 November 2021
Verified Purchase
Even after more than 70 years , the story keeps the readers riveted. A great contribution to Tamil history.. the author has done a great service in giving the future generations a glimpse of what a beautiful and highly civilised land we all belong to.. his artful storytelling brings everything alive in front of the readers.. was so sad to see the story finish..
Read more
Report abuse

Vidyasagar DV
5.0 out of 5 stars Amazing
Reviewed in the United Kingdom on 7 October 2018
Verified Purchase
- started loving language more after reading this book
- excellent narration
- readers will be able to visualize all characters when they read
Read more
Report abuse

Avinash
5.0 out of 5 stars This Kindle version is top-class
Reviewed in the United Kingdom on 20 November 2017
Verified Purchase
What a wonderful writings in the 50's! Excellent
Read more
Report abuse