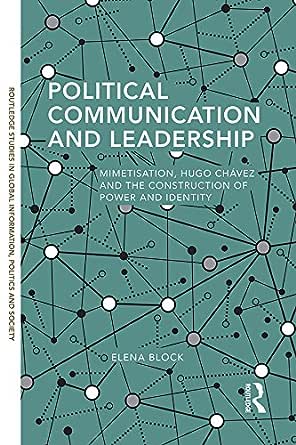 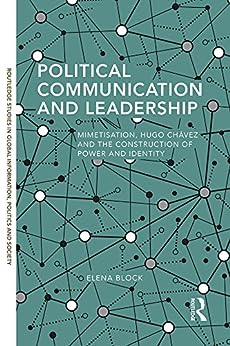 "In this important book, Elena Block traces the communication style of Hugo Chavez. Employing what she calls 'the logic of mimetisation', Block shows how Hugo Chavez used a complex set of cultural symbols, populist ideologies and practices and a unique style of communicational government to build a close bond with his constituents. A bond that led to the emergence of a collective identity called Chavez. This book will be of interest to anyone wishing to understand the nature and context of Venezuelan politics and political communication under Hugo Chavez." -Ralph Negrine, University of Sheffield, UK "This book tells us what is behind the popular - and populist - success of a leader like Hugo Chavez. It provides a fascinating in-depth investigation of the subtle, smart, and effective communication strategies that many populist leaders in Latin America, and perhaps in other contexts, employ to seduce millions of citizens. A timely book that helps to grasp a phenomenon like populism that in the age of sophisticated media technologies still thrives for most part on the 'old' factors of emotion, imaginary, identity." -Gianpietro Mazzoleni, University of Milan, Italy "This is a careful and considered book. Block offers a timely intervention in to debates around the relationship between media, politics, and culture. Her book adds richness not only to our understanding of the appeal of Chavez and the particular kind of leadership that he articulated but also to our understanding of wider, culturally different, processes of political communication."-The International Journal of Press/Politics --This text refers to an out of print or unavailable edition of this title.

Elena Block is Sessional Lecturer in Political Communication & Public Affairs at The University of Queensland's School of Political Science and International Studies, and tutor in Mass Media and Society and Mass Media, Spin and Public Opinion at The University of Queensland's School of Communication and Arts. Her main areas of interest are: political communication as a field and as a practice; the mediatisation of politics; populism; political culture; identity politics; communicational government; political leadership; social media and the development of pseudo-voice. --This text refers to an out of print or unavailable edition of this title.