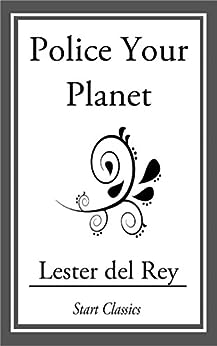 Lester del Rey (1915 - 1993) was an American science fiction author and editor. He was the author of many books in the juvenile Winston Science Fiction series and the editor at Del Rey Books, the fantasy and science fiction imprint of Ballantine Books, along with his fourth wife Judy-Lynn del Rey. Del Rey first started publishing stories in pulp magazines in the late 1930s, at the dawn of the so-called Golden Age of Science Fiction. He was associated with the most prestigious science fiction magazine of the era, Astounding Science Fiction, from the time its editor John W. Campbell published his first short story in the April 1938 issue: "The Faithful", already under the name Lester del Rey. The December 1938 issue featured his story "Helen O'Loy" which was selected for the prestigious anthology The Science Fiction Hall of Fame. By the end of 1939 he had also placed stories in Weird Tales and Unknown, which featured more horror and more fantasy respectively. In the 1950s, del Rey was one of the main authors writing science fiction for adolescents. During this time some of his fiction was published under the name "Erik van Lhin". --This text refers to an alternate kindle_edition edition.

3.8 out of 5 stars
3.8 out of 5
25 global ratings
How are ratings calculated?
To calculate the overall star rating and percentage breakdown by star, we don’t use a simple average. Instead, our system considers things like how recent a review is and if the reviewer bought the item on Amazon. It also analyses reviews to verify trustworthiness.

Walter Stanley
4.0 out of 5 stars Good Portrayal of A Grim Frontier Planet
Reviewed in the United States on 17 October 2015
Verified Purchase
I was slightly confused by the fact that this was advertised as a book by Lester Del Rey, though the title page said that the author and copywriter was Eric Van Lhin. Perhaps Del Rey was a penname? Or was this a mistake? The story was well-written, and presented a fairly realistic view of a rough and lawless frontier settlement on Mars: “It wasn’t a pretty view that visitors got as they first reached Mars. But nobody except the romantic fools ever thought frontiers were pretty.” Actually, frontiers are beautiful, but the settlements are ugly, both visually and morally. Ex-cop Gordon is exiled with a one-way ticket to this frontier as punishment for excessive honesty. Though he often winds up on the wrong side of the “law,” though that has little meaning in a lawless society, his honesty eventually comes through and he cleans up the planet. Naturally, he blunders into true love along the way.
Read more
Report abuse

Mike
4.0 out of 5 stars Good 1950s Sci-Fi - Gangster style
Reviewed in the United States on 8 May 2012
Verified Purchase
This 1950s sci-fi adventure story has been a favorite of mine for many years. I am not sure what it is about the 1950s era sci-fi that I like so much. Much of it, as is Police Your Planet, is light on the science and most of it is geared more to the juvenile (now more commonly called young adult) market but I have enjoyed most which I have read. The setting is Mars but much of the story could just as easily have been 1920's Chicago with a few modifications to the setting and technology. It is the story of Bruce Gordon, ex-fighter, ex-cop, ex-gambler, ex-reporter and ex-earth resident, who is deported to Mars with a one-way ticket, a few credits, a knife and a pack of reader (marked) cards. This is all that Bruce needs to survive in a Mars which is reminiscent of 1920s Chicago where the government and the gangs are competing to be the most corrupt but mostly in cahoots to get rich. Mars is ready to collapse under its own corruption. The only savior in sight is the mysterious near-omnipotent Security who secretly recruited Bruce prior to his deportation. Bruce is confronted with many opportunities to either make money or save Mars. It is a light, fun and fast read to follow Bruce on his Mars adventure.

This story is copyrighted in 1956. However, original publication date was 1953 as four parts in the periodical Science Fiction Adventures (reference: The Internet Speculative Fiction Database). Much of this story's science fiction is characteristic of this time period with focus on rockets, radios and newspapers. Sexual references are muted as is typical of the times - I would guess that this is particularly the case for a work that was first published piecemeal in sci-fi magazines. This is part of the charm and historic sci-fi insight that comes from reading a classic.

Police Your Planet is 1,851 Kindle locations long (more of a novella than a novel). Standard length novels seem to run in the 4,500 to 7,000 plus Kindle location range. For example, books in Jack Campbell's first Lost Fleet series were approximately 5,000 Kindle locations.
Read more
One person found this helpful
Report abuse

Elliot
4.0 out of 5 stars A Hard-Boiled Cop... on Mars
Reviewed in the United States on 21 June 2011
Verified Purchase
Although Lester del Rey was one of the leading editors in the history of science fiction, and a good SF author in his own right, this book falls more into the hard-boiled detective genre than science fiction, even if it is set on Mars. The hero is an ex-cop, ex-prize fighter, ex-investigative reporter who is exiled to Mars by earth authorities for digging into sensitive stories. He becomes a policeman on Mars and discovers that Mars is a hotbed of police and governmental corruption. The book is full of fights, all fought with pistols, fists and clubs, not rayguns. There is some science fictional content in the background, involving earth's tangled relationships with its planetary colonies, but the foreground reminded me far more of Dashiell Hammett's "Red Harvest" than of conventional science fiction; del Rey seems to have been interested in protesting the extreme police corruption found in many American cities in the 1950s, and using a science fiction background as cover. Nonetheless, this is a fast, exciting read, even if not a true SF classic.
Read more
2 people found this helpful
Report abuse

Geoffrey F. Arnold
4.0 out of 5 stars The Dame's tryin' ta kill me....
Reviewed in the United States on 8 October 2015
Verified Purchase
A short story more than not. The whole premise seems to be other than what is implied, and yet you enjoy the ride. Our protagonist seems to have been exiled to Mars, a somewhat less than safe place. And for a cop, it is downright difficult, unless you're on the right side. However, our hero is not really on either side, except where it concerns his getting enough money to get off Mars and back home to Earth.

Then there's the girl. There's always a girl. But remember the times in which stories like this were written. So, yeah, the girl has to be there, and she seems to want to kill our hero. There's always a hitch!

If you like Del Rey, you'll like this one, too.
Read more
One person found this helpful
Report abuse

Carla
3.0 out of 5 stars Police your planet
Reviewed in the United States on 26 March 2021
Verified Purchase
Not one of his best works. The story line and writing style seemed rough and with gaps. While his writing style always has a fast moving plot this story feels like it was rushed out to turn in something to meet a deadline.
Read more
Report abuse
See all reviews
Back to top
Get to Know Us
Make Money with Us
Let Us Help You
And don't forget:
© 1996-2021, Amazon.com, Inc. or its affiliates