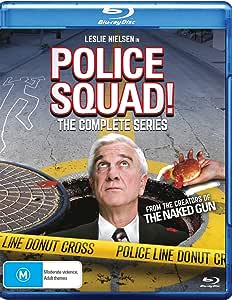 There are 8 million stories in the Naked City. Here are six. Join Detective Frank Drebin (Leslie Nielsen) and Capt. Ed Hocken (Alan North) as they solve the toughest cases - full of all the sight-gags, puns, and nonsequiturs that made the series famous! Created by David Zucker, Jerry Zucker and Jim Abrahams, who gave us other classics such as Flying High! and The Naked Gun series. Be an eye-witness to all the comedic action for the first time in stunning High Definition.

4.8 out of 5 stars
4.8 out of 5
1,504 global ratings
How are ratings calculated?
To calculate the overall star rating and percentage breakdown by star, we don’t use a simple average. Instead, our system considers things like how recent a review is and if the reviewer bought the item on Amazon. It also analyses reviews to verify trustworthiness.

john roberts
5.0 out of 5 stars Very clever, funny and ironic.
Reviewed in Australia on 14 November 2020
Verified Purchase
Anyone who enjoyed "Airplane/Flying High" or the "Naked Gun" movies will like these.
Read more
Helpful
Report abuse
See all reviews

L. Tait
5.0 out of 5 stars 'Cigarette? Yes, I know.'
Reviewed in the United Kingdom on 9 February 2019
Verified Purchase
I remember when this series was originally broadcast in the 1980s if memory serves. It follows the fortunes of Frank Drebin (played by the late Leslie 'The Poseidon Adventure' Neilsen), and all of the bizarre cases he has to solve in his job as a detective. It only ran for six episodes, the reason for this, according to rumours, was that nobody understood the comedy! A bizarre observation, considering that there's something for everyone, ranging from visual jokes, to clever verbal wordplay. And, every week, the guest star expected to appear in the episode gets picked off in the opening credits by some unfortunate (but very funny!) event or mishap. Add some core characters, from the somewhat unscrupulous scientist, to the shoeshine guy who has a disturbingly encyclopedic knowledge of absolutely everything, and you've got yourself a show! There are some running gags, as you'd expect, but my favourite one is possibly down to budget cuts in the production department, where, at the end of every episode, there's an improvised freeze frame, and the actors have to stay still, amid chaos, from a monkey running wild in the office, to the pouring of a cup of coffee! It's generally good old fashioned fun, and guaranteed to make you laugh!
Read more
12 people found this helpful
Report abuse

Asio flammeus
4.0 out of 5 stars On the spot!!
Reviewed in the United Kingdom on 5 February 2020
Verified Purchase
This short collection of six episodes, each lasting around 20 minutes, casts Leslie Nielsen in high comedic mode. The humour is bizarre but unique and were it not for rather too much firing off with revolvers I should give the production five stars.

Nielsen was a versatile actor with a fair sense of the ridiculous, but he could play serious roles (to a point). He appeared along with Peter Falk in two Columbo films. (They would have made a good cop-pair!) He has a major role in "Lady in Waiting" starring with the delicious Susan Clark as his fiancé and the no-good murderer.

Incidentally, to complain that such films are "dated" is a contradiction. If a production is true to its time then it is bound to be dated, and that is to its credit – surely?

Martin
5.0 out of 5 stars Gone before its time, much like its leading Man...
Reviewed in the United Kingdom on 16 July 2020
Verified Purchase
I got introduced to "Police Squad!" years ago after watching all three Naked Gun films featuring the continuing misadventures of Frank Drebbin (played by the late Leslie Neilson). This was available thanks to one viewer, in its entirety on YouTube, and could not figure for the life of me, why This show was canceled.

Enjoyable with the idea that it forces you to watch it to see the jokes rather than rely on a laugh track.. Amazingly i dont think that if we never had "Police Squad!" we would not have the greats like "Scrubs" and "Brooklyn Nine-Nine". Enjoy six stories from the city filled with 8 million of them and enjoy the spoof tv series that should never be forgotten.
Read more
3 people found this helpful
Report abuse

John Malcolm
5.0 out of 5 stars Good jokes, deadpan acting, and silly stories. What's not to like?
Reviewed in the United Kingdom on 29 May 2020
Verified Purchase
So many jokes, some of them very subtle in the background, so you can't take your eyes off all of the screen just in case. Some of them, probably like the Japanese garden joke, wouldn't be used today, but if it's funny...

The Blu-ray looks great, and even the surround mix works nicely.

Sidney Lotterby
5.0 out of 5 stars Top drawer short-episode comedy
Reviewed in the United Kingdom on 30 November 2017
Verified Purchase
One of the BEST short comedies ever made!!! Right up there with the greats like Fawlty Towers and Blackadder. This is the team which made the Airplane! movies, but has the genius stroke of being set as a 70s cop show filmed in 70s cop show style. Only Inspector Clouseau has been a funnier cop, and Police Squad! has a far higher joke density. Only bad thing is that it only has six episodes - it could have run for HUNDREDS! Why did they stop? Because they used the formula to make the 'Naked Gun' movies instead! Perhaps this should be subtitled 'Drebin Begins'!
SIX stars!
Read more
6 people found this helpful
Report abuse
See all reviews
Get FREE delivery with Amazon Prime
Prime members enjoy FREE Delivery and exclusive access to movies, TV shows, music, Kindle e-books, Twitch Prime, and more.
> Get Started
Back to top
Get to Know Us
Make Money with Us
Let Us Help You
And don't forget:
© 1996-2020, Amazon.com, Inc. or its affiliates