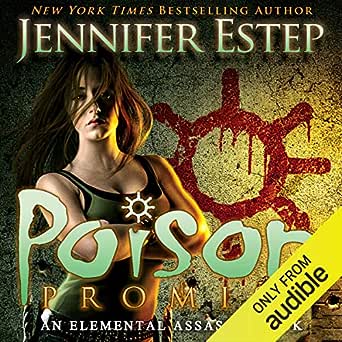 Nat
5.0 out of 5 stars I love the strong female heroine
11 January 2015
Format: Kindle EditionVerified Purchase
As always a fabulous read.

I love the strong female heroine. All aspects of the book make it interesting - wish the next one was already available :)

Sandy S.
TOP 500 REVIEWER
5.0 out of 5 stars 4.5 stars-go to UF series
23 July 2014
Format: Kindle Edition
: 4.5 stars--POISON PROMISE is the eleventh instalment in Jennifer Estep’s paranormal/urban fantasy Elemental Assassin series focusing on assassin Gin Blanco-aka The Spider. Gin is tired of the numerous attempts on her life; the killings; and the threats against her friends and family-but a new drug dealer in town has set his sights on Gin’s sister Bria and Gin is in no mood to stand by and watch the fall out from a new designer drug taking down most of Ashland and Southtown’s addicts and users.

Told from first person POV (Gin) the premise follows Gin as she, once again, must step in and stop a menace that is known as Beauregard Benson-a vampire with a special ability that leaves his victims a shell of their former selves. As the latest drug king pin, Benson likes to make his presence known, and in this, most of the people (humans, vampires, giants, dwarves and elementals) keep their distance lest they too, become a casualty of Benson’s secret powers. As Gin focuses on taking Benson down, she will become a victim of Benson’s tyrannical need to control the town of Ashland.

The secondary characters include all of the people and supernaturals close to Gin –Owen (Gin’s lover); Finn (Gin’s adopted foster brother and BFF); Jo Jo and Sophia (Dwarves); Bria (Ashland cop and Gin’s irritating sister) as well as Phillip, Eva, Roslyn, Xavier and more. The reader will be introduced to a soon-to-be new member of Gin’s team-a vampire and former nemesis whose motives are questionable until the truth is revealed. Gin’s past will come back with a vengeance – a second generation of supernaturals hoping for a piece of The Spider-and in this the next storyline is about to unfold-Black Widow (Elemental Assassin #12).

Jennifer Estep continues to pull the reader into a graphically violent, addicting and detailed series about a reluctant and complicated female assassin who wants nothing more than to spend her days working at the Pork Pit and her nights in the arms of her lover. Jennifer keeps the reader engaged with flashbacks, memories and recounting of previous storyline scenarios that further draw the reader into a series where The Spider will always come out on top but getting there is dangerous and messy.

POISON PROMISE is the build up to, and introduces the next ARC in Jennifer Estep’s intense and compelling Elemental Assassin series. Gin may have thought that taking down Mab Monroe ended that chapter in her life-think again-someone even more dangerous has taken up residence in Ashland and considers The Spider and everyone she knows- fair game in a war of power and control. No one will be safe with the new dealer in town.

If you are a fan of urban fantasy storylines with a kick-a$$ heroine who knows a thing or two about pain and suffering then Jennifer Estep’s Elemental Assassin series and POISON PROMISE should be your go-to series when the UF cravings take hold.

Read more
Helpful
Comment Report abuse
See all 2 customer reviews
Write a customer review
Get FREE delivery with Amazon Prime
Prime members enjoy FREE Delivery and exclusive access to movies, TV shows, music, Kindle e-books, Twitch Prime, and more.
> Get Started
Back to top
Get to Know Us
Make Money with Us
Let Us Help You
And don't forget:
© 1996-2020, Amazon.com, Inc. or its affiliates