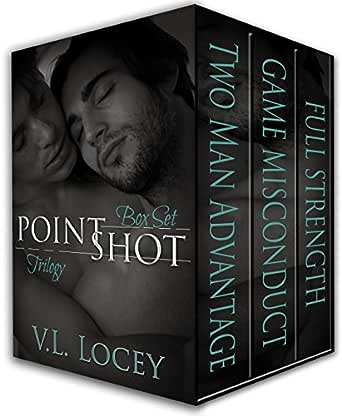 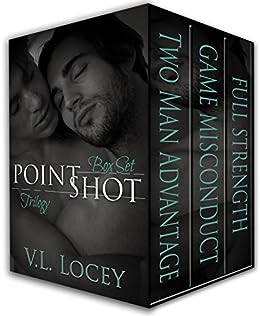 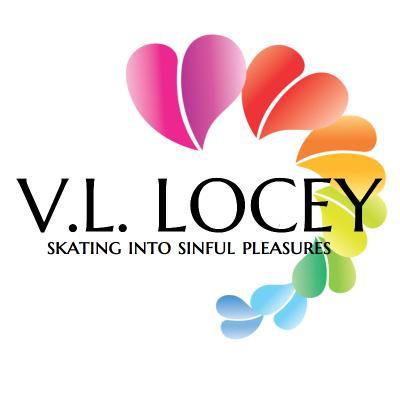 Kindle Customer
TOP 1000 REVIEWER
5.0 out of 5 stars Point shot trioligy
Reviewed in Australia on 7 September 2017
Verified Purchase
I loved these books.
Great characters, it was easy to believe their 'story'.
It moved along at a fast pace. I especially enjoyed the more graphic fight scene's as the main characters ended up as bloodied as the others.
I can't wait to read more from this author
Read more
Helpful
Comment Report abuse

Kindle Customer
4.0 out of 5 stars Unexpected
Reviewed in Australia on 11 November 2017
Verified Purchase
I really enjoyed reading this trilogy, and would recommend it. The characters were strong and interesting and diverse. The plot was intriguing although i did feel like there were some holes in it, it felt like the author was trying to rush it, but apart from that i liked it.
Read more
Helpful
Comment Report abuse

Boudicca
5.0 out of 5 stars Loved it!
Reviewed in Australia on 4 October 2017
Verified Purchase
Absolutely loved it. Funny to the point of hilarious at times, and touching, too. Can't recall a dull moment. A highly recommended read.
Read more
Helpful
Comment Report abuse

Veronica
TOP 500 REVIEWER
4.0 out of 5 stars Loved it
Reviewed in Australia on 3 March 2017
I received a free copy of this book to read and review for Wicked Reads.

Hockey star Vic has a big mouth with no filter and his team has had enough. In an effort to teach him how to behave, he is sent back to play with their AHL team. Vic is instantly attracted to his new team mate Dan Aroux, so when the two share a room on a road trip they quickly fall into bed together.

These two together are absolute dynamite. We get to see them spend a good amount of time between the sheets throughout all three books which was always fun and never got old. Every scene was just as sexy as the last.

I would usually find a guys like Vic annoying and some of the time he is. Vic referring to Dan as a hobbit got old fast and was a turn off. It was easy to see Vic's mummy issues were causing him to lash out and were the driver of his poor behaviour. He really is his own worst enemy. Over time though Vic opens up to the people around him and by the start of Full Strength I loved him. Dan on the other hand is a great guy, well liked by everyone, takes care of the people in his life and he is pretty patient with Vic even when Vic doesn't deserve it.

Each story is told entirely from Vic's point of view and the musings that go on in Vic's head had me laughing at times and cringing at others. I also have Vic to thank for spending a day with the theme from Laverne & Shirley stuck in my head.

The three stories in this box set, Two Man Advantage, Game Misconduct and Full Strength, were all solid 4 star reads for me. The story of Vic and Dan's lives and relationship spans the entire box set, taking us though lots of ups and downs in their personal and professional lives. I was fully engaged with this story, from the first page right to the last.

The Points Shot Trilogy for me got the balance of romance/relationship and sports story spot on. I'm definitely going to be checking out more of Ms Locey's work.

Lulu
5.0 out of 5 stars Excellent
Reviewed in the United Kingdom on 11 January 2018
Verified Purchase
“You’re making my feels all warmy,”

I absolutely LOVED this trilogy! Laugh out loud funny from the word go. I know a few have rated this book down due to the brash nature of one of the MCs Victor, but I just loved him. His one liners were absolutely hilarious and his ability to have me laughing out loud one minute and gasping ‘awww’ the next is commendable. To show a bit more of Victor’s loving side I’ve added some loving quotes to this review.

‘I had come here with nothing but a bad rep and a short fuse, which I still had, but now I had someone who cared whether I stayed or left.’

So this is the three book trilogy and is the story of Victor and Dan. Victor is a professional hockey player and his smart mouth has got him in trouble for a final time. He’s sent down to the minors and the Cayuga Cougars as punishment and to sort his attitude out. Victor has long defined himself as bisexual but isn’t openly out to the league. Whilst in Cayuga he is inexplicably drawn to his teammate Dan. Right from the word go he sees something in Dan he can’t get away from. But with his horrendous childhood and abusive past lingering in the background he struggles to accept his growing feelings for him.

I tugged Dan out onto the floor. People parted like the Red Sea. I took Dan’s right hand in my left and slid my hand around his side until it rested on his lower back. “Who leads?” he asked. “I do for now—you do for the rest of our lives.”

I really don’t want to spoil this story. So I won’t. I adored these two. Dan is one of my favourite MCs of all time. He’s sweet but strong. He knows just how to handle prickly Victor but certainly DOES NOT let him walk all over him either. He’s feisty, loving and awesome, I just loved him. The two of them together are brilliant, they just fit. Their love is real. It’s hard work, they make mistakes but they work through them together.

‘I claimed his mouth. He took my heart.’

Secondary characters in this book are AWESOOMMEEEEE. They’re so well developed and really make this series for me. I loved pretty much all of the hockey players, Dan’s family, Heather and all the other wonderful people involved in this trilogy.

“Dan, just looking at you across a crowded room eases me.”

If you really can’t stomach foul mouthed hockey players this really might not be the book for you but I implore you to give it a chance because it’s so so so much more than that!
Read more
One person found this helpful
Report abuse

Kirk
5.0 out of 5 stars Vic and Dan forever!
Reviewed in the United Kingdom on 21 March 2018
Verified Purchase
I came across this trilogy quite by accident, but thought I'd give it a try as I love a hockey romance. What I wasn't prepared for was to be so utterly blown away by it. I just want to gush about it for as long as you'll let me as it was so good. I'm absolutely awestruck by the authors words with the way she wrote Victor Kalinski's character, to portray this guy as being so abrasive but on the flip-side, makes him one of the most real and lovable characters I've ever read about takes some kind of talent. He's brash, inappropriate and so mouthy and seemingly doesn't care about anything but himself. He's also, hands down, the funniest guy ever; I honestly laughed out loud at quite a few of Victors diatribes and this is something I hardly ever do. He was hilarious and I wish I had a tenth of his verbal skills, the guy is a master at the perfect take-down.

Don't get me started on Dan Arou, I think I'm as besotted as Vic is and I'm totally head over heels gone for him. I'll not put any spoilers in and I'll not repeat the blurb, but you need these books in your life like yesterday if you like a smart, punchy, honest, extremely well written and white hot romance set in the hockey world. It's seriously a no-brainer.
Read more
Report abuse

Cadiva
4.0 out of 5 stars Hilariously witty and starring a serious jerk you just have to love
Reviewed in the United Kingdom on 15 October 2017
Verified Purchase
Victor Kalinski is an absolute arse and he makes no apologies about it but Vicki Locey has such a deft hand at creating characters that you can't help but love that he transcends his status.

This box set is an excellent way to get the full Victor experience as he fails his way through the hockey leagues to end up back with the reserve guys after repeated infractions both on and off the ice.

He's a misogynistic, belligerent, abrasive guy who's life has been nothing but hardship as he dealt with an alcoholic and abusive mother. It explains his behaviour but it's never an excuse and it gets him into trouble again and again.

Dan, on the other hand, is the perfect foil and his acceptance and love goes a long way to showing Vic things can be different.

I loved the B plot with Heather and it was a lovely surprise for her not to be a bitch and instead to slot nicely intro the wider family.
Read more
Report abuse