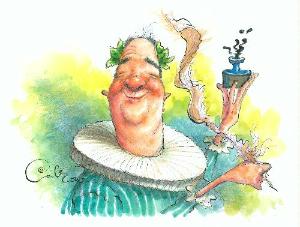 Poems I Wrote When No One Was Looking Hardcover – Illustrated, 1 November 2011

by Alan Katz (Author), Edward Koren (Illustrator)
5.0 out of 5 stars 3 ratings
See all formats and editions
Sorry, there was a problem loading this page. Try again.

"I laughed out loud when I read the poems in this book, as did my students! B&W line drawings add to the humor and make the poems appealing to older students. Quite a few of the poems include mild bathroom humor, just the right type to appeal to upper elementary and middle school students."
--Library Media Connection, Jan/Feb 2012, Recommended

"As they did in Oops!, Katz and Koren once again craft a giggle-inducing collection of 100 humorous poems. . . . This collection should prove popular with readers who’ve enjoyed the work of Shel Silverstein, Jack Prelutsky, and Douglas Florian."
--School Library Journal, November 2011

"The succinct verses derive humor from puns, family dynamics, and bathroom humor as well as a generous sprinkling of general silliness. This is solid ground for amusing grade-school poetry, as demonstrated by the likes of Jack Prelutsky and Douglas Florian."
--BCCB, December 2011

Alan Katz has been a print and television comedy writer for more than twenty years. In addition to being a multiple Emmy nominee for his work on The Rosie O’Donnell Show and Disney’s Raw Toonage, he has written for children’s programming on Nickelodeon, ABC Television, Warner Bros. Animation’s Taz-Mania, and many others. Alan is the author of several adult humor books, humorous essays for The New York Times and other publications, and books for young readers. Alan lives in Weston, Connecticut, with his journalist wife, Rose, and their children Simone, Andrew, Nathan, and David. Visit him online at AlanKatzBooks.com.

Edward Koren may be best known for his work in the New Yorker magazine, where he has published nearly one thousand cartoons. He has written and illustrated several children's books, including Very Hairy Harry. He taught at Brown University and received a Guggenheim Fellowship. He lives with his family in Vermont.
Start reading Poems I Wrote When No One Was Looking on your Kindle in under a minute.

S. WIRTH
5.0 out of 5 stars Great Book
Reviewed in the United States on 22 November 2013
Verified Purchase
I have a grandson who is 9 and he loves Alan Katz books. When I am lucky enough to have he and his brother with me in the car he reads these to all of us and we just get silly and laugh. This book and the others I keep in the car are the first thing he looks for.....even before he asks if I have an iPad in the car! The best part is when after we listen to a few we start making up our own poems, one line from me then a line from him and on and on. The best time is when I have 3 grands of all ages and we play this same game for miles and miles. Please try any of his books you will LOVE them!
Read more
2 people found this helpful
Report abuse
See all reviews
Back to top
Get to Know Us
Make Money with Us
Let Us Help You
And don't forget:
© 1996-2021, Amazon.com, Inc. or its affiliates