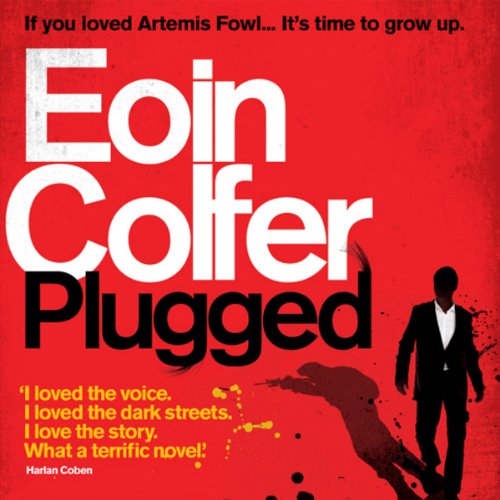 Once I have hair I'll be happy.' At least that's what Irish ex-army Sergeant Daniel McEvoy tells himself. As a doorman at a seedy New Jersey casino, dealing with unpleasant customers, a neighbour and a receding hairline are all part of Dan's daily grind. Then he has a particularly bad day. Not only does his one friend, dodgy doctor Zeb Kronski, mysteriously disappear, but Dan's sometime-girlfriend, casino hostess Connie, is found with a hole in her head.

Dan's a hard man with a soft centre and he's been framed for a crime he didn't commit. Drawn into a deadly chain of events where a cop-killing female cop becomes his only ally and he makes an enemy of ruthless drug-dealer Mike Madden, Dan discovers that his battle against baldness is the least of his worries.

Written with the warmth and wit that make Eoin Colfer's Artemis Fowl novels so irresistible, Plugged is a brilliant crime debut from an exceptionally good writer.

4.0 out of 5 stars
4 out of 5
118 global ratings
How are ratings calculated?
To calculate the overall star rating and percentage breakdown by star, we don’t use a simple average. Instead, our system considers things like how recent a review is and if the reviewer bought the item on Amazon. It also analyses reviews to verify trustworthiness.

karen murray
5.0 out of 5 stars an irsh ganster in new york
Reviewed in Australia on 18 November 2018
Verified Purchase
Dan McAvoy a security guard must find who murdered his friend whilst avoiding gansters drug dealers and his boss. dark and grimy this is Eoin Colfers first adult novel, full of shady new Yorkers all out to kill him. LOVED IT !!
Read more
Helpful
Report abuse

anon
5.0 out of 5 stars amazing book
Reviewed in Australia on 5 June 2014
Brilliant book, amazing character depth, and I would totally recommend this to anyone. Favourite book by far! I love it
Read more
Helpful
Report abuse
See all reviews

Iwan
3.0 out of 5 stars Disappointing
Reviewed in the United Kingdom on 3 March 2015
Verified Purchase
In my teenage years I loved the Artemis Fowl series, and I continued to keep up with each release until the series' climax in 2012. The books were easy to read, they seemed well researched and planned and never failed to make me laugh.

With that in mind I was extremely excited to read Colfer's foray into adult fiction and in all honesty I was quite disappointed with his resulting attempt. I completed the book in 2 days, more to finish it than out of actual curiosity.

The protagonist (Dan McEvoy) is quite likeable but his background story is a little unconvincing with new details introduced conveniently throughout the book, almost as an afterthought. In contrast to his Artemis Fowl series this book reads as if it was written without much planning, almost organically as Colfer imagined up his several plot lines, which intersect again in quite unconvincing ways. There's nothing worse in a work of fiction than when a protagonist's problems are all solved within a chapter or two, without much explanation and in unrealistic ways (those who read the book will understand!). The criminals (and actually even McEvoy) seem like unprofessional buffoons who owe most of their success to dumb luck or incompetent policing.

I've rated the book 3 stars as it was still mildly entertaining to read and I love Eoin Colfer as an author, I just wish that this book had more semblance to the style, clever plot ideas and comprehensiveness of the Artemis Fowl series.

Despite being disappointed with this book I will most likely read the sequel, just to see if it's an improvement on this effort! If you are looking for a reincarnation of the Artemis Fowl series, I don't think that you will find it here.
Read more
3 people found this helpful
Report abuse

MilkPearl
5.0 out of 5 stars An Adult book indeed...
Reviewed in the United Kingdom on 7 November 2011
Verified Purchase
Let me start off by saying I have a degree in English Lit and Creative Writing; therefore, I've read a lot of great books and spent most of my life writing stories.
The AF series couldn't be topped- even if it was a "children" series. The AF novels still remain some of the best books I have ever read. However, Plugged was far from disappointing. The character, Daniel, is solid and 3D. He jumps off the page, due to his flaws and likes. He can be pictured clearly in the mind's eye. I think Plugged would make a great movie because of this.
The other characters are also excellent. They are all well developed and I couldn't call any of them boring.
Like in AF, there are so many twists and loops that it keeps you guessing. Instead of magic, we have intelligence and guns. Colfer's humour is, as always, spot on. I took this book on holiday and read it in two sittings. I read it again recently and I gobbled it up once again.
For those of you who think this isn't an adult's book...would you let your children read about murder, sex, drugs and war? If so, I suggest you seek help.
Personally, I hope this gets a sequel. 5/5
Read more
Report abuse

Patrick Neylan
4.0 out of 5 stars Plugged in, light and dark
Reviewed in the United Kingdom on 18 September 2011
Vine Customer Review of Free Product( What's this? )Verified Purchase
I can't say whether this will please Colfer's fans because I haven't read his kids' books. Taken purely on its own merits, Plugged mixes humour and darkness in a way that will delight some readers and antagonise others. As a fan of Raymond Chandler, I loved it.

The plot is implausible, but that goes for most intricate thrillers. What's important is that Colfer allows the reader to suspend his disbelief as the body count rises and the plot twists carry the story in unexpected directions.

Much of the humour comes from the hero's unmistakably Irish take on events, so he stands slightly apart from the American setting and bridges the reader's own separation from the culture where it takes place. Dan's sensitivity over his hair loss is a running theme, and his obsession with that keeps him from becoming too immersed in the world of crime that tries to suck him in.

Colfer's style is light and easy, with plenty of witty banter to keep the story bright and making for an easy, but not trivial, read.
Read more
Report abuse

Strv 74
5.0 out of 5 stars Perfect for a slow day
Reviewed in the United Kingdom on 17 April 2012
Verified Purchase
I have not read Eoin Colfers other books. If I understand them correctly they are children books so to compare this one to them would be of limited interest.

"Plugged" is one of those books that are very easy to read. It does not demand anything from you. You just go with the flow. It is not complicated and for once there is no extreme terrorists or super villains involved, just ordinary crooks and ordinary citizens. With this Colfer has managed to create a very funny, interesting and rapid read that is perfect to relax with when you take a break from working on your CV or the next Nobel price. I hope he will continue with more books with Daniel McEvoy as the main character. I will definitely buy them.
Read more
Report abuse

pbj
4.0 out of 5 stars Very amusing a good quick read. Gritty writing and clever observations.
Reviewed in the United Kingdom on 22 May 2017
Verified Purchase
Ideal for holiday reading. Great believable characters , and the constantly changing unexpected outcomes make for a brilliant entertaining story.
Read more
Report abuse
See all reviews
Back to top
Get to Know Us
Make Money with Us
Let Us Help You
And don't forget:
© 1996-2021, Amazon.com, Inc. or its affiliates