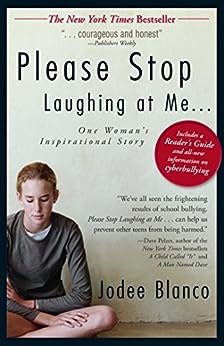 This book could save your child's life. It's a must-read for parents, educators, and everyone concerned... --John Bradshaw, author of the New York Times bestseller Homecoming --Review --This text refers to an alternate kindle_edition edition.

Survivor turned activist Jodee Blanco is the author of four books on bullying, including Bullied Kids Speak Out and the seminal New York Times bestseller Please Stop Laughing At Me, currently required reading in middle and high schools across the country. She travels to schools, sharing her story to save lives, and has spoken to over half a million people worldwide. CBS Evening News and USA TODAY have featured her story, and she has bylined for CNN.com and Huffington Post. --This text refers to an alternate kindle_edition edition.

4.4 out of 5 stars
4.4 out of 5
112 global ratings
How are ratings calculated?
To calculate the overall star rating and percentage breakdown by star, we don’t use a simple average. Instead, our system considers things like how recent a review is and if the reviewer bought the item on Amazon. It also analyses reviews to verify trustworthiness.

Fiona Margaret Barber
5.0 out of 5 stars A must-read for just about everyone - you bullies, as well as you "victims" - no you don't have to be a victim.
Reviewed in Australia on 6 February 2015
Verified Purchase
Jodee is an inspiration. She is able to present, in simple English, all of the confused thoughts and emotions of a recipient of bullying. She survived bullying on a mega scale. I cannot wait to read the sequel.
Read more
Helpful
Report abuse
See all reviews

honeybunny
2.0 out of 5 stars sensationalized account
Reviewed in the United Kingdom on 28 August 2011
Verified Purchase
Like other reviewers I want to start by saying that I abhor bullying and bullies.In my profession it is something I will not tolerate,and as a consequence I don't find bullying,on the whole, a problem.However,I appreciate that the British and American education system is very different and this book illustrates how vast those differences are.The relentless quest to be seen as 'cool' is part of the problem,as is the very strict hierarchies within the school system,the geeks, the jocks, the nerds and so on all vying for position.I find that really sad and a bit pathetic.This is not as paramount in our education system, with the geeks,nerds and cool kids seeming to get along quite well, we seem to more tolerant about different groups and individual differences in our society.Though I am of course aware that there are exceptions to this rule.I am only writing as I find.
This is not a well written book,for someone who clearly rates her intelligence and achievements I would have expected the writing to be so much better.The author goes to great pains to convince us and herself that her bullying started as a consequence of her kind and compassionate nature towards others.Reading between the lines I think she could have been bullied because of her superior and holier that thou demeanour,which was misguidedly fanned and fuelled by her parents.Not that I am saying she should have been bullied for having those personality traits,but you can't help but think her over sensitive and dramatic nature left her unable to cope with the usual taunts of childhood.I am not talking of the more severe forms of the author's bullying,but for the most part the incidences were relatively mild.Most of us have suffered the rejection and isolation of our peers but just got on with it.The author has a sense of entitlement that rendered her unable to cope with insults of her peers.I would love to have heard her peer's version of this abuse.It is very much a one sided account.
I downloaded this book when it was a freebie,no way would I pay this hefty price tag, especially as the author gives no practical help for victims of bullies,though she will run a paid workshop on aspects of bullying.All in all,an ok read but a little self absorbed and very subjective.

Amazon Customer
5.0 out of 5 stars We need to talk more honestly about bullying - Jodee's book is a good place to start
Reviewed in the United Kingdom on 17 September 2018
Verified Purchase
This is a deeply honest book about Jodee's experience of bullying throughout her teens and young life; it helped me contextualise how subtle and pervasive bullying is and just how hard we all (including me) find it to talk honestly about bullying. I've passed this book on to a teen who is currently trying to make sense of cruel bullying within her school - i think it may offer her some insight and i hope it helps her move into thriving.
Read more
Report abuse

Ly
3.0 out of 5 stars Interesting but no solutions
Reviewed in the United Kingdom on 21 August 2011
Verified Purchase
I was interested enough to read this book till the end ( without being distracted by other books) so it did hold my interest.

however I found it a bit one dimensional.
I think this may be for me because I am British and so found it hard to identify with USA school life.
I was struck by the difference of school life vs holiday life which was puzzling.

As a book about bullying I dont think it offered any solutions - perhaps thats the sequel? I think if I was a bullied schoolchild I would think, reading this, that I had to battle through, and find not much comfort.

I did like the way in the kindle text, people had highlighted several quotes that appealed to them
Read more
One person found this helpful
Report abuse

alex
5.0 out of 5 stars I wasn't bullied but I love this book, it's an eye opener for the whole huge part of our life.
Reviewed in the United Kingdom on 19 May 2014
Verified Purchase
I have no personal experience of bullying or being bullied, but this book is amazing. How our kids grow up is the most important thing in the world. I'm not a parent yet but hopefully one day will be and I am so glad I read this book. What an inspirational story and what an amazing strength!
Read more
Report abuse

jen
5.0 out of 5 stars Five Stars
Reviewed in the United Kingdom on 18 September 2014
Verified Purchase
Good read
Read more
Report abuse
See all reviews
Back to top
Get to Know Us
Make Money with Us
Let Us Help You
And don't forget:
© 1996-2021, Amazon.com, Inc. or its affiliates