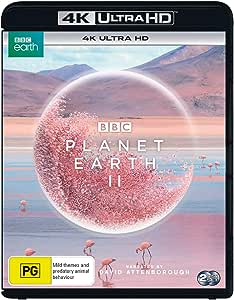 Planet Earth II is an immersive exploration of the jungles, mountains, deserts, islands, grasslands and cities of the world. Journey to the four corners of the globe to discover the extreme forces that shape life in each of these iconic landscapes and the remarkable ways animals manage to overcome the challenges of surviving in the wildest places on Earth. From eye-to-eye encounters with incredible creatures to epic journeys through breath-taking wildernesses, experience the wonder of the natural world as never before. EPISODES: Islands Mountains Jungles Deserts Grasslands Cities

4.8 out of 5 stars
4.8 out of 5
1,664 global ratings
How are ratings calculated?
To calculate the overall star rating and percentage breakdown by star, we don’t use a simple average. Instead, our system considers things like how recent a review is and if the reviewer bought the item on Amazon. It also analyses reviews to verify trustworthiness.

Russky100
5.0 out of 5 stars Truly staggering.. The pinicle of wildlife filming, cinematography and visual quality.
Reviewed in the United Kingdom on 24 August 2017
Verified Purchase
What can I say that hasn't already been said?
Planet Earth 2 is one of the most extraordinary and beautiful wildlife series ever produced. Plant Earth 2 was filmed in native UHD 4K... And boy does this series show it off in all it's glory. Believe me when I say nothing will prepare you for the utterly staggering and beguiling beauty you will see on the screen before you. It really is a sublime in every respect. .

Next is David Attenborugh's usual excellent narration which draws you into the magical world you are seeing on screen and at times feel you are actually living it. To aid this is a particularly beautiful and fitting soundtrack... As with all the planet series of wildlife documentaries, it is orchestral music of the highest order that will make you laugh at the comic antics of the wildlife, stare in awe or cower in terror and disbelief at what you are seeing... It really does put many Hollywood soundtracks to shame.

I won't bore you with more details as they have been said many times before, but I do emplore anyone in poession of the equipment capable of playing UHD 4K blu-ray to buy this highly regarded series without delay.... It really is a landmark production in every sense.

markd
4.0 out of 5 stars Another Attenborough classic
Reviewed in the United Kingdom on 1 April 2017
Verified Purchase
This series, aired in 2016 in the UK, is a follow up to the highly rated Planet Earth from 10 years ago .
The BBC has produced, unsurprisingly for an organisation with a £3.5 billion annual budget, a worthy sequel with this latest offering . The camerawork is outstanding and one can only sit in awe as the various scenes unfold before our eyes . Kudos to the cameramen who must have spent many hours, no doubt often very uncomfortably, studying their subjects and then patiently waiting to record the animals with a clarity that we have not often seen .
We get to see sloths, iguanas lions and a whole host of other animals engaging in various aspects of their daily lives and the commentary is superb . Sir David Attenborough is not just a national treasure here in the UK, but a world treasure and he explains the action that we are witnessing with his usual clarity, conciseness and dry humour .
The soundtrack is overly intrusive and often leads the viewer by signalling in advance when we are to see danger or humour etc. . The old adage of "less is more" should perhaps have been the guiding principle for the producers when commissioning the score . It would certainly be great if the viewer were able to lessen the volume of the soundtrack without lowering the commentary and natural sound effects that are on display .
Overall, this is an outstanding natural history series that makes a great addition to my library and I would heartily recommend it to others . I have not awarded the full 5 stars because of the soundtrack issues, which may seem a trifle churlish but reflects my honest opinion .
Read more
13 people found this helpful
Report abuse

Chase Porter
5.0 out of 5 stars Stunning picture and looks amazing in 4K HDR.
Reviewed in the United Kingdom on 5 June 2017
Verified Purchase
Fantastic programme and a definite show off piece if you own the right equipment. The picture quality on this is simply stunning and the 4K HDR has been done fantastically. If you own a 4K TV don't hesitate to pick this up.
The programme itself is extremely informative and was a pleasure to watch.
Read more
9 people found this helpful
Report abuse

Mr. I. Simpson
2.0 out of 5 stars 4k Ultra HD letdown
Reviewed in the United Kingdom on 2 December 2019
Verified Purchase
4k Picture looks like upscaled 1920x1080.If you want to test your new 4k TV go to YouTube instead. Or if you have Amazon prime have a look at the Grand tour in 4k which is really fantastic to test the colour and sharpness of 4k.I am not joking but this is a big let down for me when I was expecting pin sharp images that I am used to from YouTube. I have a new Samsung 65 inch Ultra HD 4k TV and a new Panasonic Ultra HD 4k player bought from Amazon less than 2 weeks ago. I am going to be very wary about buying 4k bluray discs in future as they are more expensive than there full HD counterparts.
Read more
2 people found this helpful
Report abuse

rickl
5.0 out of 5 stars Just the best.
Reviewed in the United Kingdom on 26 September 2017
Verified Purchase
What can you say about Planet Earth only that it justifies the entire BBC budget. Every school should have a class for primary school kids where they sit them in front of this. No test at the end, just to awe them a bit about the world we live in and inspire them to grow up not to be craven idiots who wreck it for a few quid. 4K sensational.
Read more
7 people found this helpful
Report abuse
See all reviews
Get FREE delivery with Amazon Prime
Prime members enjoy FREE Delivery and exclusive access to movies, TV shows, music, Kindle e-books, Twitch Prime, and more.
> Get Started
Back to top
Get to Know Us
Make Money with Us
Let Us Help You
And don't forget:
© 1996-2020, Amazon.com, Inc. or its affiliates