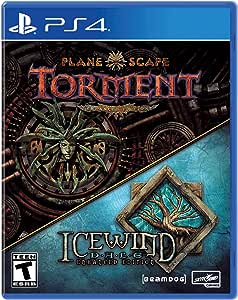 by Skybound Games
Platform : PlayStation 4
4.6 out of 5 stars 36 ratings
In stock.
US imports may differ from local products. Additional terms apply. Learn More.

Ships from and sold by Amazon US.

Planescape Torment
“What can change the nature of a man?”

You are the Nameless One, a hulking figure covered in scars and tattoos collected over the course of countless lives—none of which you can remember, but are now coming back to haunt you. You are prodded awake by Morte, a floating skull and keeper of secrets, to embark on an adventure from the dirty streets of Sigil through the mysterious Outer Planes and even into the depths of Hell itself.

Soon, you will discover that some destinies cannot be escaped… and some memories are greater burdens than an even an immortal can bear.

THE PLANES AWAIT
Explore the furthest and most bizarre reaches of the Dungeons & Dragons multiverse, filled with strange magics, talking weapons, philosophic undead, and more.

STRANGE BEDFELLOWS
A chaste succubus who can kill with a kiss. A confused crossbow-wielding cube. A suit of armor animated by a spirit demanding justice. Join these companions and more on your journey through the planes.


Icewind Dale
Evil stirs beneath the Spine of the World.

Journey deep into Icewind Dale, a harsh and unforgiving territory settled only by the hardiest folk. Battle the cunning, ferocious beasts that survive among the snow-shrouded peaks, and confront an evil that schemes to wreak destruction upon the world.

NEW CHARACTER OPTIONS
Select from over 30 new kits and classes to create the perfect adventuring party; customize your heroes with expanded options for hair, skin, and clothing colors, as well as new portraits and voice sets.

GATHER YOUR PARTY
Tackle the dangers of Icewind Dale alone or withfriends in co-op multiplayer.

I am so thrilled these games have reemerged as I played them when they first came out back in 1999 and 2000 and I still have them. I will say it’s a “memory lane” blast playing these again and my jaw hit the floor when I noticed these games were available for pre-order last week as I didn’t get the memo they were coming out, but after my “no way, this is not possible” moment, and pulling my jaw off the floor, I instantly ordered these, as well as the Icewind package and Neverwinter Nights too.
I played the d&d book and dungeon games a little as a kid and have been hooked on the pc d&d games since Pool of Radiance from 1988, which I still have. Actually I guess I could be called a “collector” as I still have all of my old pc games, so buying this rerelease that transitions to the PS4 was a ”no brainer” for me. I must admit I was still a little shocked that I was holding these rereleased games in my hands when they arrived on the 15th – and luckily I only had to wait on pre-order for six days as I never knew these games were being rereleased and transitioning to the PS4.
I’m a BIG memory lane person and this “blast from the past” is a HUGE hit with me, so buying these was a must have moment for me. Looks like I’m the second review of these games, where I’ll leave the same game review for both packages. Also, I agree with the first reviewer completely in the differences between these games, and I will add that I’m really looking forward to Neverwinter coming out in December. I will add that I truly hope more of the d&d pc games make their way over to the PS4 as I would love for the Dark Sun series and Icewind II, as well as others, also come to the PS4.
Here’s what’s so cool about all of this. First, I find these games to be super fun and super addictive and I really enjoy playing them. Second, when these games came out back in 1999-2000 it was, if my memory is correct, a DX4-100 or a Pentium 100 pc chip if you were lucky on a 15 inch monitor; so replaying these games on a PS4 with a large 4k wide-screen tv is mind-blowing and super cool.
These games were all HUGE when they first came out and are all still highly revered today, some 20 years later, which shows how GREAT they were back then. In my opinion, those of us that played these “back in the day,” purchasing these rereleases and converts to the PS4 is a “no brainer” and a “must have” and I have already purchased the pre-releases and hope many more follow as I’ll be buying those too. For the new players of these classic games, I could easily say “go for it” and buy these as they are already priced as a “Greatest Hits” and “All DLC included,” so the price is right and the games are classics and an absolute blast playing.

RL
3.0 out of 5 stars Love it when it works
Reviewed in the United States on 17 October 2019
Platform: PlayStation 4Verified Purchase
Edit to update for playing Icewind Dale.This is fantastic. I was concerned how they would adapt the keyboard to a PS4 controller but they did an excellent job. If you’re looking for HD graphics of a new era, you’ll be upset. If you’re looking to play the game of your youth or if you want to try a game you’ve heard us 35+ year olds talking about, this is it.

Update moved to three stars. Lots of locking up trying to nuke out Pharod.

Icewind Dale and Icewind Dale Heart of Winter- these are more combat based than Torment. It’s not a good thing or a bad thing, it’s just a thing to remember when you play it. Now, fair warning, there are two items that Eidon can upgrade. The game locks up during this and Beamdog has no plans to fix it.

I had a few lock up errors with IWD and HoW, but not nearly as many as Torment. With Torment I was guaranteed at least one per play session. With IWD I had five or six total, and none before my Heart of Fury play through. I decided to go for all of the achievements and there were times during a difficult battle in Heart of Fury that I’d be winning after getting smashed 10 times and it would lock up. That’s enough to make you want to rage quit.

All in all I’d play through it again but it’s frustrating that Beamdog doesn’t give any press to broken quests, or have a plan to fix it. The broken quest items don’t affect your ability to get all of the achievements though, so there’s that.

It takes several play throughs to get the achievements. It also takes several to get your character to level 30 in three classes.

awmm8
5.0 out of 5 stars Perfect
Reviewed in the United States on 9 January 2020
Platform: PlayStation 4Verified Purchase
It’s hard to believe how well Icewind Dale, Torment, and Baldur’s Gate translated from PC to console, but here we are. Absolutely recommended. Just don’t go into it expecting great graphics, of course. They aren’t bad by any means, but they are from the late-90s. But if you’re playing these games in the 20’s, presumably you’re not expecting much in that regard. (The cut scenes for Icewind Dale are awful though, and the audio/video is wildly out of sync.)
Read more
3 people found this helpful
Helpful
Sending feedback...
Thank you for your feedback.
Sorry, we failed to record your vote. Please try again
Report abuse

John M. Burkhart
5.0 out of 5 stars Just buy this. You will not be disappointed.
Reviewed in the United States on 6 January 2020
Platform: PlayStation 4Verified Purchase
Wow what a product. Recommend to anyone. Easy to understand.
Read more
One person found this helpful
Helpful
Sending feedback...
Thank you for your feedback.
Sorry, we failed to record your vote. Please try again
Report abuse

Joseph Peavey
4.0 out of 5 stars Classic game.
Reviewed in the United States on 29 February 2020
Platform: PlayStation 4Verified Purchase
This is a really fun game. It takes some getting used to the ps4 controller for this game but we'll worth it.
Read more
Helpful
Sending feedback...
Thank you for your feedback.
Sorry, we failed to record your vote. Please try again
Report abuse
Load more international reviews

Amazon Customer
5.0 out of 5 stars Would purchase again in a heartbeat
Reviewed in the United States on 22 December 2019
Platform: PlayStation 4Verified Purchase
Loved this version of two classic games. Definitely worth the cost.
Read more
One person found this helpful
Helpful
Sending feedback...
Thank you for your feedback.
Sorry, we failed to record your vote. Please try again
Report abuse

Peter A Jordan
3.0 out of 5 stars Bugs
Reviewed in the United States on 20 February 2020
Platform: PlayStation 4Verified Purchase
Great games, but buggy as heck
Read more
Helpful
Sending feedback...
Thank you for your feedback.
Sorry, we failed to record your vote. Please try again
Report abuse