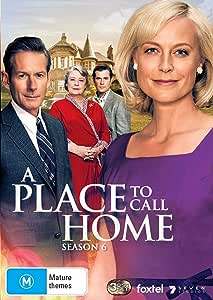 Resilient nurse Sarah Nordmann (Marta Dusseldorp) finally marries wealthy landowner George Bligh (Brett Climo). But as Sarah takes her place as lady of Ash Park, George's mother, Elizabeth (Noni Hazlehurst), feels pushed out of the household that she ran for decades. George's son, James (David Berry), returns from abroad to start a business in Sydney, while his daughter, Anna (Abby Earl), lives in Hawaii with her sister-in-law (Arianwen Parkes-Lockwood), hiding a secret from the rest of the family. As the Bligh's journey back to each other, they face tragedies, betrayals and new beginnings that will challenge their relationships and change the courses of their lives.

4.8 out of 5 stars
4.8 out of 5
536 global ratings
How are ratings calculated?
To calculate the overall star rating and percentage breakdown by star, we don’t use a simple average. Instead, our system considers things like how recent a review is and if the reviewer bought the item on Amazon. It also analyses reviews to verify trustworthiness.

Mr. D. L. Rees
5.0 out of 5 stars HEART, HUMANITY & MUCH TO THINK ABOUT
Reviewed in the United Kingdom on 7 March 2019
Verified Purchase
1959 is nearing its end, focus still very much on the Bligh family - leading lights in the small rural Australian town. Much is gradually changing in a community once so blinkered - residents becoming more tolerant towards those of different race, religion and sexuality.

Fans will have their own favourites as characters steadily evolve, especially those who suffered most in the war: nurse Sarah at the hands of the Nazis, doctor Jack tortured by the Japanese. Movingly they have been coming to terms. Bligh matriarch Elizabeth, formerly such a control freak, has mellowed. Whilst still regretting "the fraying of values", she is growingly supportive of those she would once have been the first to criticize. Similarly gossip and busybody Doris, once so prone to find fault, now shows an ever-increasing compassion that surprises.

Fans care for these people and for so many others. Take genial farmer Roy, for example - surely it impossible not to share his highs and lows.

How best to end a show held in such affection? Thankfully the creators have not cynically indulged in contrived cliffhangers. Instead all is neatly rounded, we learning in detail what became of characters now looked upon as friends.

Certainly tears may have been shed en route, but this has proved a series mainly to uplift. Throughout it has contained messages most valuable. Get priorities right. People are more important than profits. Discard prejudices. Learn how to work together, life to improve immeasurably as a result.

UK Boy
5.0 out of 5 stars Excellent Conclusion To An Excellent TV Series
Reviewed in the United Kingdom on 6 May 2019
Verified Purchase
I discovered A Place To Call Home about a year ago when a friend who goes dog walking with me happened to mention she had been watching this on daytime TV in the UK. She was so enthusiastic about the series, that I purchased series 1 to 5 and, having watched all of these, eagerly awaited series 6. Broadcast of the series is licensed to the BBC in the UK, but why has this been confined to daytime schedules which, even with catch up, is no good for those of us who have to work. A Place To Call Home is a superior drama that documents the Bligh family and every episode seems to end on a very unexpected cliffhanger. It is far better than anything shown by the BBC on prime time TV and I would go further and say that it is a far better family drama than ITV's Downton Abbey which started to become boring after a couple of series. A Place To Call Home is well written and the actors, unknown to British viewers, are able to portray the characters with convincing authenticity. Unlike many UK dramas, I will be watching all six series again later this year... and probably several times after that too.
Read more
8 people found this helpful
Report abuse

Little - un
5.0 out of 5 stars A PLACE TO CALL HOME. .....Brilliant.
Reviewed in the United Kingdom on 27 November 2019
Verified Purchase
Well, this has been one of the nicest relaxing DVD sets we have watched for ages. Based in the 50s we have reached series 5 by watching one episode when time allows, probably before we retire, no swearing, shouting, just simply peaceful watching and enjoying the authentic era of that time. The dresses, way of life, all interesting to see if you remember those days. We have yet to view series 6, we will have plenty of time over the coming holidays. Well worth it, and would recommend it to anyone wanting to recollect just how polite and respectful things were.
Read more
2 people found this helpful
Report abuse

STEVE .C
5.0 out of 5 stars LOVELY DRAMA
Reviewed in the United Kingdom on 14 March 2019
Verified Purchase
ENJOYED THIS 1950,S DRAMA , I THINK THIS IS THE BEST THAT I HAVE EVER WATCHED, I COULD,NT LEAVE IT HAD TO KEEP WATCHING, TENSION IN THE FAMILY, KEEPS YOU ON THE EDGE OF YOUR SEAT. STEVE
Read more
4 people found this helpful
Report abuse

Barbara Sabin
5.0 out of 5 stars A place to call home.
Reviewed in the United Kingdom on 24 March 2019
Verified Purchase
I have dvd’s Of all six episodes and I thought it was the most amazing television in a very long time. I loved all the characters
from day one and was very upset when they said it was ending before FOXTEL took over. Think George and Doctor were my
favourites, although I liked the Mother but thought she was very harsh at times. Think the stories behind the actors were great,
they all played a part in making this the best thing on tv. Oh forgot Roy and Doris as high on the list.
Read more
2 people found this helpful
Report abuse
See all reviews
Get FREE delivery with Amazon Prime
Prime members enjoy FREE Delivery and exclusive access to movies, TV shows, music, Kindle e-books, Twitch Prime, and more.
> Get Started
Back to top
Get to Know Us
Make Money with Us
Let Us Help You
And don't forget:
© 1996-2020, Amazon.com, Inc. or its affiliates