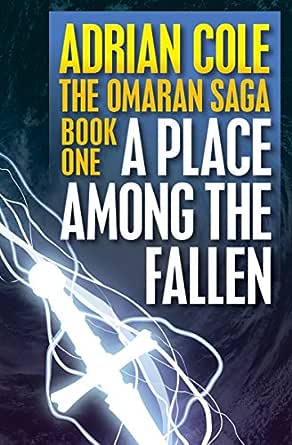 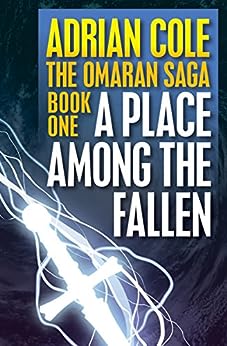 A Place Among the Fallen (Omaran Saga Book 1) Kindle Edition

Adrian Cole was born in Plymouth, Devonshire in 1949. Recently the Director of College Resources in a large secondary school in Bideford, he makes his home there with his wife Judy, son Sam, and daughter Katia. The books of the DREAM LORDS trilogy (Zebra books 1975-1976) were his first books published. Cole has had numerous short stories published in genres ranging from science fiction and fantasy through horror. His works also have been translated into many languages including German, Dutch, Belgian, and Italian.Apart from the STAR REQUIEME and OMARAN SAGA quartets being reprinted by e-reads, some of his most recent works include the VOIDAL TRILOGY (Wildside Press) and STORM OVER ATLANTIS (Cosmos Press). --This text refers to an out of print or unavailable edition of this title.
click to open popover

David Hewitt
5.0 out of 5 stars classic fantasy .
Reviewed in the United Kingdom on 31 January 2014
Verified Purchase
This book is the first in a series of four, so far this is the only one in kindle format.
I first read this at school in the mid 80's and loved them along with Donaldson and May and Feist at the very beginning
Hopefully the next 3 will be given the ebook treatment, this is a real gem of fantasy.
Recommended to all lovers of epic fantasy and a good rollicking tale!

Greg
2.0 out of 5 stars 2.5 stars- Strong beginning then loses its appeal.
Reviewed in the United States on 23 June 2011
Verified Purchase
In the world of Omara, belief in gods or magical power can be punishable by death. But when Korbillian arrives from out of a storm-tossed sea, there is no denying something is at work that's beyond explanation. Korbillian hails from another world and he's on a mission to destroy the evil growing from an earthen mound in the distant land of the east. However, as powerful as Korbillian is, he can't do it alone. Along the way, he must recruit as many others to the cause as he can. Korbillian must convince the non-believers that if they do not help, Omara will meet the same demise as his home world. Out of misfits, ruthless enforcers, fellow refugees, rival soldiers, and even Omara's animals and plant-life, an army is formed. But will they be enough? And are they really Korbillian's allies or just fodder to be sacrificed for the cause?

Calling Adrian Cole's style and prose beautiful is like calling a handsome man pretty. He has his own style which I can't quite nail down but definitely has a unique masculine quality. The first part of A Place Among the Fallen is thrilling. Mr. Cole builds a sense of foreboding that reminds me of when, in The Fellowship of the Ring, Frodo first realizes the Nazgûl are on his trail. Cole creates a dark mystery and sense of dread that pulls the reader in.

Throughout the first quarter of the book, I was sure I had found a hidden treasure and wondered why I had never heard of this series or its author before. A Place Among the Fallen is a quest story with an original plot and characters that have a lot of potential. However, just when the story really gets going, Cole's pacing becomes too rushed.

The book covers a whole lot of ground -- apparently too much. One epic event is immediately followed by another and another, with little build-up in between. So things that should amaze, become repetitious. Characters that should have been very interesting, or even endearing, seem all but lifeless.

Cole had a really great idea, and the story does take some interesting turns. Even though I had no idea what to expect, there is enough quality stuff in A Place Among the Fallen that I really did want to like it more. The beginning is very strong, but the rest of the book quickly loses its captivating appeal, never to attain it again.
Read more
One person found this helpful
Helpful
Sending feedback...
Thank you for your feedback.
Sorry, we failed to record your vote. Please try again
Report abuse

M. Fisher
4.0 out of 5 stars Omara
Reviewed in the United States on 19 July 2011
Verified Purchase
One of my all time fantasy books and series. I lost these books a long time ago and hope that the others are released at some point in time. I was glad to have found this one and to have had at least a short visit back into the world of Omara and look forward to getting a chance to follow the adventure further onward once again.
Read more
3 people found this helpful
Helpful
Sending feedback...
Thank you for your feedback.
Sorry, we failed to record your vote. Please try again
Report abuse