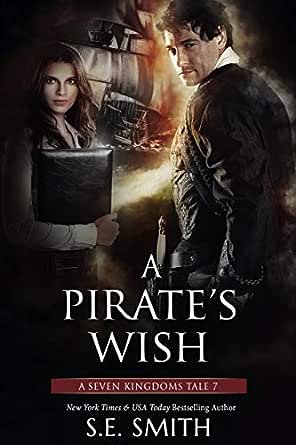 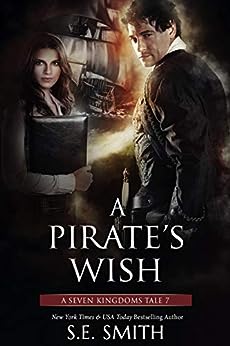 A person’s eyes are the window to their soul…

Tonya Maitland learned early that life could either be an adventure or a tragedy. She left the tragic part of her life behind a long time ago and is now focusing on the adventure! Her attempt to be one of the best investigative reporters of all time is taking a bit longer than she had planned, but all of that changes when she travels to the small, sleepy town of Yachats, Oregon.

Ashure Waves, King of the Pirates, is also the Keeper of Lost Souls. Despite all the souls within him, the emptiness he feels is suffocating. The ‘gift’ that was passed down to him feels more like a curse. When a drunken wish upon a magic mirror shows him what his heart truly desires, he is both torn and determined to find the woman revealed in the mirror—even if it means leaving the realm of the Seven Kingdoms.

Tonya’s keen eyes discern far more about Ashure than he intended, and he fears the consequences could be dire. When the Pirate King gets close to this street-smart, strong-willed investigative reporter, hilarity ensues! But will Ashure be able to protect Tonya from becoming another lost soul, or will he have to abandon what his heart truly desires in order to save her from himself?

Internationally acclaimed S.E. Smith presents a new action-packed story full of adventure and romance. Brimming with her signature humor, vivid scenes, and beloved characters, this book is sure to be another fan favorite!

Mrs Z Greenshields
5.0 out of 5 stars So that was epic
Reviewed in the United Kingdom on 13 March 2020
Verified Purchase
Thank you susan, another brilliant story, I havent wanted Ashure story for ages and it was definitely worth it, heart wrenching but well written and very enjoyable
Read more
Helpful
Sending feedback...
Thank you for your feedback.
Sorry, we failed to record your vote. Please try again
Report abuse

Élodie Nicoli
5.0 out of 5 stars Ashure rocks!
Reviewed in the United States on 11 March 2020
Verified Purchase
When a fairytale pirate lands in our magic-less world, will love be enough to woo his ladylove ...

Even if this book is a standalone, I would recommend to anyone to read the whole series as it might help to understand the whole background plot behind this story.

Ashure’s tale is one I have awaited from the very beginning, since he was introduced, he is one character that intrigues and makes you smile.
And what a lovely and sweet tale his story is.
Ashure is the perfect character right out a fairytale book, he is chivalrous, witty, resourceful and dangerous when time needs.
He gives as much as he takes and learning a bit more about him was just a pleasure. He is no complex character with an awful background that changed him in a damaged person. He takes what life threw in his path in stride, making do with it and managing to rise himself with elegance. He never let difficulties affect him, he improved with time and never his good soul was tainted by resentment or greed.
He just needs to find his destined soulmate, the one who will quiet the voices in his heart.

Tonya, having not been raised the classic way, was lost at first when she found herself orphaned as a pre-teens, why she didn’t fit in the system until she met the right person, someone who showed her how she could make a difference and she could rely on others.
And now, after a trip to fantasyland, she is back to the human world and unable to break her great news. Then a guy from nowhere crashing in her kitchen.
From there, it was a fun tale with many interactions, a story of family love, whatever the family is, the one we are born in or the one we create, an account of the weight our actions put on our soul.

I loved the setting of this book was out of the seven kingdoms realm, with Ashure meddling with the humans and his wise view of life.
This one story was less a show of magic and power than a summary of the various ranges of love.
5 stars

Kindle Customer
5.0 out of 5 stars Omg!! Amazing!!
Reviewed in the United States on 15 March 2020
Verified Purchase
I love every single series written by this author, but I think the Seven Kingdoms is my favorite now!!! This one brings me to tears at some point, in every single book!!! I knew I would love Ashure's story, no matter who his heroine was. No one could have been more perfect for him than Tonya!! I loved her!!! But together, WOW!! And Xyrie just melted my heart. I love to enter, and for a short while, be a part of this wonderful, magical world, where Unicorns are pure healing magic, and Sea Monkeys run wild!!! This author TAKES YOU THERE!! In the real world, currently ruled by fear of the Coronavirus, I NEED these books. I need the break from reality. Thank God for writers that can take us away from the harsh realities we're living through right now. From the bottom of my my heart, thank you Susan. You are an amazing human being!!!
Read more
Helpful
Sending feedback...
Thank you for your feedback.
Sorry, we failed to record your vote. Please try again
Report abuse

Karen K
5.0 out of 5 stars Very satisfying
Reviewed in the United States on 18 March 2020
Verified Purchase
I am not much for stories with magic, preferring more science based fiction. However there are exceptions to every rule and this series just confirms that. As the series progresses, each character feels more complex, the storylines well thought out. Take a chance reading the series - I think you’ll enjoy the literary ride!
Read more
Helpful
Sending feedback...
Thank you for your feedback.
Sorry, we failed to record your vote. Please try again
Report abuse

Jennifer
5.0 out of 5 stars Amazing
Reviewed in the United States on 24 March 2020
Verified Purchase
Omg I’ve waited so long for this book!!! Every time a new book in this series comes out I get so excited- but also sad because that’s another book that I’ve read and the series cannot last forever.. I LOVE this series so much
Read more
Helpful
Sending feedback...
Thank you for your feedback.
Sorry, we failed to record your vote. Please try again
Report abuse
Load more international reviews

Niki
5.0 out of 5 stars I love Ashure!
Reviewed in the United States on 13 March 2020
Verified Purchase
This entire series is one of my absolute favorites, and Ashure’s story fit in beautifully. Taking place on both earth and in the seven kingdoms, this story of mystery and suspense completely captivated me.
Read more
Helpful
Sending feedback...
Thank you for your feedback.
Sorry, we failed to record your vote. Please try again
Report abuse

Mrs Bell
5.0 out of 5 stars Awesome read!
Reviewed in the United States on 16 March 2020
Verified Purchase
Love the series! Ashure was hilarious. He was serious when he needed to be but had a heart of gold. I couldn't put it down.It had me from beginning to the end. I can't wait for the next book.
Read more
Helpful
Sending feedback...
Thank you for your feedback.
Sorry, we failed to record your vote. Please try again
Report abuse

Kindle Customer
5.0 out of 5 stars Exciting and fun
Reviewed in the United States on 13 March 2020
Verified Purchase
Ah, shades of Jack Sparrow and I love it. Think Pirates of the Caribbean mixed with a wicked Peter Pan, murder mystery and more. So very enjoyable.
Read more
Helpful
Sending feedback...
Thank you for your feedback.
Sorry, we failed to record your vote. Please try again
Report abuse

Kindle Customer
5.0 out of 5 stars As always amazing!!!!
Reviewed in the United States on 11 March 2020
Verified Purchase
If only I could rate this book with more than 5 stars !!!
Susan wrote a wonderful book. It's not only that I couldn't stop laughing, it was what I expected and so much more!!!!!!
Read more
Helpful
Sending feedback...
Thank you for your feedback.
Sorry, we failed to record your vote. Please try again
Report abuse