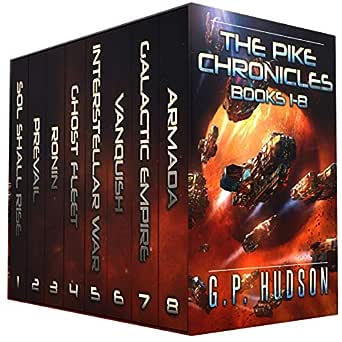 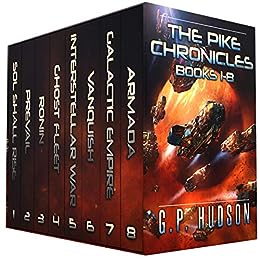 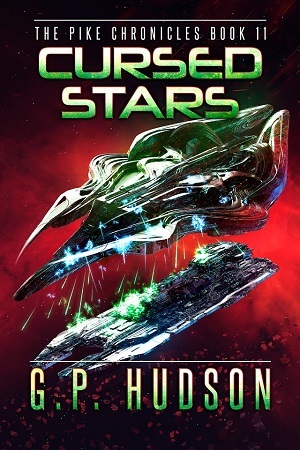 The 1st 8 hit space operas from The Pike Chronicles.

The Sol System was conquered and humans lived as slaves for 500 long years.

Now, after years of brutal warfare, humanity has been liberated. Liberation, however, comes at a cost, and the Sol System has become nothing more than a puppet state for a vast galactic empire.

For Jon Pike, a war hero who has lost everything, there is no substitute for freedom. He blames the aliens for humanity’s troubles, especially the one living inside him.

But when he is sent on a top secret mission into unexplored regions of the galaxy he discovers that humanity’s troubles are just getting started.

Can he find freedom for himself and humanity?

A battle weary Captain fighting for redemption.
An impossible search for a scattered crew.
Marines pushed beyond their limits.
A heinous alien race bent on annihilation.

When all is lost, a brave few dare to hope, and continue to fight for freedom. Do they struggle in vain? Or will they prevail?

A tenuous alliance.
A brazen power play.
A looming alien threat.
A planet's future held in the balance.

In a galaxy where danger waits at every turn, will former enemies be doomed by their past? Or can they fight together in the name of freedom?

A planet surrounded.
A homeland in peril.
A fleet outgunned.
A prophecy to fulfill.

With half the galaxy on the brink, can a fledgling alliance offer hope? Or is it doomed to perish in the pyres of war?

A homeland in ashes.
A merciless ancient enemy.
A vicious new foe.
A galaxy convulsing with war.

With humanity on the brink of annihilation, only one option remains, Interstellar War. Can Jon Pike achieve victory, and revenge, for himself and humanity?

The battle for humanity has just begun

A brutal attack.
A deadly alliance.
An alien conspiracy.
A galactic invasion.

As the prophecy unfolds, Jon Pike discovers that everything is not as it seems. With his life and the fate of the galaxy hanging in the balance, can Jon Pike survive long enough to vanquish his enemies? Or will a new dark age descend, yet again, on what's left of humanity?

A devastating invasion.
A supremely powerful enemy.
A journey into the unknown.
The future of the galaxy hanging in the balance.

The Erinyie have returned, and despair is spreading throughout the galaxy. Admiral Jon Pike and his forces are helpless against this new, all powerful enemy. Desperate to find help, Jon Pike is forced to undertake a perilous journey, to find the fabled builders of the jump gates. Will he and his team succeed in their quest? Or will the galaxy once again be plunged into darkness?

A devastated galaxy.
A mythical quest fulfilled.
Mysterious new friends.
Ruthless enemies.
A young Emperor finding his way.
A civilization on the verge of annihilation.

Admiral Jon Pike has found the fabled Builders in the Andromeda galaxy. With vague promises of help against the evil Erinyie, his warships embark on a perilous journey back home. But new, unknown enemies lurk in the darkness.

Can Jon Pike overcome countless dangers and return home in time, and in one piece? Or will he arrive to find only death, desolation, and humanity finally crushed under the alien boot?

stephen
4.0 out of 5 stars A good read that's hsrd to put down
Reviewed in Australia on 2 March 2020
Format: Kindle EditionVerified Purchase
I thoroughly enjoyed reading the adventures of the cast of this story and look forward to reading more. Only 4 stars at the editor let the author down by allowing numerous errors to creep in, hopefully these will be corrected and don't detract from the story.
Read more
Helpful
Comment Report abuse

Duncan M. Cairncross
4.0 out of 5 stars Very good - well written enjoyable series
Reviewed in Australia on 9 March 2020
Format: Kindle EditionVerified Purchase
The Pike Chronicles was an excellent Space Opera Series - and I have bought (and read) the next three books
A good series of books
But not a GREAT series

Peter G. Graham
4.0 out of 5 stars Good read
Reviewed in Australia on 4 March 2020
Format: Kindle EditionVerified Purchase
Love it, bit to much detail in the battles sometimes as after one or two battles story’s you know what is what!

But a good read!!

Paul from Sydney
5.0 out of 5 stars Truly excellent series and there is more to come!
Reviewed in Australia on 30 January 2020
Format: Kindle EditionVerified Purchase
Took me about 17 hours to read Books 1-8, but enjoyed every minute
Read more
Helpful
Comment Report abuse
See all reviews from Australia

terry howard
5.0 out of 5 stars Great read
Reviewed in the United Kingdom on 14 March 2020
Format: Kindle EditionVerified Purchase
I couldn't put it down ,plenty of action,love the alien (god's) great characters
Read more
Helpful
Sending feedback...
Thank you for your feedback.
Sorry, we failed to record your vote. Please try again
Report abuse

Dan
5.0 out of 5 stars Great book set
Reviewed in Canada on 6 February 2020
Format: Kindle EditionVerified Purchase
Love reading these books. The author paints a great story universe that is an addictive read that is hard to put down.
Read more
Helpful
Sending feedback...
Thank you for your feedback.
Sorry, we failed to record your vote. Please try again
Report abuse
Load more international reviews

Dan Bell
5.0 out of 5 stars The First 8
Reviewed in the United States on 3 February 2020
Format: Kindle EditionVerified Purchase
I will admit I love military science fiction the more volumes the better.
BUT Jon Pike 's adventures was nonstop. I don't have as much time as I would like but ever chance would end up benign Reading.
Absolutely great writing lofts of twists and turns,excellent character development, story lines well thought thru very seamlessly.
GREAT JOB HUDSON
Will be reading more of your work.

Rockladyace
3.0 out of 5 stars stars lost for horrid editing
Reviewed in the United States on 11 March 2020
Format: Kindle EditionVerified Purchase
I really enjoyed the first six books, in spite of the lousy editng, but the story line and editing both worsened by book 7, and I was quite unhappy by book 8, and basically skim read it. I won't bother with any more. Sad.
Read more
2 people found this helpful
Helpful
Sending feedback...
Thank you for your feedback.
Sorry, we failed to record your vote. Please try again
Report abuse

Ben Abbott
2.0 out of 5 stars Trying to do to much
Reviewed in the United States on 1 March 2020
Format: Kindle EditionVerified Purchase
Made it 24 chapters in before I had to quit. Backgrounds are not fleshed out or well thought through ("energy weapons" and rail guns that fire a point defense weapons). The internal dialogue of the main protagonist is not realistic for someone of his background, training, and experiences. Relationships and actions take place in an unrealistic timeframe, this series is over 2000 pages, not a forty four minute television drama. Maybe it gets better, but seeing as how these books came out every couple of months I doubt the author spent much time developing his craft.
Read more
One person found this helpful
Helpful
Sending feedback...
Thank you for your feedback.
Sorry, we failed to record your vote. Please try again
Report abuse
Load more international reviews

atfpcop
5.0 out of 5 stars Awesome read
Reviewed in the United States on 21 March 2020
Format: Kindle EditionVerified Purchase
This was a well thought out series that kept me engaged the entire read. I would recommend to anyone with a space sci-fi interest.
Read more
One person found this helpful
Helpful
Sending feedback...
Thank you for your feedback.
Sorry, we failed to record your vote. Please try again
Report abuse