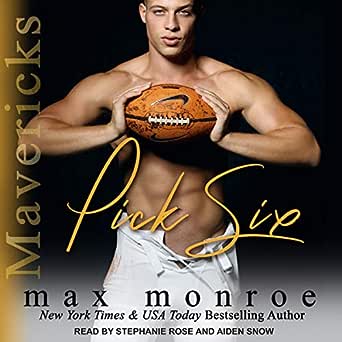 Becky
TOP 500 REVIEWER
4.0 out of 5 stars Solid performance. Don't drink hot beverages while reading. Snort laughing rating of 7/10.
8 May 2018
Format: Kindle EditionVerified Purchase
I received this ebook as an ARC in exchange for an honest review.
Pick Six is a return to the snort sputter, coffee spraying, "did they just...of course they did" comedic romance efforts of Max and Monroe (who have recently delved into darker waters with their Stone Cold Fox trilogy - also worth a look).
It has some visits from some old faves, hilarious scenes involving overusage of words I don't think Amazon likes me to use in reviews (the ninja scene, you all get me), detailed descriptions of knees and a little angst (but not too much).
From the outset, Six had my heart; Cassie's little brother had to work for it and although he's too cocky (yes, I did) to make it as my new book boyfriend, he is refreshingly upfront about his flaws and mistakes. I would have liked a little more character growth, as per the first Mavericks book, but otherwise, a solid effort from the ladies, who once again managed to get twisted song lyrics stuck in my head.

paddlefoot1397
TOP 10 REVIEWER
5.0 out of 5 stars Run, don't walk to buy this book
8 May 2018
Format: Kindle EditionVerified Purchase
This book! I thought I loved QB, however Sean was everything!

I was hooked right from the get go. Six had her very own #cockygate right at the beginning of this book, and it made me laugh so hard.

Six is the bomb1 I want to be her so much. She is funny, feisty, all that and a bag of chips!

I love how she knocks Sean down a peg or two, however I also love how he takes it all on board and goes after what he wants... Six.

I loved getting more of the Mavericks boys, especially QB! I freaking love him and Cat.

And #OhMyThatch he makes an appearance or two!

I love the push/pull between our lovelies, but ugh Six! Girl, enough with the I want him/I don't want him bizzo! I will take him off your hands in a heartbeat.

Carla, Australia
5.0 out of 5 stars Pick Six.....Better than 5 stars!
9 May 2018
Format: Kindle EditionVerified Purchase
Sassy Six and Sexy Sean will hook you from the start and take you on a hilariously fun & sexy ride with them. By the end you'll be begging Max Monroe to let you into their world where these two reside!
Read more
Helpful
Comment Report abuse

Megan Chambers
TOP 500 REVIEWER
5.0 out of 5 stars 5 Stars!!
8 May 2018
Format: Kindle Edition
Max and Monroe are the best at writing a good old fashioned rom-com. Pick Six was so much damn fun! Right from the start when we meet Six, and her naughty and hilarious thoughts, I was hooked.

And Sean Phillips? Well, he’s Cassie’s brother so of course we were going to like him! Haha.

This book is perfect if you’re looking for a fun and light hearted read. I sped through it and I thoroughly enjoyed being in Sixy’s world.

Also her chemistry with Sean is awesome, and her bond with the other teammates was wonderful as well.

Full of laugh out loud moments, and some glimpses of the BBB gang, you can’t go wrong. There’s not really much that needs to be said, apart from the fact that this one is so much fun and you won’t be disappointed.

LH
TOP 500 REVIEWER
5.0 out of 5 stars Another masterpiece by Max Monroe!
8 May 2018
Format: Kindle Edition
*ARC received for an honest review*

We always knew that Sean’s story would be as big as his personality & what a ride we go on for it! We’ve met him a number of times as he’s Cassie’s brother (as in crazy Cassie married to Thatch) & plays for the New York Mavericks (Wes owns the team). So we knew it was always going to take a special kind of someone to hold his interest for more than a few seconds. And then there is feisty, gorgeous Six. She’s a powerhouse & can keep up with the whole of the football team for her day job. So what’s a boy like Sean to do when a woman like Six puts him in his place? What a woman, what a man! Will something temporary become something permenant?
Read more
Helpful
Comment Report abuse

Ashleigh
4.0 out of 5 stars I Pick Six
8 May 2018
Format: Kindle Edition
When I picked this book I was in a major book slump and thought it would be weeks before I could enjoy reading again, I was wrong. Pick Six had me hooked from the first few pages. It is laugh out loud funny and so easy to read. I was sucked in to Six and Sean's world and didn't want to find my way out. Amazing book as always.
I loved the appearance by Cassie and Thatch, those two might need another book 😉
Read more
Helpful
Comment Report abuse

Anita_booktoread.
TOP 500 REVIEWER
5.0 out of 5 stars Laugh out loud from start to finish.
8 May 2018
Format: Kindle Edition
Hilarious! One of the best rom coms I’ve read in a while. Max Monroe did not disappoint with this. I loved Sean and Six. She was an incredibly spicy, sassy girl much like Sean sister Cassie, but she knew how to play the egotistical manwhore that was Sean. Even after she fell into bed with. I loved every minute of it.
ARC received for an honest review.
Read more
Helpful
Comment Report abuse
See all 7 customer reviews
Write a customer review
Get FREE delivery with Amazon Prime
Prime members enjoy FREE Delivery and exclusive access to movies, TV shows, music, Kindle e-books, Twitch Prime, and more.
> Get Started
Back to top
Get to Know Us
Make Money with Us
Let Us Help You
And don't forget:
© 1996-2020, Amazon.com, Inc. or its affiliates