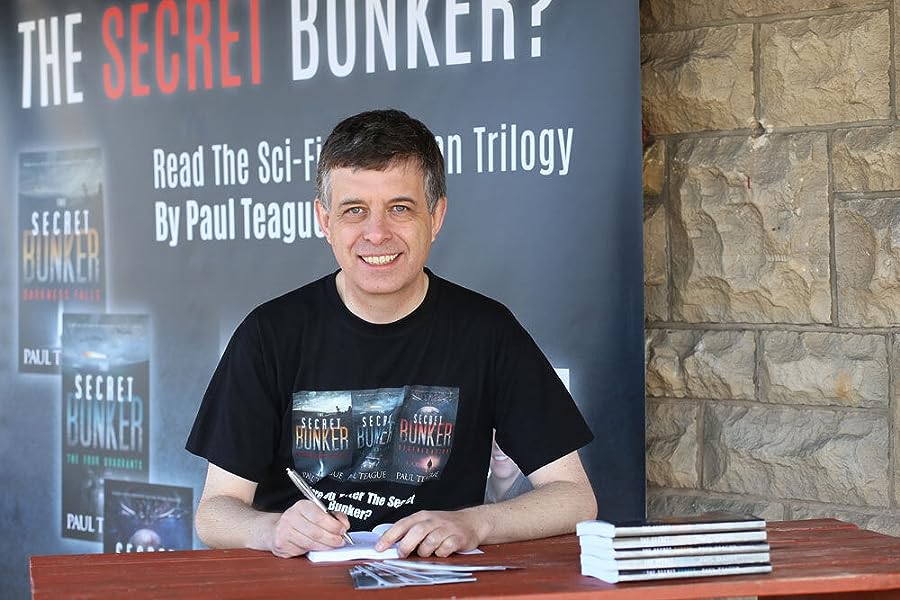 by Paul Teague (Author)
3.8 out of 5 stars 5 ratings
See all formats and editions
Sorry, there was a problem loading this page. Try again.

A deadly plague. A decaying city. A sinister force ready to step into the void ...Alex Brady is in denial.His girlfriend Audra has disappeared, his father is being held in prison and he still thinks it will all turn out fine.But his friends Deena and Carlos know better, and they can see the writing on the wall.What with the compulsory vaccination programme, the increased presence of the sinister Fortrillium and a world that's falling to pieces around them, they know this is the endgame.When Alex receives a desperate message from Audra, he knows that the time has come to take action.He must break into Fortrillium's sprawling HQ and discover the ugly truth about what's happening behind closed doors.What he finds there could herald the end of civilization ... they're in Phase 6 of a global plague.It's the final days that are the most deadly ...About the book ...Phase 6 is Paul Teague's seventh sci-fi/dystopian novel.It takes place after the events in The Secret Bunker Trilogy and years before the terrifying world of The Grid Trilogy.It's the ideal way to start reading the series if you like your sci-fi/dystopian novels non-stop action and wall-to-wall intrigue.
Read more
Previous page
Next page

New from the author of The Girl from Munich
From Australia’s bestselling author comes the story of one woman’s determination to find her place in a world that men are threatening to tear apart. Shop now.
Start reading Phase 6 on your Kindle in under a minute.

Hi, I'm Paul Teague, the author of The Secret Bunker Trilogy, The Grid Trilogy and the standalone novel, Phase 6.

I'm a former broadcaster and journalist with the BBC, but I have also worked as a primary school teacher, a disc jockey, a shopkeeper, a waiter and a sales rep.

If you love stories like The Hunger Games, The Maze Runner, Divergent, Running Man and The Giver then you’ll enjoy my sci-fi and dystopian stories.

The Secret Bunker Trilogy was inspired by a family visit to a remarkable, real-life secret bunker at Troywood, Fife, known as ‘Scotland’s Secret Bunker’.

It paints a picture of a planet in crisis and is a fast-paced story with lots of twists and turns, all told through the voice of Dan Tracy who stumbles into an amazing and hazardous adventure.

The Grid Trilogy takes place in a future world where everything has gone to ruin.

Joe Parsons must fight for survival in the gamified Grid, from which no person has ever escaped with their life.

The standalone novel Phase 6 bridges the worlds of The Secret Bunker and The Grid, revealing what happens between Regeneration and Fall of Justice.

It depicts the world as we know it falling under a dark and sinister force - things will never be the same again.

I love dystopian fiction so writing these books has been a great opportunity to finally come up with my own vision of a future world where things are going haywire.

You can find out more about my books at: https://paulteague.net/

Librarian1944
5.0 out of 5 stars Excellent!
Reviewed in the United States on 3 May 2018
Verified Purchase
This can be read as a stand-alone, or as part of a larger story. Finally, a book that is a *book,* not a continuing saga. I am interested in the rest, the characters are good, and the plot has a nice pace. Recommend!
Read more
One person found this helpful
Report abuse
See all reviews
Back to top
Get to Know Us
Make Money with Us
Let Us Help You
And don't forget:
© 1996-2021, Amazon.com, Inc. or its affiliates