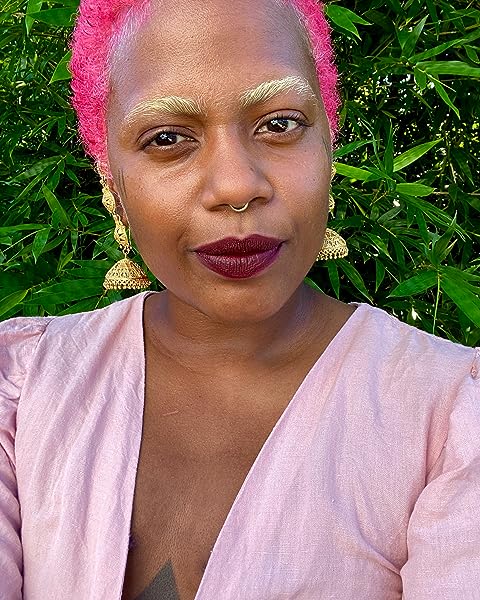 by Akwaeke Emezi (Author)
4.6 out of 5 stars 498 ratings
See all formats and editions
Sorry, there was a problem loading this page. Try again.

"By far the most striking of the [National Book Award] finalists is PET, a sinister morality tale by Akwaeke Emezi." -The Wall Street Journal "A riveting and timely work answering the questions about how you go about the world when the world around you is in denial." -Out Magazine This soaring novel shoots for the stars and explodes the sky with its bold brilliance. --Kirkus Reviews, Starred Review A compelling, nuanced tale that fans of speculative horror will quickly devour. --Publishers Weekly, Starred Review A riveting and important read that couldn't be more well timed to our society's struggles with its own monsters. --School Library Journal, Starred Review "Jam is also notable as a Black, trans protagonist in this important narrative that teens will want to read to gain some perspective on the modern political environment." --The Bulletin, Starred Review Emezi's characters are diverse in race, physical ability and especially gender.... Readers might see in Jam's surroundings a version of a world that they, like Jam, might choose to fight for. --BookPage, Starred Review "A haunting and poetic work of speculative fiction." --The Horn Book

Akwaeke Emezi makes their young adult debut with Pet on the inaugural Make Me a World list. An honoree on the National Book Foundation's 5 Under 35 list, a long-list nominee for the Carnegie Medal for Excellence, and a short-list nominee for the Center for Fiction's First Novel Prize, Akwaeke continues to receive accolades for their adult debut, Freshwater. The autobiographical novel also received rave reviews from the New York Times, the Wall Street Journal, the New Yorker, and the Los Angeles Times, among others, as well as starred reviews from Library Journal and Booklist. Their sophomore adult novel, The Death of Vivek Oji, is forthcoming in 2020 from Riverhead.

Learn more about Akwaeke at Akwaeke.com or on Twitter at @azemezi.

Start reading Pet on your Kindle in under a minute.

4.6 out of 5 stars
4.6 out of 5
498 global ratings
How are ratings calculated?
To calculate the overall star rating and percentage breakdown by star, we don’t use a simple average. Instead, our system considers things like how recent a review is and if the reviewer bought the item on Amazon. It also analyses reviews to verify trustworthiness.

Steph Loves
4.0 out of 5 stars A masterpiece, own voices, phenomenal book
Reviewed in the United Kingdom on 22 June 2020
Verified Purchase
"The angels took the laws and changed them, tore down those horrible statues of rich men who'd owned people and fought to keep owning people. The angels believed and the people agreed that there was a good amount of proper and deserved shame in history and some things were just never going to be things to be proud of."

If this isn't one of the most relevant quotes for this current time period, I'm not sure what is.

I'm struggling to put into words how I feel about this book. The writing is phenomenal and the story is one that will get under your skin and will sit with you long after you've finished the book. A masterpiece of a book. Pet is an #OwnVoices book.
Read more
2 people found this helpful
Report abuse

Toni-Marie
5.0 out of 5 stars A powerful, progressive story to expose young people to all walks of life!
Reviewed in the United Kingdom on 23 July 2020
Verified Purchase
Read this as an English teacher trying to add some diversity to our curriculum and was so pleased to find this! Written in very accessible language but with some wonderful literary devices to tell what is actually a very engaging story. It's a nice length for teaching and has everything you might possibly need to discuss with students: race, transitioning gender, child abuse, poly-amorous relationships, bullying, disability, sign language.... All simply embedded into the story without stigma or overt discussion.
Read more
3 people found this helpful
Report abuse

Sammii-Louu
5.0 out of 5 stars Monstrosity and Magic!
Reviewed in the United Kingdom on 8 November 2019
Verified Purchase
Initially it seems like a novel of dualities - monsters and angels, appearance and reality, knowing and not knowing - but PET adopts a far more nuanced view of the world. Emezi is very deliberate with their language use and, for me, the most important conflict in the novel is the difference between the “unseen” and the “invisible” - they force the reader to accept responsibility for what we see and what we choose to ignore.

I love the illustrations of blackness in this novel: Jam twisting her hair with shea butter and going to bed in her bonnet; Ube, the tall dark-skinned librarian; the soca and grime that plays in her house; the crafting of her parents’ language (“allyuh” and “dodo” and “doux-doux” and “chile” and “iwela iwe”). Sublime.

I don’t want to say much more because I don’t want to ruin it, but PET is exceptional. I don’t think I have ever read a protagonist like Jam; the proof and final covers look amazing with a dark-skinned black trans girl front & centre; the naming in this novel is gorgeous; the world-building is outstanding and Pet is such a rich creation: my new favourite character. This book is a powerful magic.
Read more
2 people found this helpful
Report abuse

TKewlovesbooks
4.0 out of 5 stars A beautiful and unique story
Reviewed in the United Kingdom on 12 August 2020
Verified Purchase
Pet tells the story of Jam, a young trans girl who lives in the utopian city of Lucille. A place where all the monsters have been defeated and banish from society. Until an inhuman creature crawls out of a painting that Jam’s mother created. The creature calls itself Pet and when it tells Jam that it is there to hunt a monster that resides in the house of her closest friend, she must help Pet uncover the truth.

Pet is the third book I have read by Akwaeke Emezi, and as with Freshwater and The Death of Vivek Oji, I absolutely adored this book.

I love Emezi’s writing. It manages to be poetic without being too verbose or losing the story. Its emotional, impactful and fairly dark. Pet has a vivid use of imagery and metaphor, stunning dialogue and beautiful moments of introspection yet it is not too embellished to still be accessible to a younger audience.

Emezi has created convincing and diverse characters, from the main character Jam, who is a black, non-verbal trans girl that communicates mostly through sign language to her best friend Redemption and his three parents (who are in a polyamorous relationship-and one of his parents uses they/them pronouns). Jam and Redemption grow throughout the novel as they deal with the impact of Pet and the mystery of the monster which does cause some conflict between them. I was really affected by their pain of not wanting to accept the possibility of the monster and the thought that it was harming others. The creature of Pet itself was a fascinating component of the novel and they had the most beautifully crafted dialogue. Some characters did not make as much of an impact; like Jam’s parents and some of Redemption’s extended family, but in a 200 page book that is forgivable and it did not detract from my enjoyment in the slightest.

The setting of the book toes the line between the utopian and the dystopian. The worldbuilding is minimal as we only know what is important for the plot. I did not mind this as it added an almost mythical, captivating element to the novel.

I loved the central message of the story: that monsters tend to hide in plain sight, and that we must be prepared to seek them out and look for the red flags. That in believing there are no monsters, we are blind to what is right in front of us. I thought this was explored well for an audience of young adults or teens.

Pet is an emotional, engaging story that deals with very dark themes in a way that is accessible to both adults and young people. As with anything written by Akwaeke Emezi, I highly recommend this book.
Read more
One person found this helpful
Report abuse

Nia
5.0 out of 5 stars Incredible and inclusive
Reviewed in the United Kingdom on 27 May 2021
Verified Purchase
I thought this was a great book. The storyline was so much fun and the world building was done so simply that it just fit. It was inclusive in a very chilled way that simply acknowledged intersections people exist in without feeling like the author was trying to prove anything. Pet was just a really inspiring and interesting story with characters who were (sometimes surprisingly) relatable. It was especially nice to see a black transgirl as a main character who was really relatable as a character with her personality and all of her fears and missteps. It had a really good storyline of magic and monsters. Also I loved all the character names being things like food. It’s weird to see a world like that in books and I would love to see more of it.
It was also really short which made it easy to read and quick to finish. Although I’d love some kind of sequel that shows more of the world they live in and lessons learned within it
Read more
Report abuse
See all reviews
Back to top
Get to Know Us
Make Money with Us
Let Us Help You
And don't forget:
© 1996-2021, Amazon.com, Inc. or its affiliates