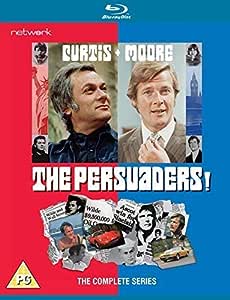 Secure transaction
Your transaction is secure
We work hard to protect your security and privacy. Our payment security system encrypts your information during transmission. We don’t share your credit card details with third-party sellers, and we don’t sell your information to others. Learn more
Details
Ships from
Rarewaves UK
Sold by
Rarewaves UK
New (5) from
$71.32 + $3.00 Delivery

The Persuaders: the Complete S

The entire cult 1970s action series.In 'Overture' playboy Lord Brett Sinclair (Roger Moore) and millionaire oil tycoon Danny Wilde (Tony Curtis) are brought together as a crime-fighting team by the crusading Judge Fulton.'Angie.Angie' sees Danny attempting to break off the partnership when Fulton suspects one of his old friends of being a hitman.'Five Miles to Midnight' has the playboy crime-fighters charged with getting an assassin-turned-informant out of Italy.'The Gold Napoleon' finds the duo investigating a failed attempt on Danny's life.'Take Seven' has them become involved in an explosive situation after coming to the aid of an attractive heiress.In 'Greensleeves' Brett returns to the derelict Sinclair family home when he discovers that it has acquired a new and unwanted occupant.'Powerswitch' has Danny and Brett investigate the murder of a beautiful girl whose body is found floating in the Cote d'Azure.'The Time and Place' sees the duo's attempts to help a pretty young woman backfire when she disappears and the body of a dead man turns up nearby.In 'Someone Like Me' Danny encounters someone who is masquerading as Brett.'Anyone Can Play' sees Danny playing the roulette tables in Brighton as a result of being mistaken for a communist paymaster.'The Old, the New and the Deadly' has Danny and Brett become involved with an embittered ex-Nazi.'Chain of Events' sees Danny chained to an attache case containing a bomb when he and Brett go camping.In 'That's Me Over There' Danny poses as Brett in order to expose a corrupt millionaire, but his ploy goes awry when the real Brett is kidnapped.'The Long Goodbye' finds Danny and Brett investigating a case of murder after discovering a skeleton in a crashed plane.'The Man in the Middle' has Brett go undercover at a dangerous secret rendezvous.'Element of Risk' sees Danny pinned with some bullion robbery charges.'A Home of One's Own' has Danny stumble upon a nest of criminal activity when he buys a cott...

4.6 out of 5 stars
4.6 out of 5
615 global ratings
How are ratings calculated?
To calculate the overall star rating and percentage breakdown by star, we don’t use a simple average. Instead, our system considers things like how recent a review is and if the reviewer bought the item on Amazon. It also analyses reviews to verify trustworthiness.

D J F
5.0 out of 5 stars Sadly they don't make them like this anymore
Reviewed in the United Kingdom on 13 February 2019
Verified Purchase
From the highly original opening theme to Roger Moore's personally selected wardrobe of safari suits and cravats this gloriously colourful show ran for just one series before Moore was whisked off to become James Bond. It tells the tale of the chalk and cheese playboy pairing of Lord Brett Sinclair and Danny Wilde, played by Moore and Tony Curtis, thrown together to right wrongs and solve cases the police can't after initially taking an instant dislike to one another. This was a major Lew Grade success, selling well throughout the world except bizarrely failing in the U.S despite the major draw of the American Curtis, drafted into the series especially to appeal to that market, with Grade cannily ensuring episodes were filmed in colour despite ITV in the U.K still transmitting much in black and white at the time of production.

With glossy and glamorous European locations and a sense of high camp The Persuaders! is rightly fondly remembered as a natural successor to Moore's own 'The Saint'. Moore and Curtis spark well off one another with great on-screen chemistry, whilst there's plenty of witty and funny dialogue to enjoy along the way. Of course there's an almost obligatory punch-up at some stage every episode that recalls the best and funniest elements of the original 'Batman' TV Series. Witty dialogue is symptomatic of the whole, with well-written scripts and usually fine, tight story lines. If you've never seen this series or have fond memories of it this collection of all 24 episodes is well worth investigation. Sadly they don't make them like this anymore.
Read more
19 people found this helpful
Report abuse

Conrad Sharp
4.0 out of 5 stars Essential viewing for Roger Moore Fans
Reviewed in the United Kingdom on 3 August 2017
Verified Purchase
I have just read Roger Moores Autobiography. This inspired me to watch some of his old work. So I ordered the Persuaders, I watch it on a 4K TV (might be relevant) and the picture quality is amazing for an old TV series, of course its in 4:3 (square-ish) but it looks good for an old series.

Roger looks so young and such a pretty boy! G*t!

Anyway, I think you have to be fan of his to enjoy this fully, as compared to modern TV its pretty corny/Carry On ish. I think it was fashionable at the time. Theres some good humour in it but the quality although very high for the period does not compare to today and non fans would probably say its pretty rubbish! The acting, in particular Tony Curtis's can be a bit ropey, maybe its the production/editing at fault. If you have watched Dads Army you will have noticed the ropey acting soemtimes especially with Capt Mannering, its abit like that. Same era I guess and same production values.

The stories are good and its great to see lots of famous actors and actresses in their prime all filmed around the South of France (and Pinewood).

If you love Rog and you think he's the best Bond (I do - the tongue in cheek style) then you'll enjoy the Persuaders.
Read more
13 people found this helpful
Report abuse

Katherine
5.0 out of 5 stars 'Take to chemicals, Nitro and Gylcerine...And I light the fuse.'
Reviewed in the United Kingdom on 17 September 2015
Verified Purchase
To be honest, you just can't beat 'The Persuaders!' The funny love, hate relationship between the contrasting characters of Danny Wilde and Lord Brett Sinclair, is a true inspiration. Roger Moore's delivery is absolutely sensational and its refreshing to see him directing a few episodes here and there. Each episode's plot is written with a good attention to detail. They are also very well scripted and with Tony's free-styling, it makes the series a whole lot more realistic. The actual picture and sound quality of the DVD is also something to be commended for, especially considering that 'The Persuaders' was done in 1971-1972. Its a real shame that there wasn't another series though! If not for the reception it received and the responsibilities Roger had in becoming the new JB, they probably would've gone on to do another. Also, the last episode ('Someone Waiting') I don't think quite finalized the end to the series enough. It could've had a more thought-provoking ending. But other than that, for one series, the characters of Danny and Brett had been explored enough to captivate audiences and leave them anticipating more.
Read more
19 people found this helpful
Report abuse

tellemthetruth
5.0 out of 5 stars THE PERSUADERS! CLASSIC TV GOLD
Reviewed in the United Kingdom on 12 December 2018
Verified Purchase
I saw this series with Tony Curtis and Roger Moore originally in 1971 and its now a firm classic. I recently had major open heart surgery @ Leeds General Infirmary in March 2018 and whilst under the morphine I had one of several real dreams. In one dream I met Jack who told me he had just acquired a contract with ITV for £320 Million with Andy Latif for 32 new Episodes. He asked if I would join him in writing it … I jumped at the chance. In reality it was all down to The Coma but I tried to write new Episodes and I have written 33 to date and 5 brand new created dramas with more to follow … all out of my Coma! Amazing but True! My Life will never be the same again ...
Read more
6 people found this helpful
Report abuse

Zoon_McCoy
5.0 out of 5 stars The escapism on offer is more than worth the money being asked.
Reviewed in the United Kingdom on 27 January 2021
Verified Purchase
This show is a sheer joy to watch day or night. But if you watch it at night or in the early morning hours. The atmosphere comes alive more in each episode. I mean you get locations such as countryside and suburbs bordering on countryside. Old houses. Abandoned buildings. A secret passage leading from the local pub to the manor house owned by Roger Moore's character. The music just adds to the magic on show. This is guaranteed to smash the lockdown blues in no time. I thought before I watched it that Tony Curtis would be the odd one out. Brash like some shows and movies like to paint Americans as. Nope. Tony's chemistry with Roger is evident in every scene they're in together. They're the perfect duo. They bounce one liner's back and fourth at each other when they get the chance. No depressing storylines here. Just good solid entertainment.
Read more
Report abuse
See all reviews
Back to top
Get to Know Us
Make Money with Us
Let Us Help You
And don't forget:
© 1996-2021, Amazon.com, Inc. or its affiliates