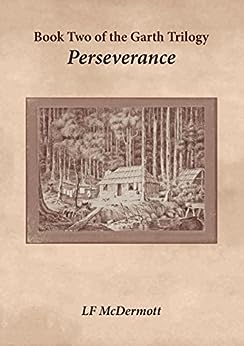 Janeen A OConnell
5.0 out of 5 stars Hobart Town grows up
Reviewed in Australia on 19 February 2018
Verified Purchase
Lynette has moved the story between generations very well. Book Two – Perseverance - sees James Garth and Mary Bellett as the central characters, with the development of their lives, including successes and the tragedy of loss, portrayed with compassion and sensitivity.

I liked the backstory of Hobart and the way it is woven into our heroes’ daily lives: including disease, unruly convicts, bushrangers, the plight of the Aboriginal population, and the issues the rapid growth of the town, raises.

The book holds the reader’s attention, and at times is hard to put down. The beginning flows seamlessly from Book One with the end enticing the reader to learn more about Edward and Sarah as they embark on their journey of discovery, into Book Three
Read more
One person found this helpful
Helpful
Report abuse

Bette Barnes
4.0 out of 5 stars Facts woven with fiction
Reviewed in Australia on 24 February 2019
Verified Purchase
I enjoyed reading this book, my late husband was a decendant of Jacob Bellett
Read more
Helpful
Report abuse
See all reviews

Bernard Hudson MD
5.0 out of 5 stars Continuation of Angels and Eagles, Now Sons and Daughters Who Persevere
Reviewed in the United States on 25 April 2019
Verified Purchase
Continues the story of the first book but adds many new charactors and narratives. The writing remains specific and the reading is easy and the author renders the individuals with kindness and grit. The history of those sent from England to Australia, some innocent and some guilty, is truely astounding: They have lost their homeland and will never return. They are the second generation to live on outside of England and discover in time the history of their parents- who are based on the lives of real individuals. It is not their land but England claims the land despite the natives who occupy the land.

Read Angels and Eagles first and then follow the lives through time to understand that what the author is writing about is your story, in a different time, a different place, how you choose to live, and how you choose to love. And through it all, hope and faith guides their decisions, actions, and relationships.
Read more
Report abuse