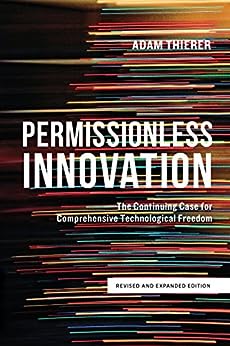 Adam Thierer is a senior research fellow with the Technology Policy Program at the Mercatus Center at George Mason University. He specializes in technology, media, Internet, and free-speech policies, with a particular focus on online safety and digital privacy. His writings have appeared in the"Wall Street Journal," the"Economist," the "Washington Post," the"Atlantic," and"Forbes," and he has appeared on national television and radio. He also contributes to the"Technology Liberation Front," a leading tech policy blog.

Thierer has authored or edited eight books on topics ranging from media regulation and child safety issues to the role of federalism in high-technology markets. He has served on several distinguished online safety task forces, including Harvard University's Internet Safety Technical Task Force and the federal government's Online Safety Technology Working Group, and he has testified numerous times on Capitol Hill.

Previously, Thierer was president of the Progress and Freedom Foundation, director of telecommunications studies at the Cato Institute, and a senior fellow at the Heritage Foundation. He received his MA in international business management and trade theory from the University of Maryland and his BA in journalism and political philosophy from Indiana University." --This text refers to an out of print or unavailable edition of this title.

Jason Potts
5.0 out of 5 stars Greatly great book. The best book.
Reviewed in Australia on 11 March 2017
Verified Purchase
Permissionless innovation is an approach to technology and innovation regulation. It suggests that if you can prentice the future, and all of the uses and applications of a new technology, and to who and how, and can understand all the trade offs and externalities positive and negative, then go ahead and regulate. But if you feel that you might not be able to do that - because of the knowledge problem- then the most effective and ethically responsible policy setting is permissionless innovation. Thierer explains why. Technology regulation is hard, but most of it is actually just stupid. It harms the people it's meant to protect, and minimises new discovery. It doesn't have to be that way
Read more
Helpful
Report abuse
See all reviews

William J Mitchell
4.0 out of 5 stars Four Stars
Reviewed in the United States on 21 June 2016
Verified Purchase
Excwllent
Read more
Report abuse
See all reviews
Back to top
Get to Know Us
Make Money with Us
Let Us Help You
And don't forget:
© 1996-2021, Amazon.com, Inc. or its affiliates