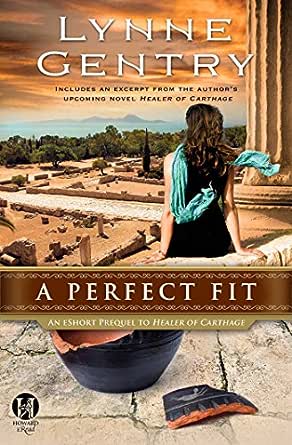 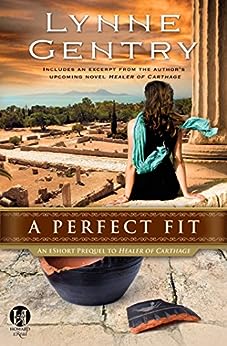 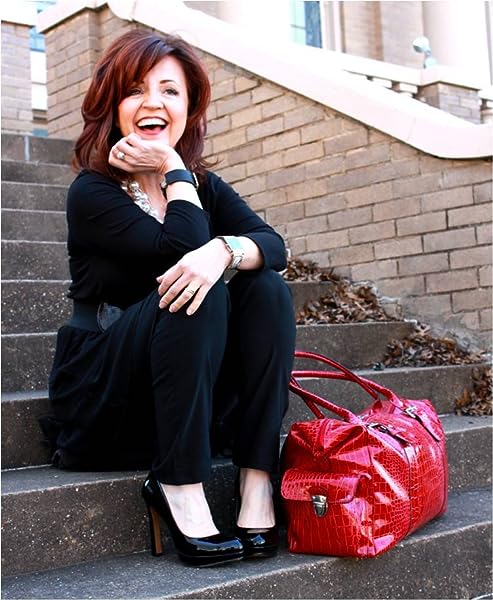 A Perfect Fit: An eShort Prequel to Healer of Carthage (The Carthage Chronicles) Kindle Edition

Lynne Gentry" "was a finalist in Westbow's 2010 fiction contest. She is a member of the American Christian Fiction Writers (ACFW), and three of her novels have been selected as finalists for the ACFW Genesis contest. Lynne is a pastor's wife and the mother of two grown children. --This text refers to an out of print or unavailable edition of this title.

Ruth Anderson
4.0 out of 5 stars Now eagerly anticipating Healer of Carthage, 3.5 stars!
Reviewed in the United States on 9 January 2014
Verified Purchase
Several months ago when I learned of Lynne Gentry's forthcoming debut I was immediately intrigued. Healer of Carthage is the story of Lisbeth, a twenty-first century doctor who finds herself lost in third-century Carthage, fighting a deadly epidemic alongside a handsome doctor (well, the summary doesn't SAY handsome, but I feel sure that's the case). How FLIPPING AWESOME IS THAT? Ancient Rome, star-crossed (time-crossed?) lovers? Togas and gladiators and archaeological adventures? I can't wait until March!

I'm so excited this release is almost here, even more so now that I've experienced Gentry's writing in this prequel novella. A Perfect Fit is the story of Lisbeth's parents and their discovery of the mystery that promises to open a portal in time. Novellas such as this can be hit-or-miss -- given the constraints of the format the story oft-times feels lacking. Happily this prequel is a well-crafted teaser, leaving me more excited than ever for Gentry's full-length debut. Medical student Magdalena and archaeologist Lawrence share a humorous meet-cute, and sparks fly as the two attempt to bridge their cultural differences, bonding over Lawrence's latest discovery. Although sketched in brief, Gentry does an admirable job of touching on the cultural and familial expectations Magdalena struggles with. I do feel that her decision to accept Lawrence's offer is too rushed, but given the limits of the novella format accepting that development on faith is forgivable. *wink*

A Perfect Fit is an entertaining, fast-paced story, and if my enjoyment of the small slice of Gentry's writing is an indication, I have high hopes for Healer of Carthage. March, come quickly! :)

HappyGirl
4.0 out of 5 stars Love her writing!
Reviewed in the United States on 15 January 2014
Verified Purchase
I was swept away into a Roman city, wondering what would happen to this dedicated doctor next. Mrs. Gentry was graciously blessed with the talent of magnificent storytelling--I love how amazingly descriptive she is and I study her usage of phrases as she paints a vivid picture in my mind.
My only negative for this book was the romance-it wasn't near juicy enough not was is hard enough to get. Magdalena and Lawrence fell in love too easily, it should have been a little harder and much more dramatic.
Love the characters and can't wait for the next book!!!!
Read more
Report abuse

Ian Acheson
4.0 out of 5 stars Strong Introduction to the series
Reviewed in the United States on 31 May 2015
Verified Purchase
I thoroughly enjoyed this short prequel as an introduction to the Carthage Series and Lynne Gentry's writing. I was drawn to both Magdalena and Lawrence immediately and his fascination with the ancient world. The short story moved at a good pace and Gentry revealed her quality as an author by seducing her reader with a strong voice and a powerful narrative.

Cyferguson
5.0 out of 5 stars I love this story and want to hear more.
Reviewed in the United States on 6 March 2014
Verified Purchase
I read this prequel after reading an Advance Reader Copy of "Healer of Carthage" (which was wonderful). I love time travel stories and Ms. Gentry has definitely got a knack. When I heard about this prequel novella, I quickly snatched it up and was even more intrigued by this "back story". I hesitate to say more because I hate spoilers in reviews, but trust me, this is worth ever penny of the $ .99 purchase price.
Read more
Report abuse

Marguerite G.
5.0 out of 5 stars A wonderful prequel
Reviewed in the United States on 28 October 2018
Verified Purchase
A wonderful prequel to an intriguing adventure in third century Carthage. This series throws the reader into a time full of unfamiliar customs and beliefs.
Read more
Report abuse
See all reviews
Get FREE delivery with Amazon Prime
Prime members enjoy FREE Delivery and exclusive access to movies, TV shows, music, Kindle e-books, Twitch Prime, and more.
> Get Started
Back to top
Get to Know Us
Make Money with Us
Let Us Help You
And don't forget:
© 1996-2020, Amazon.com, Inc. or its affiliates