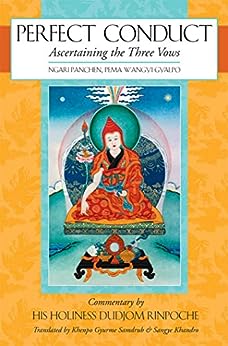 This book...fulfills a crucial need for serious students of Buddhism... At last we have a handbook in English that explains the full code of discipline [pratimoksa, bodhisattva, and tantric vows]...along with an elucidation of...philosophical principles and historical background.--from the preface by Tulku Thondup --This text refers to the paperback edition.

Ngari Panchen Pema Wangyal (1487-1542), born in the Mustang region of present-day Nepal, was an important scholar and treasure revealer of the Nyingma school of Tibetan Buddhism. Dudjom Rinpoche (1904-87) was appointed by His Holiness the Dalai Lama as the supreme head of the Nyingma tradition of Tibetan Buddhism. He was an enlightened yogi and meditation master, a discoverer of concealed treasure teachings (a terton) who was inseparable from Guru Rinpoche [Padmasambhava], the most prolific of contemporary Tibetan scholars, and an incarnate lama who had intentionally emanated for the sake of sentient beings for seventeen successive lives. Sangye Khandro has been a Buddhist since 1971 and a translator of the Dharma since 1976. She has helped to establish numerous centers in the US and has served as translator for many prominent masters in all four lineages. Sangye has been the spiritual companion of the Venerable Gyatrul Rinpoche for nearly thirty years and has continued to help serve the centers established by her root teacher, Kyabje Dudjom Rinpoche, with whom she studied and practiced for many years. Sangye Khandro is one of the founders of the Light of Berotsana Translation Group. --This text refers to the paperback edition.

All religions teach codes of ethical behavior. So too does Buddhism. This book is a translation of an ancient exposition of the three levels of moral codes in Tibetan Buddhism - the vows of individual liberation; the vows of the bodhisattva, who selflessly strives for the enlightenment of all beings; and the vows of tantra, the esoteric path of Mahayana practice. For the first time, a comprehensive explanation of these vows is presented with explanatory teachings on how to practice them in everyday life. --This text refers to the paperback edition.
Read more

Ven.Rev.Donald Ray
5.0 out of 5 stars The Three Vows is required reading for any person seeking Tibetan Buddhist ordination.
Reviewed in the United States on 16 October 2020
Verified Purchase
This book is required prior to receiving Buddhist ordination along with the Tibetan text (Dom Sum Ngam Nge )the three vows.
Read more
Report abuse

Amazon Customer
5.0 out of 5 stars Too profound for my actual experience
Reviewed in the United States on 19 March 2021
Verified Purchase
I am grateful for the opportunity to meet this work, and I hope will be able to understand it better in the future as I advance in my practice.
Read more
Report abuse

Didgeridav
5.0 out of 5 stars Five Stars
Reviewed in the United States on 6 April 2017
Verified Purchase
One of the best books to understand taking buddhist vows
Read more
2 people found this helpful
Report abuse

Buddhist from South
3.0 out of 5 stars Correcting the Path
Reviewed in the United States on 25 November 2015
Verified Purchase
Dudjom Rinpoche's extensive commentary to Ngari Panchen's (an emanation of King Trison Detzen) root text, analyze and describes one by one the moral vows of each Yana. Altough very informative, because it is a technical text, is dry, not entertaining or enjoyable reading. Nevertheless practitioners will find it very useful in order to learn to identify and correct their own faults and failures.
Read more
5 people found this helpful
Report abuse

Amazon Customer
5.0 out of 5 stars Five Stars
Reviewed in the United States on 1 November 2017
Verified Purchase
Great work!
Read more
One person found this helpful
Report abuse
See all reviews
Back to top
Get to Know Us
Make Money with Us
Let Us Help You
And don't forget:
© 1996-2021, Amazon.com, Inc. or its affiliates