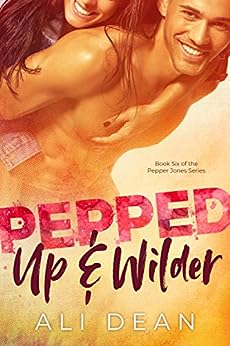 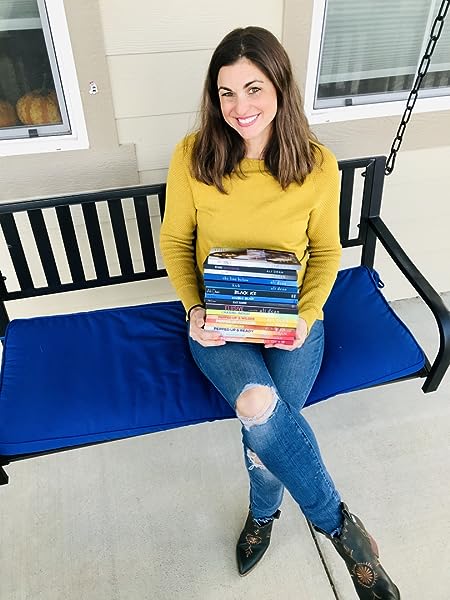 Angie
5.0 out of 5 stars Fantastic End To The Series
Reviewed in Australia on 19 December 2018
Ever since finishing Pepped Up Forever, I have been wanting more Pepper Jones. So, you can only imagine my excitement when Ali made the announcement earlier this year.

There’s no doubt that Pepped Up & Wilder had big shoes to fill, especially given that it is the final book in the series, and boy did it deliver. Having grown with the series, it was refreshing to see the maturity of the characters, which is something that I have been loving about Ali’s most recent books. While I am in no way opposed to more Pepper Jones in the future, I do feel that Pepped Up & Wilder was the perfect way to end Pepper and Jace’s story.

Once again, Ali Dean proves that she is the best female sports writer out there and I cannot wait to see what’s next.

T.H.H.
4.0 out of 5 stars A thoroughly satisfying conclusion to the series.
Reviewed in the United States on 17 May 2019
Verified Purchase
I was introduced to Ali Dean’s writing with PEPPED UP, the first book in the Pepper Jones series, and was immediately hooked. I was surprised when a sixth book was released because Pepper and Jace’s story seemed to be over in in book 5, but I was eager to dive into their world once more. Both professional athletes now, Pepper and Jace are early to mid twenties now, and life seems to be going pretty well, other than the fact that they spend a lot of time apart from each other. They’re looking to settle down in their old home town of Brockton, Colorado, with Jace vying for a spot as the quarterback on the local NFL team, the Stallions (Broncos). There’s plenty of shallow people in both the running and NFL world to deal with along with returning favorites, including Bunny, Wes, Zoe and the rest of the Brockton crew. Madeline Briscole, my favorite mean girl (i.e. the girl I love to hate) makes a brief and snarky reappearance, but she doesn’t really rock the boat this time. In fact, not much rocks the boat, and that’s my biggest issue with this last installment. There isn’t as much conflict as I’m used to in Ali Dean’s stories. And the conflict that does arise is quickly doused by our now more mature protagonists. This is what we all wanted for them, but it doesn’t make for a page-turning read. That said, it was a very satisfying final conclusion to the series and the epilogue was especially fulfilling.

Plot
There doesn’t seem to be a main plot, but there are several parallel plots taking place: where will Jace play football, will Pepper make the Olympic marathon team, and where will they settle down. The three are obviously linked. Where Jace plays has a lot to do with where they will ultimately live which in turn impacts Pepper’s running career. As I mentioned above, there isn’t much conflict in any of these and anything that does threaten their happiness, isn’t a long-term issue. But the story unfolds at a steady pace and I didn’t get bored.

Characters
It was so fun being back with Pepper, Jace and the gang! I enjoyed seeing the more mature versions of these two and cameos from some of my favorite characters from the past. I would have liked more of Bunny, but isn’t that always the case?

What I Enjoyed About PEPPED UP & WILDER
1. Pepper and Jace. They work so well together, and after watching their trials and failures through five books, I love their HEA.

2. The Running. Pepper has evolved from trail running to marathon running. Having only ever run one half, I read through these scenes with only a superficial appreciation of what is involved, but I felt sucked into the events anyway. This is where Dean’s descriptive elements really shine.

3. Supporting Cast. Both old favorites and newcomers rounded out the characters nicely.

4. NFL Drama. It was my favorite sport to watch before the Chargers up and moved to LA (don’t get me started) but I still enjoyed reading about the behind-the-scenes drama that a bunch of egotistical jocks can drum up. Tween girls ain’t got nothing on this bunch.

5. The Epilogue. A deeply satisfying wrap up to one of my all-time favorite couples.

Cassie
5.0 out of 5 stars Excellent Series Closer. Will Make You Feel
Reviewed in the United States on 23 January 2019
Verified Purchase
There is nothing like a series “closer” (you never know what could happen, but they seem wrapped up and forever happy now). The goodbyes are always bittersweet, and the book never feels quite long enough and yet for Pepper and Jace my heartfelt content. This series is special. It spans YA-NA, and the transition was extraordinary and smooth. Like a true progression/aging of a person.

Nothing would have or could have prepared me for the heartache they go through despite having a deep understanding of it myself. However, I appreciated something that effects so many ladies in this book world being brought to life in such a realistic way despite this being a fictional story. I cried with Pepper, and I felt the weight of Jace’s thoughts and emotions weighing on every part of me. This book despite the beautiful HEA/epilogue is a tearjerker.

Pepper has always been a character to admire. She is steadfast, loyal, and a fierce competitor. It was difficult to see her hurt so badly again, but as always, she sets the pace on how to bounce back with grace and dignity despite the awful circumstances she had in this book. Pepper Jones Wilder is indeed a phenomenon.

Jace. Always protecting and lovingly controlling situations to help his family succeed. This hasn’t changed, but he has displayed how emotionally available he has become to/for Pepper, and that is the best arc for his character. He has proven how multi-dimensional he is as a character throughout the series.

I am going to miss Shadow Lane and will often be revisiting. The characters and secondary characters will always be an extension of my book family.
Read more
One person found this helpful
Report abuse

Brandi Dugett
5.0 out of 5 stars Awesome
Reviewed in the United States on 31 December 2018
Verified Purchase
As with all of Ms. Dean’s other books this book was an emotional roller coaster. I laughed. I cried. But I did enjoy catching up with Jace and Piper. I highly recommend this book to anyone who has read the other books in this series!

I received a free copy of this book via Booksprout and am voluntarily leaving a review. But I also purchased a copy for myself.
Read more
One person found this helpful
Report abuse

Kindle Customer
5.0 out of 5 stars The perfect ending to a perfect series
Reviewed in the United States on 8 February 2019
Verified Purchase
Jace is sexy and Pepper is sweet. What I loved about this series is that Jace and Pepper tackled their problems together. I have given each book 5 stars and if I could, I'd give this conclusion 10 stars. If your looking for a sweet and sexy read, I highly suggest the Pepper series.

Amazon Customer
5.0 out of 5 stars Amazing
Reviewed in the United States on 22 March 2019
Verified Purchase
This was the perfect way to end the series. This book made me laugh and cry and get real thoughtful about things. I recommend this book series to everyone.
Read more
Report abuse
See all reviews
Back to top
Get to Know Us
Make Money with Us
Let Us Help You
And don't forget:
© 1996-2021, Amazon.com, Inc. or its affiliates