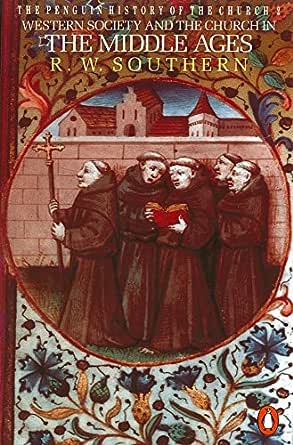 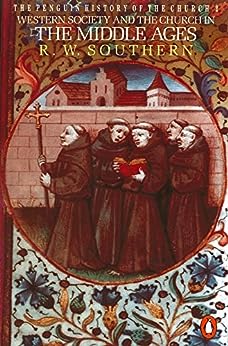 Sir Richard Southern (1912-2001) was an expert on the medieval church and author of the renowned text, The Making of the Middle Ages. He taught at Oxford and was President of St John's College there. He was knighted in 1974. --This text refers to the paperback edition.

The Keen Reader
5.0 out of 5 stars Highly recommended history of the Church
Reviewed in the United Kingdom on 17 May 2011
Verified Purchase
I have referred to this book numerous times whenever I seek clarification or explanation in any matter regarding the Church in the Middle Ages. I have found it, always, to be an exceptionally clearly written and interesting book which offers a very comprehensive overview of the Church, Religious Orders, the Papacy and all related matters in the period from about 700 to 1550. This includes the break with the Eastern Church, the Avignon Papacy, the Great Schism and the growth of Papal political identity at the risk of its ecclesiastical identity during this period.

While the book is not large (about 360 pages) every word is gold. There are no wasted sentences in this book. It's all valuable information, which can be gleaned quickly and clearly by any student of this time.

R W Southern is a well-respected author who particularly covers religious history extremely well. I have earlier read and thoroughly enjoyed his biography of Anselm, St Anselm: a Portrait in a Landscape when endeavouring to come to grips with Anselm's Ontological Argument for the existence of God.

anozama
5.0 out of 5 stars So that's what those cathedrals were for
Reviewed in the United Kingdom on 16 June 2011
Verified Purchase
Visit any European city and you will inevitably be struck by the majesty of its huge cathedral. You might occasionally wonder what they all really represent. Professor Southern's `church history as an aspect of secular history' explains the way in which the medieval church was effectively the state.

He describes how the Roman Church replaced the Roman Empire in Western Europe as the latter declined, and went on to develop in power between the eighth and fourteenth centuries. Capitalising on the regional unity established by the Romans, the papacy was able grow in stature, and by the 12th and 13th century, was the dominant secular force in Europe.

Professor Southern sifts through the documentary evidence cataloguing the activities of popes, cardinals, bishops, monks, and lesser clerics - effectively the politicians, judiciary, police, and workforce of the church.

Running alongside their religious activity ( not examined here) was a strong secular identity. Rulers were coerced, by the threat of excommunication, to maintain the pope's edicts. No war could be declared unless the church first decreed its cause to be sacred. The Pope himself waged war on `unbelievers'. Heresy was a capital offence. Non-Christians such as Jews were denied citizenship. Monks devoted themselves to praying for the souls of prominent landowners, who in return bequeathed swathes of their estates.

The church's influence declined during the fourteenth and fifteenth centuries, as non-religious thought and action gradually separated out and overcame it.

But, by then, those cathedrals were built.
Read more
8 people found this helpful
Report abuse

Anna Zachariasen
5.0 out of 5 stars The Catholic Church develops.
Reviewed in the United Kingdom on 24 May 2015
Verified Purchase
The Penguin History of the Church 2:Western Society and the Church in the Middle Ages The book covers the period from the eight to the sixteenth century ,and It becomes a time with pope and archbishop, bishops and monastic orders.There is a big chapter of the church of the pope. And the time is ready for the Reformation.
Read more
Report abuse

jdee28
5.0 out of 5 stars Excellent treatment of a narrow subject: how society shaped the church
Reviewed in the United States on 25 February 2021
Verified Purchase
This book is not a comprehensive overview of the church from 700-1500, nor is it a narrative treatment or an introduction. This book is highly selective, focusing on one central theme. Its strengths are in its organization and in the examples it gives to illustrate its theme. These examples are concrete, vivid and use quotations from original documents to excellent effect.

The theme of the book is how society shaped the church. Southern examines the main institutions of the church -- the papacy, bishops, religious orders and fringe orders -- and shows how the needs and interests of society molded each. Perhaps having written on 1000-1200 in other books, for me, the strongest insights Southern makes here are on the periods 750-1000 and 1200-1500.

Insights that particularly struck me: the importance of magic from 750-1000; the evolution of bishops, from supporting local rulers to supporting the pope; the importance of the Augustinian canons in the twelfth century, seeing them as one end of a pole, with the Cistercians on the other end and the Benedictines in the middle; the role of Franciscans and Dominicans in supporting scholars in the thirteenth century; and the fringe orders -- the book has one of the best treatments of the Brethren of the Common Life from the fourteenth century that I have come across.

The book is highly selective. There is no treatment in this book on intellectual life (the "new learning") or artistic life, nor is there much on the heresies of the period or popular religion (the "new piety"). What the book does select to treat, it does so in a deep, highly readable, substantial way. One will definitely come away with how the demands of society molded the church. Highly recommended!!
Read more
Report abuse
See all reviews
Back to top
Get to Know Us
Make Money with Us
Let Us Help You
And don't forget:
© 1996-2021, Amazon.com, Inc. or its affiliates