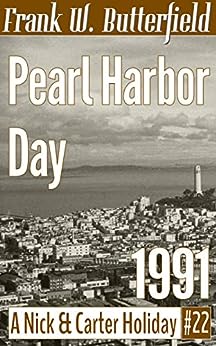 Ulysses Grant Dietz
5.0 out of 5 stars Filled with history and emotion--a gift from the author to his readers
Reviewed in the United States on 24 December 2020
Verified Purchase
As the year of holidays set in Nick & Carter’s universe draws to a close, author Frank Butterfield is really ramping up the nostalgia. This story takes place in an unoccupied apartment in San Francisco, formerly lived in by a young gay man who has died of AIDS. The apartment is in a building Nick happens to own, the rent prepaid until the next spring by Nick. More importantly, his first love, former police officer Mike Robertson, decides to host a little dinner in what was his apartment when he first met Nick Williams, then all of sixteen years old. This is the place where Nick’s first love affair unfolded.

The purpose of the dinner—including Nick and Carter, Mike and his husband Greg, along with Robert Evans and his husband Henry Winters—is to tape record Nick’s recollection of the events around Pearl Harbor Day in 1941, fifty years earlier. This is a critical moment, and one alluded to many times over the course of the Nick & Carter series; but we’ve never heard the story.

As you can imagine, it’s filled with emotion, reminding us of a time when war could be a good fight, one for which young men would line up to enlist. It depicts an America hard for my children to recognize.

As I’ve said before, Nick & Carter are like fictional parents to me—the same generation as my parents, whose young lives were disrupted by the outbreak of World War II, and who were married four years later, within days of the bombing of Nagasaki and Hiroshima. Butterfield fills in the gaps in the backstory that preceded Nick meeting Carter, even as they and their friends, all in their sixties and seventies now, reminisce about a time that changed all of their lives.

In this unreal holiday season (which, because of my many blessings, is still a happy time), these fictional men seem even more real to me. I cherish these stories, and their author’s big heart and love-filed imagination. One more holiday to go. Thanks, Frank.
Read more
One person found this helpful
Report abuse

silvia
5.0 out of 5 stars Another winner
Reviewed in the United States on 3 January 2021
Verified Purchase
This is another winner from an outstanding series. My heart was literally in my throat throughout the entire short. I have to say this is one of my faves of the series and Nick’s recounting of the bombing of Pearl Harbor will indeed live in infamy in my mind.
Read more
Report abuse
See all reviews
Back to top
Get to Know Us
Make Money with Us
Let Us Help You
And don't forget:
© 1996-2021, Amazon.com, Inc. or its affiliates