Peak and over 1.5 million other books are available for Amazon Kindle . Learn more
Share <Embed> 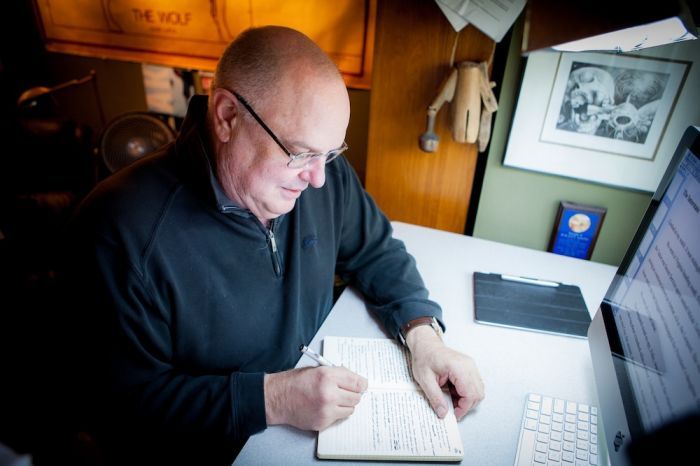 Page 1 of 1 Start overPage 1 of 1
Previous page
Next page
Start reading Peak on your Kindle in under a minute.

Roland Smith first worked with animals at the Portland Zoo, and he has been involved in animal rescues and conservation work around the world for more than twenty years. He is the author of numerous books for young readers, including JACK'S RUN, ZACH'S LIE, CRYPTID HUNTERS, PEAK, TENTACLES, and the Storm Runners series. He is also the co-author of numerous picture books with his wife, Marie. Roland lives with Marie on a farm south of Portland, Oregon. You can find him online at www.rolandsmith.com.

4.6 out of 5 stars
4.6 out of 5
859 global ratings
How are ratings calculated?
To calculate the overall star rating and percentage breakdown by star, we don’t use a simple average. Instead, our system considers things like how recent a review is and if the reviewer bought the item on Amazon. It also analyses reviews to verify trustworthiness.

Amazon Customer
5.0 out of 5 stars Great read
Reviewed in the United Kingdom on 1 April 2012
Verified Purchase
I bought this book for the more able readers in my Year 5 class (9-10 years olds) as we were learning about mountains. I took it on holiday with me at half term to read before giving it to them & loved it. It is a great story with enough realistic mountain details that they feel they are reading a good adventure book & at the same time learning such a lot about high mountain environments. All the factual things we have been studying came alive in this book. Apart from a couple of swear words (which we discussed & decided were acceptable in the context they were used, but not to be repeated by the children!) it is suitable for children of this age.
Read more
One person found this helpful
Report abuse

C.H.
4.0 out of 5 stars This Book was the PEAK of my Summer reading!
Reviewed in the United States on 31 August 2015
Verified Purchase
From jail to the top of the world!
Basically, the plot of this book is a kid named Peak Marcello (whose parents use to be climbers) tries to climb a skyscraper but gets caught by the police who thought he was a terrorist right before he made it to the top. Then in trial his dad shows up and offers to take Peak to Tibet,China away from New York in hope that eventually people would forget about his climb.Then, Peak’s dad surprises him and takes him to climb Mt. Everest.
As I mentioned the book starts out in New York. Before he climbs Everest, his dad takes him to Tibet, China to get his climbing gear. After getting his climbing gear, the rest of the book takes place on Mt. Everest.
The Main characters are Peak,Peak’s Dad and Mom,The Two Peas (Peak’s twin sisters), and his language arts teacher. The Main character,Peak,has an angry grudge towards his father for leaving them when Peak was little; however, as they get farther up the mountain they start to trust each other and that grudge slowly wears out.
The book is written in a perspective where Peak is writing this book in a moleskine notebook as he climbs Mt. Everest. He explains this at the beginning of the book. I think the author of this book (Roland Smith) nailed the way the story is being told. The way it’s written, Peak sounds just like a fourteen year old boy trying to reach the top of Everest. If that’s what the author was going for, he did a great job.
I think the theme of this book is that it’s not the mountain that matters,it’s what lies at the bottom. I know this because on the last page of the book (page 246) Peak says: “The only thing you’ll find on the summit of Mount Everest is a divine view. The things that really matter lie far below.” I don’t think the author would have made those the last two sentences if he didn’t want the reader to remember that.
Overall, I thought the book was great! I couldn’t put it down!

EJC415
5.0 out of 5 stars Good book, fast shipping
Reviewed in the United States on 10 September 2016
Verified Purchase
Good book, fast shipping, excellent condition. This book came in exactly as expected and the content is perfect for a freshman boy. My son had to write a short paper over the summer for the first day of school, and thoroughly enjoyed this book. The story is about a young man who has lost his way and when his life completely changes (because his living situation does), he not only thrives physically but also learns life lessons along the way. He learns that everyone is not as fortunate as he is, although it may not appear to him that he IS fortunate, and he also learns the value in putting other people first. He learns to appreciate the selfless acts of others and pay those acts forward to help the less fortunate. My son is not an avid reader and it was no problem getting him to stay focused on this story. Well written, well packaged, well shipped. Highly recommend for this age group and from this seller.
Read more
7 people found this helpful
Report abuse
See all reviews
Get FREE delivery with Amazon Prime
Prime members enjoy FREE Delivery and exclusive access to movies, TV shows, music, Kindle e-books, Twitch Prime, and more.
> Get Started
Back to top
Get to Know Us
Make Money with Us
Let Us Help You
And don't forget:
© 1996-2020, Amazon.com, Inc. or its affiliates