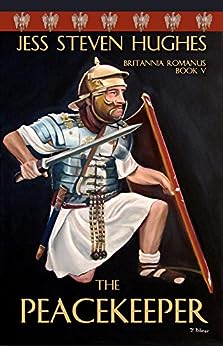 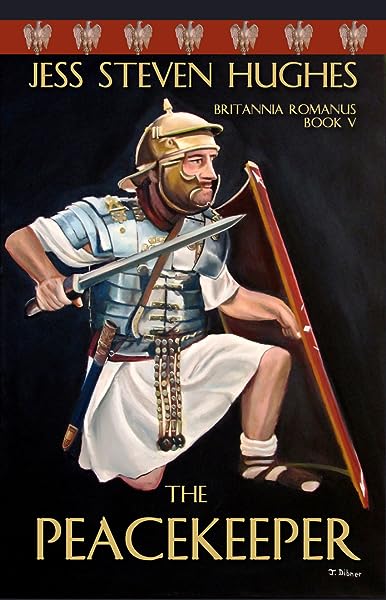 I have loved every book written by Jess Steven Hughes, historical novels and set in Roman Britain. Where, you say? Read the First four Hughes books, once referred to as the "Sign of the Eagle" series, and find out. Now Hughes has given us a new book, the Peacekeeper. And with it, new branding for his historical adventure series begins in earnest: Henceforth called the "Britannia Romanus" series, the triumph of these earlier volumes is about to be eclipsed with the publication of the Peacekeeper, #5 in this story but a magnificent stand-alone read as well. Why do I recommend the Britannia Romanus series? Because it's that good, good enough to recommend without reservation. Few can do what Hughes does, mixing genres to bring us books that open doors into worlds previously unknown, time after time. Hughes writes a combination of mystery, adventure, suspense and romance seldom equaled. A former Marine and police detective, real-life experience informs every sentence, every page. Those characters breathe and suffer and scheme and love and hate as if they were ripped from history whole cloth.

The Peacekeeper is suitable for young and old. At times, Hughes' writing reminds me of Umberto Ecco, at other times, Wallace Breen. With the Peacekeeper, Hughes delivers on the promise of earlier volumes, delivering a deeply-researched historical novel filled with mystery, adventure, romance, and command of his period so strong and effortless, so real, you'll think you've been to Roman Britain yourself!

Few can equal Jess Steven Hughes. So come spend some time in Roman Britain with a gifted author whose skill is never obtrusive and whose characters you'll never forget. -- Janet Morris

Jess Steven Hughes brought his lifetime's fascination with ancient Roman history into his debut novel, The Sign of the Eagle. The fascination continues as this has become part of a chain of books called the Britannia Romanus series. This includes The Wolf of Britannia, Part I and Part II. Another historical novel, The Broken Lance, set in Roman Britain and Imperial Rome is the first book of a duo-logy that includes The Peace Keeper. Jess is a retired a police detective sergeant, Long Beach Police Dept, Long Beach, CA. He holds a Masters Degree from the University of Southern California in Public Administration with a minor (my first academic love) in Ancient Mediterranean Civilizations. He also served four years United States Marine Corps (1962/66). As a retired person, Jess believes in keeping very busy. You must stay active mentally, physically and socially. These are a few of the keys to a long and healthy retirement. Writing novels has contributed greatly to my quality of life. He lives with his wife, Liz, on a four-acre mini-farm in Eastern Washington. His hobby is outdoor model railroading. He has an outdoor model railroad that was featured in the June/July 2010 issue of the regional magazine PRIME NORTHWEST (www.primenw.com). Check their website for the article. He was also featured in the Today segment of the Spokane Spokesman-Review, August 18, 2012, ﻿The Longest Chapter﻿, in which he discussed his quest to become a published author. Check the following link for the article. http: //www.spokesman.com/stories/2012/aug/18/the-longest-chapter/ Jess is a member of the Pacific Northwest Writers Association (PNWA) and is active in the Red Ink Fictioneers writers support group in the Spokane, WA area. --This text refers to the paperback edition.