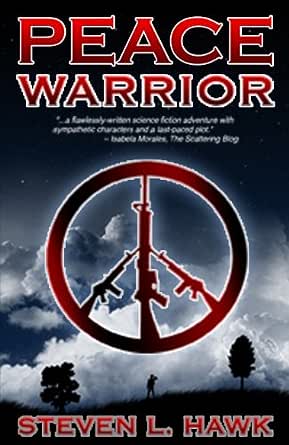 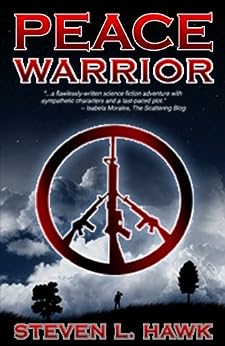 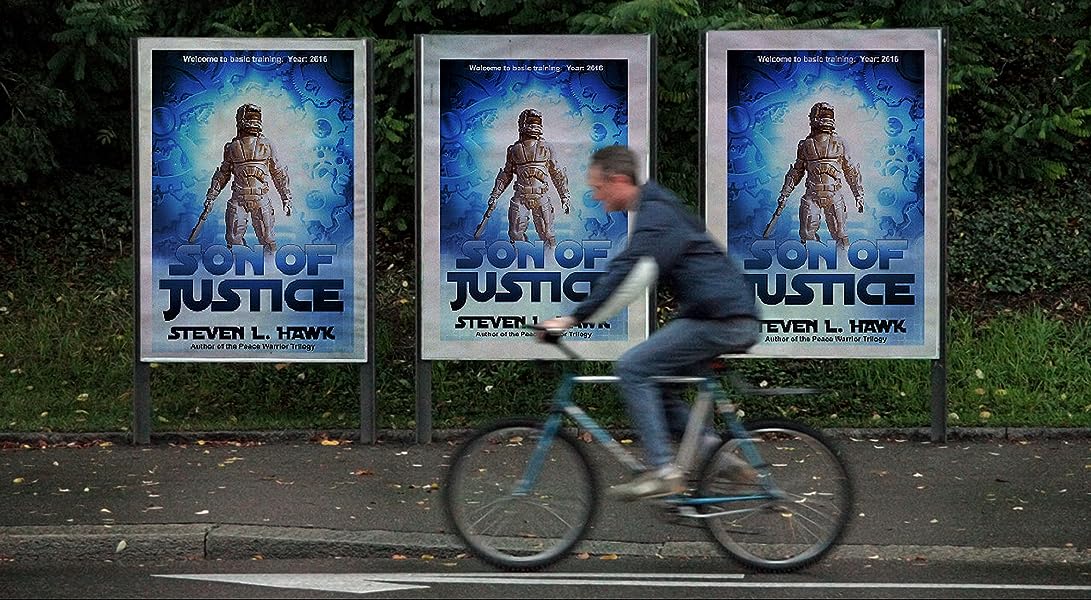 It’s the mid-21st century when Sergeant First Class Grant Justice is killed during an ambush on an enemy tank column.

Grant is humankind’s final hope against the alien menace. He must be the... Peace Warrior.

Steve spent six years as a Military Intelligence Specialist with the U.S. Army's 82nd Airborne Division before joining the ranks of corporate America. He has a B.S. in Business Management from Western Governor's University and is a certified Project Management Professional (PMP). He has traveled extensively across the United States and, at various times, has lived in Georgia, North Carolina, West Virginia, Massachusetts, California and Idaho. Steve Hawk currently resides in Boise, Idaho with his wife, Juanita. Together, they have a blended family of five sons... and two chihuahuas.

Kindle Customer
3.0 out of 5 stars Starts well.
3 January 2015
Format: Kindle EditionVerified Purchase
This started out well but gradually went downhill. To be fair, the writing was good but I gave up on it because I was finding the premise a bit silly and couldn't keep up my interest, so maybe it got better again later in the story and I've done it an injustice.
Read more
Helpful
Comment Report abuse
See all 2 customer reviews
Write a customer review

JJCEO
5.0 out of 5 stars An entertaining story with interesting characters and action!
10 August 2016 - Published on Amazon.com
Format: Kindle EditionVerified Purchase
Grant Justice is on a military mission that is close to a suicide mission for him and his troops. During their attack on a motorized enemy column he is seriously injured and dies, or does he? Over 600 years later he is revived and rebuilt in an effort to find a warrior to defeat the alien invasion force that has taken over the Earth and made humanity slaves for their needs. They are ravaging the Earth’s resources and killing humans for fun. Humanity has become so pacifist that they abhor war and violence and many would rather be slaves than fight. They are 60 billion humans that behave like sheep. Where will he find enough humans with the guts to fight and free the earth from the small number of aliens running the planet Earth? Can he lead them to victory or ultimately to certain death of all of mankind and the possible destruction of the planet itself….

This was a good story and I liked it. It was full of action and I liked the characters in the book. This is the second book I have read from this author and I have liked both of them but this story was better. I found the book entertaining and I rated it at 5 stars.

W. T. Hurt II
5.0 out of 5 stars I enjoyed this three book series as much as any I ...
12 July 2016 - Published on Amazon.com
Format: Kindle EditionVerified Purchase
I enjoyed this three book series as much as any I have read so this will be a critique of the entire series. For all readers the action is fast paced with in depth character development of the various people with different personalities. These personalities are well blended together in support of the storyline. The description of the four sentient alien cultures is imaginative and their interactions with the humans is detailed and believable. For adult readers there are two intertwined themes that are very thought provoking. First is the transition of the human culture from a violent, warlike posture prevalent today, to a state of being totally pacifistic and finally to a realization that basic freedoms are worth fighting for. Second was the evolution of Justice from a soldier only responsible for his own small squad to a leader responsible for the safety of his family, friends, and the entire human culture. I highly recommend this series to all readers who enjoy science fiction as well as action stories.
Read more
3 people found this helpful

Don53
5.0 out of 5 stars Alien Enslavement Thriller
13 December 2018 - Published on Amazon.com
Format: Kindle EditionVerified Purchase
Okay, I like sci-fi, but not outrageous complex and beyond belief tales. I like it grounded. This is that story. The Prologue had me wondering where I was going, but it soon became clear. This novel is a clear-eyed pleasure to read and I am grateful for the experience provided by the author. I learned it is a trilogy, but the first book reads well as a stand-alone too. Likely I will go further. So, if you want an adventure that is largely earth grounded but still exciting, take this action packed ride.
Read more
2 people found this helpful

Caroljane
5.0 out of 5 stars Great Military Science Fiction: Peace vs. War
20 February 2014 - Published on Amazon.com
Format: Kindle EditionVerified Purchase
A fantastic story starts with a last battle and a true warrior being killed as he goes into a frozen lake after having all his limbs shot off by enemies who are sadistically killing him.

The story moves to the present day. All of Earth gradually became non-conflict, non-violence and only Peace is acceptable behaviour. This includes no cuss words, no hitting, no anger ... nothing that could lead to violence and break the Peace.
Peace violators are sent to a Violence Prison where they are safely locked away from Peaceful citizens.

When the aliens came to enslave the human race, they found it ridiculously easy because the Peaceful humans didn't believe in violence. The Aliens are gradually squashing the will and life out of the humans... shrinking their food supply and demanding more and more mining. They are setting up a situation where eventually the humans will simply cease to exist.

A young, genius scientist is given the frozen, ancient soldier when he is found. Technology is such that they are able to replace the arms and hands and legs and feet and replace all of the organs with manmade items. They can link these to the preserved brain and after some practice, this old warrior will be able to get around better than he could before.

Meanwhile, the ruling council for the humans is realizing that their race is now on a downward spiral. While they believe in peace, they also want to survive. So when the scientist is working on the old warrior... they approve his project. Perhaps he can help them find some way to survive.

The interactions between a gruff, highly-training killing machine and people who believe in no violence are funny! The live or die and the way this first book goes about helping try to find a solution is wonderful. Full of old-fashioned action this book reminded me of many of my old favorites. I highly suggest you read this book or, go ahead and buy the version that contains the entire trilogy. You won't regret it!

BJH
4.0 out of 5 stars The Peace Warrior by Steven Hawk
26 April 2015 - Published on Amazon.com
Format: Kindle EditionVerified Purchase
The Peace Warrior by Steven Hawk was a pretty fast paced science fiction adventure where as 600 years in the future the planet is so changed that it is doomed to die. It has been invaded and taken over by an aggressive race of creatures. This planet is a peace loving population and has not fought in a war for hundreds of years and has no way of protecting their selves against violence but even worse, they only believe in peace and do not believe or even know how to fight back. The few who do believe in violence are put in prison for life. Only a one of scientist believes in fighting back. He experiments with frozen dna that was found from a frozen soldier found in ice at the bottom of an ancient lake who died 600 years ago. This is their only hope to get out of slavery and save the planet is to try to rebuild an ancient fighter. Which of course he does in secret. Then comes the exciting and dangerous job of getting rid of the strong and powerful invaders. This is really a good book and not my kind of normal reading but once I got past the first prolog I really enjoyed it.
Read more
Go to Amazon.com to see all 575 reviews 4.2 out of 5 stars
Get FREE delivery with Amazon Prime
Prime members enjoy FREE Delivery and exclusive access to movies, TV shows, music, Kindle e-books, Twitch Prime, and more.
> Get Started
Back to top
Get to Know Us
Make Money with Us
Let Us Help You
And don't forget:
© 1996-2020, Amazon.com, Inc. or its affiliates