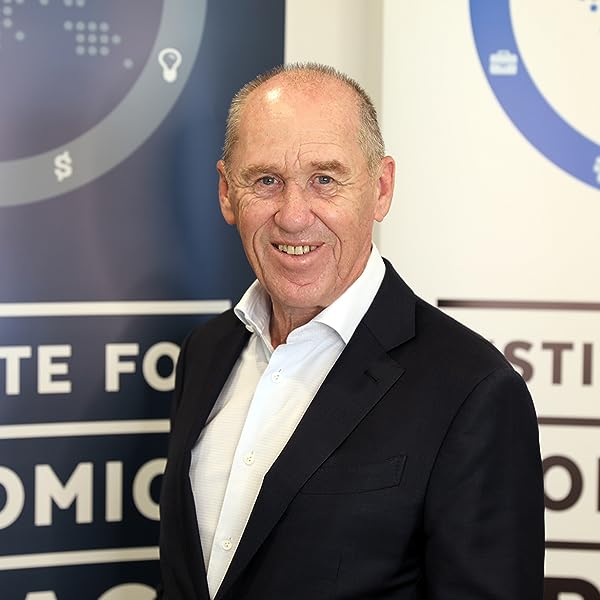 Peace in the Age of Chaos: The Best Solution for a Sustainable Future Paperback – 7 October 2020

by Steve Killelea (Author)
4.3 out of 5 stars 13 ratings
See all formats and editions
Sorry, there was a problem loading this page. Try again.

While COVID-19 is reshaping our lives, this must-read book for 2021 provides some of the answers to our most pressing global challenges. Unless the world is basically peaceful, we will never get the trust, cooperation and inclusiveness to solve these issues, yet what creates peace is poorly understood.

Working on an aid program in one of the most violent places in the world, North East Kivu in the DR Congo, philanthropist and business leader Steve Killelea asked himself, ‘What are the most peaceful nations?’ Unable to find an answer, he created the world’s leading measure of peace, the Global Peace Index, which receives over 16 billion media impressions annually and has become the definitive go to index for heads of state. Steve Killelea then went on to establish world-renowned think tank, the Institute for Economics and Peace. Today its work is used by organisations such as the World Bank, United Nations and Organisation for Economic Co-operation and Development (OECD) and taught in thousands of university courses around the world.

Peace in the Age of Chaos tells of Steve’s personal journey to measure and understand peace. It explores the practical application of his work, which is gathering momentum at a rapid pace. In this time when we are faced with environmental, social and economic challenges, this book shows us a way forward where Positive Peace, described as creating the optimal environment for human potential to flourish, can lead to a paradigm shift in the ways societies can be managed, making them more resilient and better capable of adapting to their changing environments.
Read more
Previous page
Next page

I thought I’d get through Peace in the Age of Chaos in a matter of hours. Instead, this 272-page book authored by Steve Killelea took me days. I just had to slow down because it was so interesting, not only because Steve recounts his own experience which, in itself, is fascinating, but because I needed the time to absorb all the new ideas. Amazing ideas that you rarely if ever come across elsewhere. Because this book is a game-changer. When you finish the last page and close his book, you’ll never think of peace in the same way again.
-- CLAUDE FORTHOMME, WRITER, ECONOMIST AND SENIOR EDITOR AT IMPAKTER

Steve Killelea is the multi-award-winning founder of the internationally renowned global think tank, the Institute for Economics and Peace (IEP). He is regularly quoted in the media on subjects ranging from terrorism to conflict and is also a sought-after international speaker. His funding of the IEP was recognised as one of the 50 most impactful philanthropic gifts in Australia’s history by a coalition of Australian Foundations in 2013, and he has been recognised as one of the 100 most influential people in the world on reducing armed violence. In recognition of Steve’s deep commitment to peace, he was awarded the Luxembourg Peace Prize and has twice been nominated for the Nobel Peace Prize.
Start reading Peace in the Age of Chaos on your Kindle in under a minute.

Steve Killelea is the multi-award-winning founder of the internationally renowned global think tank, the Institute for Economics and Peace (IEP). He is regularly quoted in the media on subjects ranging from terrorism to conflict and is also a sought-after international speaker. His funding of the IEP was recognised as one of the 50 most impactful philanthropic gifts in Australia’s history by a coalition of Australian Foundations in 2013, and he has been recognised as one of the 100 most influential people in the world on reducing armed violence. In recognition of Steve’s deep commitment to peace, he has twice been nominated for the Nobel Peace Prize.

James Brannon
5.0 out of 5 stars The perfect book for teachers and students interested in Peace!
Reviewed in Australia on 17 November 2020
Verified Purchase
I first came to this book as a high school geography teacher in search of resources for a unit on global interconnections. However, Peace in the Age of Chaos transcends the status of mere reference material and becomes something truly sublime.

Steve Killelea’s prose is fluid and unencumbered by overly academic jargon. This is an impressive feat given that he manages to deftly unpack the complexities of systems theory in easy-to-understand English.

Furthermore, as well as being eminently informative, this book remains consistently engaging. Mr Killelea has deftly interwoven his personal journey as a peacebuilder with empirical research on how peace can be built and sustained in the world today.

The result is a profoundly moving work that not only spotlights one man’s humbling commitment to peace but also functions as a roadmap in these uncertain time — guiding individuals on the path to positive peace (A concept I was first exposed to by this very book!)

Ultimately, I would recommend this work to anyone, but perhaps mostly to my colleagues in the teaching profession who have so much to gain from the information and life lessons contained within these 272 pages.
Read more
One person found this helpful
Helpful
Report abuse

Pera Wells
5.0 out of 5 stars Why an Australian businessman made it his business to measure peace in the world
Reviewed in Australia on 3 January 2021
Verified Purchase
This book by a brilliant Australian entrepreneur, Steve Killelea, who believes that when you are in business you must be able to measure what matters. Steve's book is his account of how he went about learning to measure peace in the world on a country-by-country basis with the the support of the Economist Intelligence Unit in Washington. They formed the Global Peace Index, which has been published every year since 2007. The launch of the Index was very successful with articles published in over 100 countries. It is a fascinating, true story and well worth reading.
Read more
One person found this helpful
Helpful
Report abuse

michael geoffrey smith
5.0 out of 5 stars Peace is challenging, but Positive Peace IS achievable and it is measurable.
Reviewed in Australia on 8 January 2021
Verified Purchase
Given current global and ecological challenges, the persistence of conflict, and growing inequality, Peace in the Age of Chaos provides hope and a methodology for sustainable human development through Positive Peace. It needs to be heeded by leaders and policy-makers regardless of their political persuasion, religion, nationality or ethnicity. The book is one man's modest testimony and contribution to a better world.
Read more
One person found this helpful
Helpful
Report abuse

JAMES MANNING
5.0 out of 5 stars Terrific insight to peace in 2020
Reviewed in Australia on 1 November 2020
Verified Purchase
Interesting story and the journey to understanding what's driving peace.... Well worth a read
Read more
One person found this helpful
Helpful
Report abuse
See all reviews

C.K.
5.0 out of 5 stars Truly insightful and engaging
Reviewed in the United States on 28 October 2020
Verified Purchase
This book is a treasure chest for anybody who tries to find answers to some of the most important questions in our life. The book is engaging and thought-provoking. Trying to understand the meaning of peace and finding pathways forward is today more important than ever. I wish that all those who exercise power were to read this book and reflect on it. The world would be a better place and we would be able to solve problems rather than create them.
- Georg Kell, Founding Director, UN Global Compact
Read more
2 people found this helpful
Report abuse

Gary Zarr
5.0 out of 5 stars Constructive Peace -- the common demoninator to solving urgent global challenges facing humanity
Reviewed in the United States on 16 January 2021
Verified Purchase
“Peace in the Age of Chaos” is a visionary book driven by data and analysis as well as by life experience. Author Steve Killelea constructs a compelling case for what he calls Constructive Peace -- “the attitudes, institutions and structures that create and sustain peaceful societies” --as being the necessary fulcrum point around which the major challenges facing humanity, such as climate change, pandemics, food insecurity, declining biodiversity, need to be considered and tackled. The implications and applications of this book should be front and center for serious, urgent discussion and implementation worldwide by policy makers and thought leaders in government and the private sector.
Read more
Report abuse

not singing
5.0 out of 5 stars Great book
Reviewed in the United States on 15 June 2021
Verified Purchase
A fantastic book that discusses how to get out of conflict through positive peace!
Read more
Report abuse
See all reviews
Back to top
Get to Know Us
Make Money with Us
Let Us Help You
And don't forget:
© 1996-2021, Amazon.com, Inc. or its affiliates