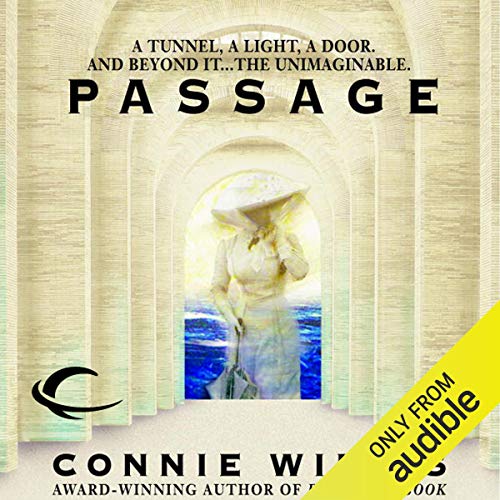 4.0 out of 5 stars
4 out of 5
152 global ratings
How are ratings calculated?
To calculate the overall star rating and percentage breakdown by star, we don’t use a simple average. Instead, our system considers things like how recent a review is and if the reviewer bought the item on Amazon. It also analyses reviews to verify trustworthiness.

Samrosie
4.0 out of 5 stars Brilliant and unexpected
Reviewed in Australia on 20 May 2015
Verified Purchase
This book has everything
Laughter,tears,heroes,disasters,science and mystery, life and death (and near death) done the way only Connie Willis can do
With one of the most startling "I didn't see THAT coming " moments ever
It will really make you think
Read more
One person found this helpful
Helpful
Report abuse

Aussielee
TOP 1000 REVIEWER
5.0 out of 5 stars Love Connie Willis
Reviewed in Australia on 29 August 2018
In Passage, two doctors, Joanna Lander and Richard Wright, team up to study NDEs (near death experiences), hoping their research will assist with reviving patients who are coding (going into cardio arrest). The scifi aspect comes in when Dr Wright comes up with a cocktail of drugs that replicates a NDE in a healthy person. In true Willis comedic fashion, the number of volunteers the doctors have lined up for the trial dwindles to such an extent that Joanna herself decides to go under and experience a NDE firsthand. This is where the tension begins to build and the drama unfolds until a climactic moment that no reader will ever see coming.

This is the fifth Willis novel I've read and I've become very familiar with her style. I can understand why some people become frustrated with it when reading her books, but I just continue to adore it and her.

Willis always has pop culture/historical moments she references throughout her books. For example she incorporated Agatha Christie and Dorothy Sayers novels into her Oxford series plotlines as well as events such as the Blitz and the Black Death. In Passage, she references many movies and uses disasters to make her plotline more relatable to the modern reader, in particular the sinking of the Titanic.

Willis's research must always be extensive because without a doubt you’ll learn more about the Titanic from this novel than you will from any other source. (And fear not, if you’re like me and hate the movie, you’ll still love the references to it in this book.) I was not as familiar with any of the other disasters mentioned: the Great Molasses Flood (who knew?), the Hartford circus fire, and the Hindenburg, so it was interesting to learn about these events.

The other thing Willis does in every book is include a plethora of physical reasons the characters can’t find solutions to their problems. Passage is set is in the 90s, so there is no internet and very limited mobile use. Willis includes phones and pagers which aren’t answered, messages that aren’t passed on, and books that can’t be located. The physical layout of the setting, a hospital, is also one large stumbling block for the characters, with its labyrinth of walkways, blocked off stairways and lifts that only reach certain levels.

While some readers might be frustrated or lost at why she is including such frivolous details, others will see that everything has its place and reason and nothing is as random as it seems. And, in particular with Passage, it’s a metaphor!

Another thing Willis does really well is supporting characters. They’re always so different and detailed and just as important to the stories as the lead characters (actually, there is often a question of who is a lead character and who isn't, I would sometimes argue her books are true ensemble pieces). The standout in Passage for me was young Maisie, who has spent a large chunk of her life in hospital and is on the heart transplant list. Everything comes back to her in the end and tears will be involved.

Just as a warning, yes, there definitely will be tears. They might creep up on you when you least expect it too. (For me, it was a moment featuring Joanna’s clothes and makeup.) However, even though death is the main subject, Willis handles this with such aplomb that nothing gets overly depressing or maudlin and at times death feels quite inspirational (as young Maise proves at one point, there are worse things than death).

As per usual, Willis offers us many emotional and intellectual themes in amongst her deceptively basic scifi plot. You’ll think about your faith a lot whilst reading Passage. There’s also a strong theme of friendship and the sense of family with friends versus true blood relatives. These themes were all majorly covered at one time or another in the Oxford time travel series yet this didn't annoy me and only reinforced some of my previous personal conclusions.

I fret for people who dismiss Willis's work because it's scifi. Yes, her books are scifi, but they’re so realistic you’ll forget you’re reading scifi within a few chapters. They don’t fit easily into any genre in fact. Yes, there’s hints of romance in all her books but they are merely hints. (Passage had an undercurrent of romance that I was not expecting at all but I found myself really enjoying it.) They are comedies and tragedies and very much literature.

She is truly one of the most deceptively intelligent writers there has ever been and with so many layers to her writing, it’s difficult to cover everything in a couple of hundred words review. Let’s just say, like all her other novels, I can’t recommend Passage enough.

D. Thomas
5.0 out of 5 stars Vivid and captivating read
Reviewed in the United Kingdom on 19 December 2020
Verified Purchase
Characters that are very much alive brought this story alive and presented a theory of the NDE in an entertaining manner.

Even if, like myself, you don't agree with the NDE perspective this book presents, you should come away fulfilled. Looking forward to reading more of Connie's works.
Read more
Report abuse

Jason Mills
5.0 out of 5 stars Her best since Doomsday Book
Reviewed in the United Kingdom on 7 April 2002
Verified Purchase
"Passage" seems to be about near-death experiences (NDEs) and, oddly, the Titanic; in fact it's about death itself. This is a book with a lot of middle, a lot of irritating running about which seems to get nowhere; in fact, this construction is a metaphor for the book's thesis about NDEs. So it's a novel that enacts itself.
There's always a thrill in Willis's dénouements. Here, even the long-awaited revelation of what the heroine's English teacher said in class 20 years earlier is an improbable joy for the reader. Quite how Willis constructs these intricate, cross-genre, multi-themed matrices of character and narrative is beyond me, but long may she continue. This one is powerful, life-enhancing, moving and funny. So no change there.
Read more
3 people found this helpful
Report abuse

morleygirl
3.0 out of 5 stars A good read
Reviewed in the United Kingdom on 3 September 2019
Verified Purchase
Interesting story, but the same points laboured to death (pun). Could have done with better editing.
Read more
Report abuse

Alema Ram
3.0 out of 5 stars A reasonable read if a bit long winded...
Reviewed in the United Kingdom on 13 August 2017
Verified Purchase
I enjoyed it. It's a bit long winded and slow but the idea is good - ish, even tho' it's a bit disappointing at the end. I kept reading until the end, which says something, and I did appreciate the research that had gone into it and the way it was written. The characters were alive and held our sympathies.
Read more
Report abuse

cribbage
5.0 out of 5 stars Good
Reviewed in the United Kingdom on 3 April 2021
Verified Purchase
The excellent Connie Willis wrote another winner with this enthralling story.
Read more
Report abuse
See all reviews
Back to top
Get to Know Us
Make Money with Us
Let Us Help You
And don't forget:
© 1996-2021, Amazon.com, Inc. or its affiliates