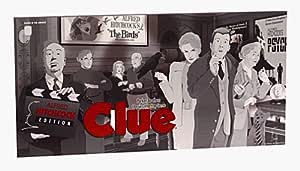 by Parker Brothers
5.0 out of 5 stars 3 ratings

C Wahlman
5.0 out of 5 stars A perfect twist on the classic game!
Reviewed in the United States on 23 September 2011
Verified Purchase
I love to play board games and I love to watch Alfred Hitchcock films. This combination is perfection: the Alfred Hitchcock edition of Clue!

The pieces are traditional: plastic pawns coordinating with the characters, pewter weapons, sheets to keep track of your accusation, game board and dye. It is the same game, so same rules apply. But this Clue is specialized because of the characters, weapons, and sets from his classic films.

You should create some atmosphere by playing a Hitchcock film while playing! I highly recommend it!

Vacheh Shahmoradian
5.0 out of 5 stars Great gift!
Reviewed in the United States on 11 January 2018
Verified Purchase
Bought this for a friend for Christmas. Came exactly as described. A great gift for any Hitchcock or Clue fans.
Read more
One person found this helpful
Helpful
Sending feedback...
Thank you for your feedback.
Sorry, we failed to record your vote. Please try again
Report abuse

Ester Kan
5.0 out of 5 stars Right on time
Reviewed in the United States on 29 August 2018
Verified Purchase
Had lots of fun playing, tks!
Read more
Helpful
Sending feedback...
Thank you for your feedback.
Sorry, we failed to record your vote. Please try again
Report abuse