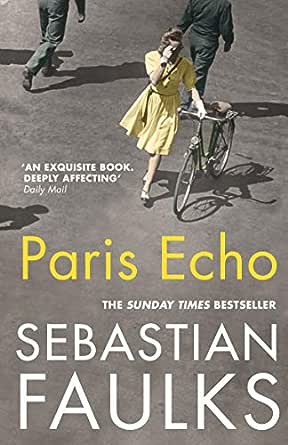 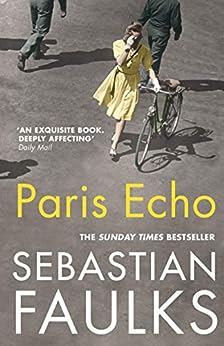 "Superb... weaves winningly between the present and the second world war, between Tangiers and Paris." (Alex Preston Observer)

"‘[Paris Echo is] brimming with Faulks’s deep affection for Paris. His outsider’s interest in quirky street names and quaint corners transports his readers there too. And in the end, the book is powered by his ambition to evoke that place, its ghostliness, those spectres of history, lurking around every beautiful avenue" (Guardian)

"A brilliantly plotted and occasionally hallucinatory novel, in which the author's genius for literary ventriloquism is shown off to startling effect." (New Statesman)

"Paris Echo doesn’t disappoint… Faulks is doing what he does best, marrying careful historical research with a good ear for dialogue" (Melissa Katsoulis The Times)

"[An] exquisite book... a deeply affecting, wholly unsolemn treatment of some of the 20th century's darkest moments." (Daily Mail)

"The prowess of his storytelling makes him a graceful guide through "the great world of the past"... Cunningly crafted, Faulks's fictional bridge between the French past and present has its sentimental side." (Financial Times)

"There is humour and humanity in this bold, perceptive novel." (Daily Express)

"Both thoughtful and thought-provoking with memorable characters and a profound sense of the past in the present" (Hannah Beckerman S Magazine, Sunday Express)

"Here is Paris in all its beauty and squalor, its blood-stained history and its ability to instil in its lover a sense of the true sweetness of life. So this intelligent, moving, often disturbing novel is also really a love letter to Paris and indeed to France." (The Scotsman)

"There is much to learn from Paris Echo about the city’s complex identity, and about the way we view the past." (Sunday Times)

The new novel from the bestselling author of BIRDSONG and WHERE MY HEART USED TO BEAT.
See all Product description

Christine Wilson
5.0 out of 5 stars As usual, a cracking read
9 November 2018
Format: Kindle EditionVerified Purchase
I have read all of SF's books, and this is one of my favourites.
I emerge blinking from my immersion in the worlds of Paris present and past, and in Tarik's world, different as it is.
I am not adverse to a happy ending, either, although there is much in this book which is sad, and invites reflection.
I am glad that Tarik's journeys into the past are not explained...better that way.
Sad to finish this book.
Read more
One person found this helpful
Helpful
Comment Report abuse

Jo-jo
2.0 out of 5 stars So disappointing
20 July 2019
Format: Kindle EditionVerified Purchase
After having been thoroughly captivated by two of Faulks' earlier novels, Birdsong and Engleby, I was looking forward to immersing myself in Paris Echo. But I found it disjointed and shallow and the stories within were not resolved. I shall go back to some of Faulks' earlier works to see if I can rediscover his magic.
Read more
Helpful
Comment Report abuse

Toby Potter
3.0 out of 5 stars Ho hum
1 October 2019
Format: Kindle EditionVerified Purchase
Not his best by any means. All a bit predictable really 9 more words required to get out of this
Read more
Helpful
Comment Report abuse

asil79
2.0 out of 5 stars Weak characters
14 December 2018 - Published on Amazon.com
Format: Kindle EditionVerified Purchase
I was pretty disappointed in this book. I enjoy strong character development and escaping into character's lives and predicaments. I found the characters were not developed strongly in this novel or were not interesting or admirable at all. I finished it but could easily have not. The characters were diluted by too much information on the geography and metro of Paris. Which may be touching to someone who has been and a nostalgia plays a part, but to me it was boring and just filler. Felt like a novel filling a quota for a fantastic author.
Read more

Kim Saffron
4.0 out of 5 stars Much better than his last book
28 October 2018 - Published on Amazon.com
Format: Kindle EditionVerified Purchase
This is a very readable book that brings together a number of stories from different periods. The characters are believable and engaging. and the information about Paris is integrated well into the story.
Read more

Valerie McRoberts
5.0 out of 5 stars A wonderful evocation of Paris, present and past.
18 November 2018 - Published on Amazon.com
Format: Kindle EditionVerified Purchase
The novel presents the magic and the horrors of France's capital city. The importance of owning and acknowledging the guilt and the pleasures.
Read more

Sharon
4.0 out of 5 stars we experience individual and national echoes from the past.
30 May 2019 - Published on Amazon.com
Verified Purchase
Quite a lively book club discussion with many personalities attracted to different themes and characters.
Read more

Geri.
3.0 out of 5 stars I was satisfied with the ending
6 November 2018 - Published on Amazon.com
Format: Kindle EditionVerified Purchase
I liked the intrigue of the stories within the story.
Read more
Go to Amazon.com to see all 7 reviews 3.6 out of 5 stars
Get FREE delivery with Amazon Prime
Prime members enjoy FREE Delivery and exclusive access to movies, TV shows, music, Kindle e-books, Twitch Prime, and more.
> Get Started
Back to top
Get to Know Us
Make Money with Us
Let Us Help You
And don't forget:
© 1996-2020, Amazon.com, Inc. or its affiliates