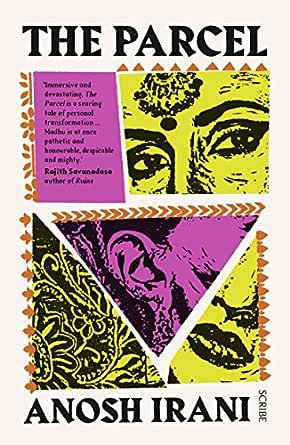 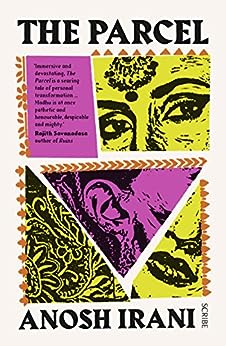 The Parcel is the masterful new novel from acclaimed author Anosh Irani, and is a savage and beautifully rendered story about community, belonging, and the cheapness of human life. --This text refers to an alternate kindle_edition edition.

LONGLISTED FOR THE DSC PRIZE FOR SOUTH ASIAN LITERATURE
FINALIST FOR THE ETHEL WILSON FICTION PRIZE (BC BOOK AWARDS)
FINALIST FOR THE WRITERS' TRUST FICTION PRIZE
SHORTLISTED FOR THE GOVERNOR GENERAL'S LITERARY AWARD "As engrossing as any thriller, Anosh Irani's novel offers readers so much more. An aggregate of storytelling accomplishments, The Parcel captivates with its vividly rendered characters. . . . Deeply affecting." --The Quill and Quire

"A magnificent novel with powerfully imagined characters . . . bold, bawdy, tender, funny, sorrowful, all that life is made up of." --Anita Rau Badami, author of The Hero's Walk "Part of the way this excellent book heals such a sprawling, horrifying reality is with beauty. . . ." --The Globe and Mail

"As engrossing as any thriller, Anosh Irani's fourth novel offers readers so much more. An aggregate of storytelling accomplishments, The Parcel captivates with its vividly rendered characters and commands the reader's attention by way of unnerving--and at times profoundly disturbing--portraiture of an abject group at the bottom of an already denigrated community at the heart of India's booming financial hub, Mumbai. . . . Irani leads readers on a memorable walking tour through what is likely alien territory for them. . . . The various episodes in the novel are deeply affecting, giving the reader ample reason to agonize over the fact that such a place exists at all. Irani's compassion for these discarded souls, and the assertion of their essential dignity, renders them simultaneously touching and distressing." --Quill & Quire (starred review)

"Set amid the raucous swirl of Bombay's Kamathipura Red Light District, The Parcel is a searing indictment of the sex trafficking industry and a compassionate portrait of a troubled but resilient community. In Madhu, the transgender, retired prostitute at the heart of the novel, Anosh Irani has created a powerful yet flawed character to steward the reader through difficult, often disturbing material. Her struggles--with her past, with the legacy she might leave behind--are rendered with honesty and grace. Harrowing, enraging, unexpectedly humorous, and also profoundly sad, The Parcel is a haunting work of fiction that illuminates the ways in which history, both political and personal, pervades the present day." --2016 Rogers Writers' Trust Fiction Prize Jury Lauren B. Davis, Trevor Ferguson, and Pasha Malla "Irani takes readers into the depths of Mumbai's teeming Kamathipura district, whose economy depends on prostitution bordering on slavery. The story centres on eunuch and former sex worker Madhu--now a beggar and sometime aid to a powerful madam--who is called on to groom a pre-teen Nepalese girl for work in the brothel. Sounds grim, but Irani's ear is attuned to the raucous humour of the sex workers as they do what they can to maintain their dignity. A harsh dose of reality administered with wit and clarity." --NOW "The Parcel takes on weighty, difficult content involving extensive research, and including fascinating, complicated characters." --CBC Radio "[A]rresting. . . . A searing, disturbing, and intimate portrait of Kamathipura . . . his novel exposes a heartbreaking reality." --The Vancouver Sun "Irani's novel does not flinch from its dark subject matter, and is already being buzzed about as one of the most provocative works of the fall season." --Quill & Quire "Irani brings to light a fascinating array of characters." --Toronto Star "The Parcel showcases the perceptive acid-streaked sensibility that distinguishes Irani's novels and plays. . . . As in Irani's novel The Song of Kahunsha . . . disenchantment remains a primary motif in The Parcel. But though Irani makes the hell of slums visceral on his pages, he offers here the ways feral compassion can turn to grace." --National Post

"Anosh Irani's The Parcel is a dark, intimate and probing look at Kamathipura's Hijra community through the eyes of its protagonist Madhu. . . . Madhu's moments of realisation are evocatively captured, as the reader plays silent companion to her travails and by default, the lesser-known, insightful side to the Hijra community. . . . Dark, disturbing and yet triumphant . . . riveting twists and turns. High on drama and emotion set in the seamier side of Mumbai, this novel is a page-turner." --Mid-day (India) --This text refers to the paperback edition.

ANOSH IRANI has published four critically acclaimed and award-winning novels: The Cripple and His Talismans (2004), a national bestseller; The Song of Kahunsha(2006), which was an international bestseller and shortlisted for Canada Reads and the Ethel Wilson Fiction Prize; Dahanu Road (2010), which was shortlisted for the Man Asian Literary Prize, and The Parcel (2016), which was a finalist for the Governor General's Literary Award for Fiction and the Writers' Trust Fiction Prize. His play Bombay Black won the Dora Mavor Moore Award for Outstanding New Play (2006), and his anthology The Bombay Plays: The Matka King & Bombay Black(2006) and his play Men in White were both shortlisted for the Governor General's Literary Award for Drama. He lives in Vancouver. --This text refers to the paperback edition.
Read more

Amazon Customer
5.0 out of 5 stars Intense read. Very disturbing
Reviewed in Australia on 16 September 2018
Verified Purchase
Excellent story. Very thought provoking. What with all the advancements in our world girls are still being sold into prostitution. It makes me sick to think this girl in the story is the same age as my daughter. What people will do to others.
Read more
Helpful
Report abuse
See all reviews

Janet B
5.0 out of 5 stars SHORTLISTED FOR THE GOVERNOR GENERAL'S AWARD AND MORE!
Reviewed in Canada on 14 November 2016
Verified Purchase
This is a unique story and very different from anything I have ever read.

Madhu was born a boy. Because he was very effeminate, he was not accepted by his parents. His father was a college professor and he was ashamed of his son. Madhu had to leave home.

Madhu ended up in Kamathipura, the red-light district of Bombay, India. He met 80 year old Gurumai, head of the "hijra" clan. Gurumai was born both male and female with minuscule parts. Gurumai had thirty disciples working for her and she chose seven to live with her in the house she owned. Madhu was one of them. She had Madhu castrated and Madhu then spent most of her life as a sex worker. She gave half of her money to Gurumai. She considered herself a "hijra", a eunuch. She was a person who belonged to the third sex.

Madhu was now 40 years old. She works the streets as a beggar to support Gurumai. One day she receives a call from a woman named Padma Madam, the most feared brothel owner in the district. She tells Madhu that a "parcel" has arrived and she wants her to break her in and prepare her for her fate. Gurumai forces her to take the job. The "parcel" is a code for a 10 year old girl, who has been trafficked from the provinces. She was sold by her aunt, who was betrayed and told that the girl would have a better life working in a factory or as a maid.

She arrived in a cage. It was Madhu's job to break her down and prepare her for her new life. She was given a new name. She was forced to remember what to say when questioned by the police. She was brainwashed. There was a man waiting to buy her and would pay Padma Madam a lot of money for this 10 year old virgin.

While getting involved, Madhu's past comes back to haunt her and the work with the "parcel" gets harder. You will soon see how hard it gets.

Anosh Irani's writing is outstanding. The writer has taken the truth of what exists in the red-light district of Bombay and has written a novel about it. The story is about sex trafficking of young girls, prostitution, drug addiction, rape, castration etc. The subject matter is tough to digest, but illuminating.

a.khare
5.0 out of 5 stars On of the best books I've read! Don't miss it!
Reviewed in India on 9 February 2017
Verified Purchase
Some books make you a spectator and let you be the observer. Some books hold your hand and take you on a journey wherein you become a companion and truths and fears are revealed to you. THE PARCEL comes in the second category. The narrator is Madhu,a hijra who is given the task of preparing a 'parcel'- a trafficked underage girl for obvious reasons. The story is handled with expertise and sensitivity. The topic is so explosive - exploitation, prostitution,hijra life and society's apathy. There is a certain completeness to the story as all your unasked queries are subtly solved. The quality of writing and the depth of each nuance is so perfect that I was relieved of being just a voyeur. Madhu's agony of being accepted by society and her family just for who she is touched my heart. Who are we to judge anyone else for what nature has made them- dark, short or even hijra? No longer will I feel revulsion when a see the third sex. Read this book to unveil new emotions you never knew you had!
Read more
Report abuse

Cindyw
4.0 out of 5 stars Worth a read
Reviewed in Canada on 15 December 2017
Verified Purchase
I enjoyed this book despite the sort of darkness of it. Created an awareness in me that gave me compassion for transgender individuals who are not loved and accepted.
Read more
Report abuse

vadne
5.0 out of 5 stars excellent service
Reviewed in Canada on 14 March 2019
Verified Purchase
Received book before its confirmed delivery date. Book in brand new condition! Thank you!
Read more
Report abuse
See all reviews
Get FREE delivery with Amazon Prime
Prime members enjoy FREE Delivery and exclusive access to movies, TV shows, music, Kindle e-books, Twitch Prime, and more.
> Get Started
Back to top
Get to Know Us
Make Money with Us
Let Us Help You
And don't forget:
© 1996-2020, Amazon.com, Inc. or its affiliates