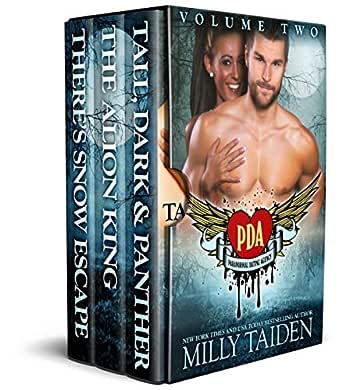 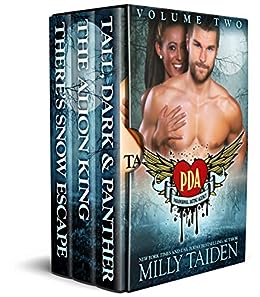 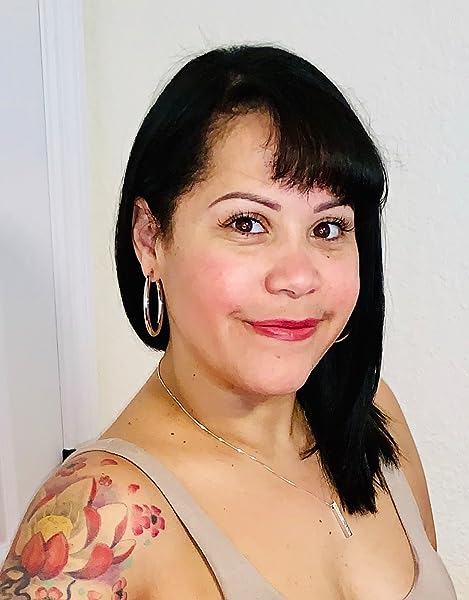 4.8 out of 5 stars
4.8 out of 5
105 global ratings
How are ratings calculated?
To calculate the overall star rating and percentage breakdown by star, we don’t use a simple average. Instead, our system considers things like how recent a review is and if the reviewer bought the item on Amazon. It also analyses reviews to verify trustworthiness.

BK Baines
TOP 500 REVIEWER
3.0 out of 5 stars 3 Solid Stars
Reviewed in Australia on 26 January 2018
Verified Purchase
Probably didn't enjoy this set as much as the first, having said that it still had some enjoyable moments and the books are easy to read!

Tall, Dark and Panther - 3.5 Stars
I liked this one, it was quick and easy to read.
Maybe a little too much focus on Maya's weight and her need to express how comfortable with herself she is, otherwise she was a very likable character.
Noah was swoon worthy and he came across as the strong silent type but wow was he a dirty talker during the intimate scenes, they had great chemistry together and certainly steamed up the place.
The whole ex stalker (Bud) thing was a little wishy washy and could have given the story that little bit "extra" but well just seemed to fall flat for me with Bud finding a new girl and moving on super quick?!?!
No real new interesting secondary characters but overall a good addition to the series.

The Alion King - 3 Stars
Is it just me or did the whole living on another planet thing come out of left field??? Maybe I missed previous mentions of where shifters originated!?! Not usually a fan of alien type stories, though I must admit this one wasn't hugely different from earth happenings and other then a few colour differences and technological advances not really "alien" in mu option, thankfully.
Alyx wasn't too bad for a King and I could actually understand his desire to omit the truth of who his was at their first meeting, she did have a preconceived notion of the King so it made sense. Otherwise he was pretty drool worthy. (don't take an notice of the cover an is a bit disappointing!)
It was nice to see a nice mature leading lady, someone who didn't overreact or have any too stupid to live moments. Accepted living on another planet really easily but as it was a shorter story this is understandable.
Lots of interesting secondary characters that I'm sure Gerri will work her magic on!! Overall an ok addition to the series.

There's Snow Escape - 3 stars
Another quick addition to the series that was easy to read but probably one I wont need to revisit.
The chemistry between the 3 was ok and the intimate scenes were certainly steamy but I didn't really feel the connection when they had their clothes on for some reason.
Lots of interesting secondary character but after the 7th book in the series it is starting to feel a little same story just different character names.
Overall an ok story with no real wow moments for me.

Julz311
TOP 1000 REVIEWER
5.0 out of 5 stars A whole new world
Reviewed in Australia on 11 March 2016
Verified Purchase
I have thoroughly enjoyed this series so far, books 5-7 in this set have kept the flow of consistency even more than the first set. Gerri keeps up her crazy ways of matchmaking the perfect human with the perfect shifter, but as you will see come book 6, The Alion King, that it takes in a whole new world.
It's as simple as this, if you've lived the rest of the series, you will love these next installments.
Milly has done an amazing job with this series and I can't wait for the next book.
Read more
Helpful
Comment Report abuse

Des
4.0 out of 5 stars Paranormal Dating Agengy
Reviewed in Australia on 26 August 2016
Verified Purchase
I enjoyed this series despite being older than the normal people that read this genre. I guess I never got past weres or vampires from my youth. The series got me in & I spent many a night reading instead of sleeping. A good read from a good author
Read more
Helpful
Comment Report abuse

jamoz23
TOP 50 REVIEWER
5.0 out of 5 stars One of my favourite series of books.
Reviewed in Australia on 31 January 2017
One of my favourite book series out there, have read them so often, they are great to read in bed and relax, you will not be disappointed.
Even though I have all these books individually I love having them in a box set for easy rereading.
A lot of fun crazy characters that are bought together by Gerri, a very good matchmaker.
Reviews have been posted individually as well.
5 - TALL DARK AND PANTHER
Maya was sick of jerk boyfriends treating her like rubbish because she is a big girl. She allows Gerri to set her up on a date.
I did like that Maya did think about whether subconsciously, she had allowed herself to be drawn to jerks due to low self-esteem due to having a slim mother and sister may have added to her life choices.
I really hated her mother and sister, they are horribly mean to her and always on at her about her weight or going to the gym. They also set her up for dinner with the ex-again. Then her mother is rude to Noah because he is a shifter. No loss if she never speaks to them again.
Noah has been Maya’s neighbour for months and has known that whole time she is his mate but unfortunately she had a boyfriend. When Gerri sets him up on a date with Maya he is over the moon and pounces as soon as she arrives.
I loved that Noah listened to Gerri and gave Maya time to think and sort herself out.
Maya’s ex-boyfriend will not go away but after Noah gives him the fright of his life.
6 - THE ALION KING
Gerri gets a much needed assistant at long last in Bella. Bella is Tally's cousin and Gerri takes her on a trip to another world to find a Lion King a mate.
Aurora is a shifter planet and the King has to be mated by his 100th birthday or there are repercussions. Alyx the King is in desperate need of a Queen. Despite turning down Gerri’s help previously he has not been successful finding a mate on his own.
Even though he stated he needed no help finding a mate, Alyx has to eat his words and beg Gerri for help. Meeting Bella makes his lion roar and his heart happy.
Bella meets a man in the library who rocks her world, what Bella does not know is that (TREY) is really Alyx the King.
Not telling Bella who he really is and that she is his mate comes back to bite him when his nasty jealous cousin helps get Bella kidnapped.
All ends happily though and Gerri gets another match.
7- THERES SNOW ESCAPE
I cannot say anything bad about this series or anything else Milly has written. Each book is such a fun light hearted read and I hope there are many more written for us to enjoy. Life needs some fun to lighten our loads.
Another triad of wolves in need of their third ask Gerri for help finding a mate.
Brecc and Eros are the Alpha and Omega of the Ice Mountain wolf pack and need a third for their triad before the elders make them accept someone of the elders choosing.
Charlotte goes to Aurora to attend and be bridesmaid for her best friend Bella's wedding. There she is introduced to Brecc and Eros who realised at first sight Charlotte is their mate.
Charlotte is invited to visit the Ice Mountains and Brecc and Eros must use this time to get Charlotte to know them. Eros is easy as he is light-hearted and emphatic being the Omega but Brecc is very solemn and exhibits no feelings, putting Charlotte on edge around him
Whilst this book was not as laugh out loud as some of them it was still enjoyable.
I know the series is based around big girls finding the right one (or two in some cases) and even though the heroines are positive about their sizes, I feel it is being overemphasized.
Read more
Helpful
Comment Report abuse

Kelly
5.0 out of 5 stars Need more
Reviewed in Australia on 15 January 2019
Once again I find myself wanting to read more
I love Milly's PDA book and will continue to read until I have read all her books, then I will re-read them
Read more
Helpful
Comment Report abuse

Amazon Customer
5.0 out of 5 stars Curvy girls
Reviewed in Australia on 11 February 2017
As always Milly's books are filled with sexy men and big beautiful women, they're short and sweet, but have a good story line with wonderful characters that you just can't help but fall in love with.
Read more
Helpful
Comment Report abuse
See all reviews

Kindle Customer
5.0 out of 5 stars Panthers, Alien Lions and Wolves
Reviewed in the United Kingdom on 19 July 2019
Verified Purchase
Maya is fascinated by her quiet neighbour, not aware that he sees her as his mate. Invited to a charity ball, Maya meets Noah, a panther.

Bella has become Gerri Wilder's admin assistant, supposedly to organise her office when an galactic s.o.s. is received. Transported to a shifter world where the King needs a mate. Misunderstandings ensue before all ends well.

Charlotte is surprised by the visit from Gerri. On being told that her friend Bella wants a wedding dress and trusts Charlotte's choice when they arrive at the castle. During the wedding, she sees two men looking at her. Invited to their home for a visit, not knowing that she is their mate. Trouble happens and it takes time for trust to build before there is a happy ending.
Read more
Report abuse

Danielle Convery
4.0 out of 5 stars Great stories
Reviewed in the United Kingdom on 24 September 2020
Verified Purchase
I have enjoyed all of the stories through the paranormal dating agency my only issue would be that i feel sometimes the 'human' issues/doubts/fears get resolved too easily.... But hell wish i had a real life gerri😂
Read more
Report abuse

Fluffyfangs
5.0 out of 5 stars Just had an amazing week
Reviewed in the United Kingdom on 14 August 2018
Verified Purchase
Reading volume 1-4 of this series of panty wetting hotness. Highly recommend sizzling hot and endearing stories I want one or two sexy shifters for myself now 💖💖💖
Read more
Report abuse

Andrea Nelson
5.0 out of 5 stars Enjoyable read
Reviewed in the United Kingdom on 30 November 2018
Verified Purchase
Fantastic read if you love fantasy novels. I enjoyed it
Read more
Report abuse

Hanbarn
5.0 out of 5 stars Recommend this set of books
Reviewed in the United Kingdom on 7 March 2017
Verified Purchase
Love, love, love this set of books. Great little stories, infused with sass and humour and of course sexy alpha men.
Read more
Report abuse
See all reviews
Get FREE delivery with Amazon Prime
Prime members enjoy FREE Delivery and exclusive access to movies, TV shows, music, Kindle e-books, Twitch Prime, and more.
> Get Started
Back to top
Get to Know Us
Make Money with Us
Let Us Help You
And don't forget:
© 1996-2020, Amazon.com, Inc. or its affiliates