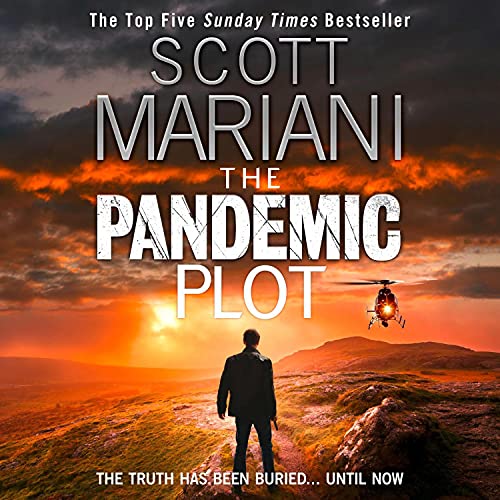 The gripping new Ben Hope thriller from the number one best-selling author.

When ex-SAS major Ben Hope is urgently recalled to the UK from his base in France to assist with a family crisis, little does he know that he’s about to be drawn into one of the most dangerous missions of his career: his son Jude has been accused of a brutal murder, and all the evidence points to his guilt.

To prove Jude’s innocence Ben embarks on a wild chase, facing up against mysterious killers and piecing together a fragile web of clues. What connects an all-female criminal gang from the early 1900s called the Forty Elephants, a century-old vendetta and a shadowy government conspiracy that claimed millions of innocent lives?

Along the way Ben teams up with his former acquaintance, rugged Detective Tom McAllister. They’re heading for a showdown in the wilds of Cornwall, and the villains have no intention of letting Ben come out of it alive....

Switch between reading the Kindle book & listening to the Audible narration with Whispersync for Voice.
Get the Audible audiobook for the reduced price of $11.49 after you buy the Kindle book.
Learn more about membership
By completing your purchase, you agree to Audible’s Conditions Of Use and Privacy Notice.
Sold and delivered by Audible, an Amazon company

4.6 out of 5 stars
4.6 out of 5
1,324 global ratings
How are ratings calculated?
To calculate the overall star rating and percentage breakdown by star, we don’t use a simple average. Instead, our system considers things like how recent a review is and if the reviewer bought the item on Amazon. It also analyses reviews to verify trustworthiness.

Marjorie Day
4.0 out of 5 stars Really.
Reviewed in Australia on 24 June 2021
Verified Purchase
Really enjoyed this book, I like a fast paced story, but it must
Have detail to keep my interest, this ticked all the boxes
Read more
Helpful
Report abuse

Kaye Rowe
5.0 out of 5 stars The Pandemic Plot
Reviewed in Australia on 5 June 2021
Verified Purchase
Another very exciting adventure with Ben Hope from the author, Scott Mariani. This plot is very similar to what the World is going through right now with the coronavirus pandemic. We are yet to find out if it is a man made virus or other natural sources.
Read more
Helpful
Report abuse

Julie Johnson-begg
TOP 1000 REVIEWER
5.0 out of 5 stars Another top shelf read
Reviewed in Australia on 20 May 2021
Verified Purchase
Ben Hope is out to save his Son Jude who has been wrongly accused of murder. How ever this is just the tip of the spear. There are more nefarious and historical wrongs that are yet to be exposed. Another tightly written full on action adventure.
Read more
Helpful
Report abuse
See all reviews

Mrs. T. Mannell
3.0 out of 5 stars Watch Out For The Fireworks - No... more of a damp squib
Reviewed in the United Kingdom on 2 July 2021
Verified Purchase
For the most part I have really enjoyed the Ben Hope books. At the beginning Scott Mariani was writing good, powerful action thrillers, where our hero overcame all kinds of odds, using his wits, his skills and training to put the baddies down. A couple of books previously, the middle part of the book was all the telling of a historic event, with no action, boring single person dialogue. It's happened again in this book. The writer has reverted to a single person giving the reasons to the "pandemic" of the title. That the Spanish Flu outbreak post-WW1, was in fact a man-made virus which swept across the world - using the movements of people and soldiers to transmit the virus. It was tied into the nefarious actions of a wealthy man, a secret diary and a gang of ruthless criminals. Ben's involvement takes place as his son gets charged with murder and placed in jail on remand. In usual Ben Hope style, he's not having any of this and goes off to find out why. There's a few deaths of armed henchmen, and then my disappointment in how the character of Ben Hope acted really left a sour taste in my mouth. Someone is killed, someone central to the story, and Ben's favoured BMW Alpina is shot to pieces as he escapes. Rather than showing consideration for the family of the man, Ben does something - for me - completely out of character - and from then on, the story was just flat and boring. Even the ending, usually a gun battle with body counts rising, but where you know they'll do no one else harm, pink twine sealed their fate. Mariani needs to up his game after this one. The good points, we didn't have Hope fawning over his girlfriend, as she'd dumped him at the start, and McAllister, from one of the previous stories fetched up, and became a central character. I realise it was his presence preventing the blood bath ending we know and love but hey... Let's Hope the real Ben appears in the next book. NB: I have received details of a new series Scott Mariani is writing, involving the policeman included in a couple of Ben Hope books, MacAllister, and perhaps he's involved in this character, just spinning out the Ben Hope books in a formulaic way. Would answer why this book doesn't do it for me
Read more
One person found this helpful
Report abuse

Mr Peter Boulton
1.0 out of 5 stars Like it's been written by a different author...
Reviewed in the United Kingdom on 17 May 2021
Verified Purchase
Let me start by saying I've really enjoyed all the Ben Hope books so far, some more than others, but always enjoyed them. This one however felt as though I was reading a book from a different author. Like it was a different Ben Hope with weak and unrealistic engagement between the main Characters. The story itself seemed rushed with little depth, a real shame. Not sure I'll be buying the next one.
Read more
6 people found this helpful
Report abuse

Sandra F
4.0 out of 5 stars The Pandemic Plot
Reviewed in the United Kingdom on 4 August 2021
Verified Purchase
The Pandemic Plot is number twenty-three in the Ben Hope series and, trying not to sound too clichéd, they just keep getting better and better. During a quiet spell at Le Val, Ben gets a frantic phone call from his son Jude; he’s been accused of murder and has been arrested. Ben drops everything and heads for Oxford, but is at a loss as to how he can rescue Jude as all the evidence seems to point to his guilt.
This story is slightly different from Ben Hope’s usual high-octane, action-based adventures, but none the worse for it. There is more detective work in this one, and Ben joins forces with DI Tom McAllister (he previously featured in The Bach Manuscript) to try to find the pieces of the puzzle that will prove Jude’s innocence. This also paves the way nicely for The Cage, the first volume in Scott Mariani’s new detective series. This partnership works well and ensures a much lower body count than usual, or else Ben would probably find himself locked up too.
With very little to go on, Ben’s desperate search for the truth takes him on a journey from Oxford to Hunstanton on the north Norfolk coast, by way of London, and eventually to a showdown on an isolated Cornish farm. There is quite a lot of historical background to take in, as is normal in Ben Hope adventures, but it is introduced naturally into the story until Ben knows exactly what he has to do to clear Jude’s name.
The excellent characterisation is what makes this series so memorable. Ben Hope’s adventures take him all over the world, but the main focus is always on how he overcomes the obstacles placed in his path, and emerges victorious no matter how hopeless his situation appears to be. Ben Hope will return in The Crusader’s Cross later in the year.
Read more
Report abuse

Kindle Customer
4.0 out of 5 stars I dont like Jude.
Reviewed in the United Kingdom on 6 November 2021
Verified Purchase
Not one of Scott's best.

Any book that has such an unlikeable character as Jude cant be a favourite of mine. Jude is an entitled arse without any endearing quality and I wish hed been left behind on the Star of Africa.

His reckless behaviour then resulted in the deaths of many people and that, plus the sequel seem not to have affected him in any way.

His role in the body count of this book too doesnt seem to disturb his sleep in any way. I truly hope we dont meet him in any future Ben Hope books as I wont buy them.

The overarching story was entertaining but not as good as usual but the information on botox was very interesting as was the historical information about the 1918 pandemic. I'm sure the Forty Elephants was a real thing, too. Who could make up such an unwieldy title for a criminal gang?

I'm sure the statistics are historically accurate as Scott really does his research but I preferred the Forgotten Holocaust to this type of plot.

I still wish Ben would pack in the Gauloise, though.
Read more
Report abuse

policarcass
4.0 out of 5 stars 23 and still going strong
Reviewed in the United Kingdom on 10 June 2021
Verified Purchase
I've just read a couple of the other reviews and was surprised some didn't like this one as much. But that's great and everyone should have there own opinion. As you can see from the title I've read them all and have enjoyed some more than others. This one is slightly different in places but I found myself sneaking off to read the next chapter and is a real page turner. Stick with the middle bit, it all becomes apparent at the end.
Read more
2 people found this helpful
Report abuse
See all reviews