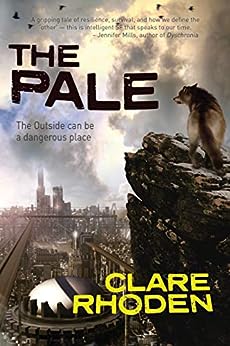 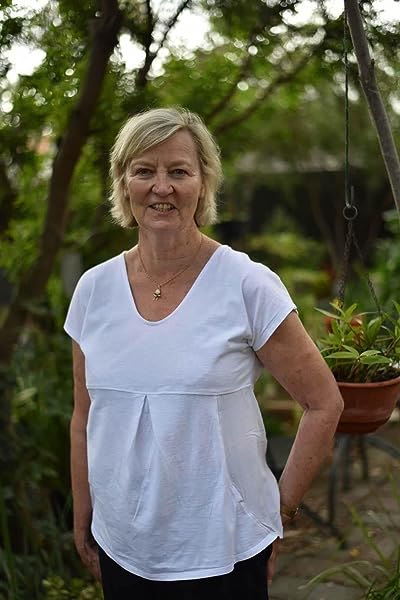 The Pale (The Chronicles of the Pale Book 1) Kindle Edition

A gripping tale of resilience, survival, and how we define the 'other' - this is intelligent SF that speaks to our time.' --Jennifer Mills, author of Dyschronia and fiction editor at Overland

Clare Rhoden is a Story Dog Literacy Programvolunteer, and debut fiction author. A former speech pathologist and university lecturer, she enjoys reading pretty much above everything else - except of course her dog Aeryn and her garden. --This text refers to the paperback edition.

Shell
4.0 out of 5 stars Intrguing and thought provoking
Reviewed in Australia on 4 November 2018
Verified Purchase
When I first started reading this book I wasn’t sure if I was going to like it. It had a slower pace than my usual reads and there was some head hopping as it introduced the four distinct sets of people that inhabited the post-apocalyptic world. But as I read on I found myself drawn in to the story more and more while watching the human boy Hector grow up in the Pale, the city of the humachines, while the canini fought for survival after the earthquake that decimated their denning sites and hunting grounds. I grew to care about the people of the tribes as they mourned the loss of many of their loved ones and strove to keep the remaining members alive, and watched with interest to see how those in the Settlement would react to the calamity that had befallen them and their allies.
The world came alive for me, through the characters, the dangers they faced and their actions toward others. In the Regent, ruler of the Pale, I found a character I loved to hate. She was contrasted perfectly with Tad, the humachine who was considered to have too much empathy. His actions to save a human boy revealed the human side that had been suppressed in the other humachines. In the caste system of the Settlement, I found a leader worthy of the title of Chief as Valkirra struggled to do what was right for her people, even if that meant going against custom and the guidelines of the Temple. But it was the canini and the tribes that offered the most hope in the dark times, with the way they cared for their own and for others, and worked to live lightly upon the land that provided both food and shelter. It offered hope that all was not lost for humanity in the dark shadow of the cataclysmic events that rocked their world.
It was wonderful to see some of my favourite characters meet up and join forces despite their differences, even as I worry what the future holds for them considering the events taking place in the Pale toward the end of the book. One thing is for sure, navigating the dangerous landscape they live in will not be an easy task, and I am looking forward to reading the second book in the series to find out what happens next. In all, this story might have had a slow start, but it made up for it with a heartfelt message of hope amidst so much adversity.

Isobel Blackthorn
5.0 out of 5 stars Classy Sci Fi!
Reviewed in Australia on 22 July 2019
Verified Purchase
The Pale is science fiction set in a post-apocalyptic dystopia. Amid the destitution of the Broad Plain, the Pale itself is a policosmos, a walled colony ruled by a tyrannical Regent and filled with humachines – machine-augmented humans not known for their empathy. Tad, a humachine that cares a little too much, lets in a human child, Hector, when he arrives at the Pale's gate. Outside, the caninis struggle to survive after a devastating earthquake destroys their habitat. The tribes and the Settlement also struggle for survival. Four groups, four distinct societal structures. What unfolds is a tightly woven plot that centres around a struggle for survival in the harshest of conditions.

Rhoden demonstrates tremendous descriptive powers and impressive world building, The Pale reminiscent of the intelligent science fiction novels of old. I am reminded of my favourite science fiction author, Phillip K. Dick. The Pale is filled with well-crafted and engaging characters – including dogs –  in what amounts to a classy read with an important moral message, making the reader question where we are heading and whose side we are on and what it means to be fully human. Add to this an elegant writing style which makes The Pale accessible to teens and adults alike, and I imagine it won't be too long before this novel catches on big time.

The allegorical aspect of The Pale provides much fodder for contemplation in today's pre-apocalyptic climate change reality, something all good high school teachers should relish were they to lay their hands on copies for their classrooms. In all, Rhoden has penned a feast for the speculative fiction aficionado.
Read more
Helpful
Report abuse

Mark ODwyer
5.0 out of 5 stars Can ordinary human kindness be our best hope for survival in even the most terrible conditions
Reviewed in Australia on 11 November 2019
Verified Purchase
Imagine a landscape more forbidding than Central Australia, the Sahara, the Atacana desert. A landscape still shifting with the after shocks of a cataclysmic event that, 197 years before 'The Pale' begins, destroyed most species.

'How does anything live out there?' Tad murmured. Serviceman Tad patrols the Pale, the last place left that bears any resemblance to a city. Within the walls exist - you can hardly say 'live' - a hierarchical society of citizens who, like Tad, are partly liveware (tissue) and partly hardware. The Pale has wholly adopted technology and rationality as its survival mechanism. Subservience by the citizens to the poli-cosmos is the order of the day. (I think it no accident that the author's use of 'policosmos' without a hyphen somehow gives it an overtone of 'police state'.) Even so, there are unsettling signs in at least two Servicemen, Tad and his protégé Hector, of the Pre-catalcym human trait deemed most dangerous: empathy. The story of how this 'weakness' affects the Pale could have made a good novel in itself, I think, but Clare Rhoden interweaves it with so much more.

Outside the Pale, somehow life clings on. Here subsist the humans (fully liveware) of the Settlement. In their zeal to live up to Pre-cataclysmic ideals they have turned to biology. Strict breeding protocols result in a caste system. Beyond the Settlement roam Tribes. Some tribespeople have close bonds with the packs of Canini, wolf-like creatures. I defy any reader to not be fascinated by the Canini. Their codes and imperatives also serve as a contrast with the humans. All living things fear the Ferals, hybrids of biology and machine, a nightmare offspring of the former technological world. These scour the plains hunting biofuel i.e. flesh.

Clare Rhoden quickly establishes this ghastly world in our minds. At the same time she moves the narrative along with fascinating characters to care about. I particularly liked the depiction of how the mentality, society and even biology of humans could evolve to accomodate the need to survive and also to try to eliminate the weaknesses and disasters of Pre-Cataclysm humanity. In some dystopian stories all we really see, I think, is the last angry male humans mindlessly fighting each other to the last club and bullet. Here, to my relief, and I'm sure yours too, we have leaders, mostly female, relying on mutual respect, discussion, and the cross seeding of ideas between groups. This intelligent and thought provoking series looks at how the best attributes of we humans, empathy, hope, kindness, can have the power to raise us above struggle and misery.
Read more
Helpful
Report abuse
See all reviews

Malve von Hassell
5.0 out of 5 stars A riveting fantasy
Reviewed in the United States on 14 July 2021
Verified Purchase
When reading the first in this series (Chronicles of the Pale) by Clare Rhoden, I felt a bit like an anthropologist experiencing culture shock in the course of doing fieldwork among a little known culture. In fact, she created four complete sets of cultural contexts, that is, four very different sets of communities trying to survive in the aftermath of a major cataclysmic event. These are the humachines, the tribes, the people living in what was called the settlement, and the canini, a world of canines with an ability to communicate through mindspeak. The connecting link is Hector, a young man who had been orphaned only to be raised in a society of people altered and enhanced by technology to such an extent that they are described as humachines by members of the other societies. The world building is phenomenal, with vivid details injected into the story.

The author has created a fascinating, multilayered, and complex world. At times, I felt a bit overwhelmed, bouncing around among the various cultures. But that is not a criticism; if one sticks with this book, one is richly rewarded. Several themes are raised throughout the book—the challenges of communication among groups with entirely different cultural expectations, questions of ethics, for instance in regard to population control as well as exploitation of labor, and questions of what makes a viable community. Throughout the reader is reminded that cultures change constantly and that some patterns of behavior that may have been adaptive at a certain point in time need to be reconsidered. Just like anthropologists have repeatedly discovered in the course of such fieldwork, the strange and inexplicable after a while becomes more comprehensible at the same time as one finds a number of familiar patterns of behavior and cultural dynamics. The “other” is not as different from oneself as one might think.
Read more
Report abuse
See all reviews
Back to top
Get to Know Us
Make Money with Us
Let Us Help You
And don't forget:
© 1996-2021, Amazon.com, Inc. or its affiliates