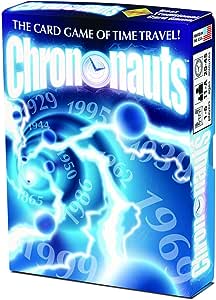 In Chrononauts, each player becomes a time traveler, with a unique identity and a secret mission. During the game, players travel backwards and forwards through history, doing all those things people have always dreamed of using a time machine to do: Visiting the great moments of the past, peeking into the future, collecting up impossible artifacts and priceless works of art (at the moment just before history records their destruction), coming to grips with the paradoxes of time travel, and of course, changing pivotal events and altering the course of history itself. How would the timeline be different if Lincoln and JFK had not been assassinated? And is that the version of reality that you came from originally... the one you must return to in order to win? It's all packed into a fast and easy Fluxx-style card game that will take you to the beginning of time and back again.

4.6 out of 5 stars
4.6 out of 5
218 global ratings
How are ratings calculated?
To calculate the overall star rating and percentage breakdown by star, we don’t use a simple average. Instead, our system considers things like how recent a review is and if the reviewer bought the item on Amazon. It also analyses reviews to verify trustworthiness.

ACR
3.0 out of 5 stars A good game
Reviewed in the United Kingdom on 16 February 2014
Verified Purchase
I like the idea, the game play is unusual. However, it can be really hard to win, if you are simply not getting the right cards, you can't really strategise much, a lot of what you do can be undone by other players, not because they try to stop you from winning, but often just because that's the cards they have at hand. There are two way of winning - either you change the past in the way to suit the universe you come from (each player chooses a character card at the beginning at random, which states how the events have to be changed for you to win - that stays hidden, so you can't actually know for sure if your actions disturb someone else or not), or to collect relics from the past, that you put in front of you, and they can be taken away by other players at any time, if they hold the right card. Ultimately you have to fix paradoxes that appear, by someone changing past events, to get cards, so you might actually find that your action makes someone else win.

I like hidden identity games, but this one doesn't really play like one; unless you know all the characters by heart, you are unlikely to figure out what other players need to win, so it's hard to stop them from doing so. So you can only focus on what you are doing and that can be difficult, if you simply don't pull the right cards.

I still play it, just less and less often, as there is plenty of better card games out there.

Nick Welford
4.0 out of 5 stars Initially confusing but ultimately fun game.
Reviewed in the United Kingdom on 30 September 2015
Verified Purchase
This game is great but there is a learning curve. My advice is to lay out the card as instructed and play through an open round first to get the feel of things, it's well worth it as there is a great game beneath the initial confusion. It's all about manipulating a time line to achieve your goals, but if you change one invent in history this has ripple effects which change future events, this is all controlled by the cards and makes sense when you see it. If you are looking for an engaging fun game then check this out. Be warned - it can take over an hour the first few times you play!
Read more
One person found this helpful
Report abuse

Laclos
5.0 out of 5 stars I bought this years ago and am still playing
Reviewed in the United Kingdom on 24 October 2020
Verified Purchase
I love science fiction
I love time travel
I love puzzles and I love games with depth.
So I am head over heels in love with this game!
FYI - I also heartedly recommend this game so what are you waiting for?!?!?!

Becca
1.0 out of 5 stars Thanks, I hate it.
Reviewed in the United Kingdom on 26 October 2019
Verified Purchase
This game is just not fun. Very difficult to get to grips with and with little reward. In games with 2 people the game it usually over within 5 minutes. Very expensive for what it is.
Read more
Report abuse

Harry Matter
4.0 out of 5 stars Vague rules but probably the best in it's category.
Reviewed in the United Kingdom on 16 May 2017
Verified Purchase
This game has vague points where rules are bendable and it is hard to find information about an exact problem on internet, other than that, there are not many choices for the card games related to "time travel", so I would purchase this again even if I knew about the lacking points in the rules.
Read more
Report abuse
See all reviews
Get FREE delivery with Amazon Prime
Prime members enjoy FREE Delivery and exclusive access to movies, TV shows, music, Kindle e-books, Twitch Prime, and more.
> Get Started
Back to top
Get to Know Us
Make Money with Us
Let Us Help You
And don't forget:
© 1996-2020, Amazon.com, Inc. or its affiliates